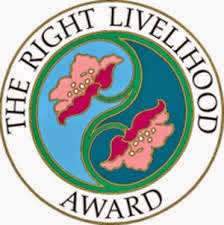 A group of eleven award-winning experts working across Africa has appealed to governments of the African Union to develop ecological organic agriculture on the continent.

The laureates of the Right Livelihood Award, often referred to as the “Alternative Nobel Prize”, who met in Cairo for a 3-day conference, signed a joint appeal calling on the African Union Commission and its NEPAD Planning and Coordinating Agency (NPCA), to implement their roadmap for Ecological Organic Agriculture in Africa.

With regard to the latest findings of the 2014 IPCC report and to the “grave consequences for food security in Africa,” they also called on governments to implement the Maputo Declaration on Agriculture and Food Security and invest 10 per cent of national budgets into ecological organic agriculture including research and development, job creation and rural development. The UN has declared 2014 the International Year of Family Farming.

“We are worried that international corporations are working with the government to cultivate large areas of land for agribusiness. The threat is already at our door", said Nomewende Joël Ouedraogo of the Fédération Naam in Burkina Faso.

Other Petitions Signed To Protect Africa’s Future:
During the regional conference of African Right Livelihood Award Recipients, the Laureates also collectively appealed to the Nigerian government to clean up the oil spills in Ogoniland, as recommended 3 years ago in a UNEP report. As well, they called on the government of the DRC and oil company Soco International to respect national laws and regulations which outlaw all activities harmful to the environment, including oil exploration and exploitation in protected areas, to cancel exploration contracts within the boundaries of the Virunga National Park and to respect all areas designated as World Heritage Sites by UNESCO.

For more information, including the full statements and lists of signatories:
http://www.rightlivelihood.org/cairo2014.html