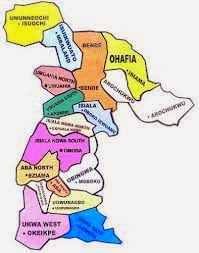 Godfatherism in my own context is a means by which a benefactor exercises active influence or interest in the activities or welfare of his beneficiary or made successor.  The practice of godfatherism has been on and in full exercise since the advent of democracy in 1999.   Some political bigwigs adopted it to maintain a dynasty for fear of being strip of political relevance at the slightest intervention of their political opponents.  Regrettably, their political godsons have strove strenuously to breakaway from this monster particularly in realization of inability to make headway in internal and external socio-political development.  Unfortunately, some affected states have continued to practice it thereby creating more enmity which results to bane on development drive of their areas.

Abia State is known for “God’s own state” the state is described by many as one of the greatest recipients of divine blessing and favour.  By assessment, Abia is seeing as the only state with the presence of almost of all the natural endowments.  Any passer by through Port Harcourt-Aba-Ikot-Ekpene road will without objection attest that the state is decorated with natural resources. If one takes a turn through Port Harcourt-Aba Obehie-Azumini-Uyo road, will also confirm that Abia State present diversity of economic potentials as well as human resources to tap in the potentials.

A feasibility study on Abia South made me wept and consequently declared the zone as being unfortunate to discover herself in Abia State.  The reason is that, the zone possesses the natural economic fulcrum on which the state revolves, yet it is the least in terms of social, political, economic and human development.

My membership with the Movement for Peace and Development in Niger Delta (MPDND), being a Niger Delta base organization in the nine oil producing states, afforded me with the opportunity of touring round the region particularly Abia State, which incidentally, is my state of origin.  Judging from touring experience, Abia State fared better in the past leaving the present from 1999 to date with worst leadership movement.  If you ask me to explain further? My response is, shortsightedness deliberately nurtured in greed and self-centeredness is directly responsible for lack of successive development in Abia State.

For 15 years in which Abia State has experienced the presence of democratic government with huge monthly Federal Allocation coupled with Internally Generated Revenue (IGR) entering the State, it is an uncontestable fact that with all these, 20% development has not been attained in the Urban Areas not to talk of Rural Areas.

A cursory look at Ukwa East Area of the State will explain largely to you what I meant by lack of total development in Abia State. There is no single Rural Road constructed to the credit of Abia State Government. The only Rural Road attempted to construct by the present Government of Chief Theodore Orji (Umunteke-Mkporobe-Ohuru-Ohanku Internal Road) was graded and abandoned after the Governor flagged off it on December 27, 2008.  The contractor, who was handling the project, is short changed owning to what was described as “Lack Of Funding Commitment On The Side Of Abia State Government”.

Some times, I pause to ask if Federal Government policy does include monitoring of State base development project. For judicious and effective implementation of federal allocation to states, there should be adequate monitoring to guarantee statutory compliance.

Abia State would have been one of the economic viable States considering its huge Commercial activities, if not for Mal-administration.  The Visions of the progenitors of Aba Township was that by now, Aba in her Commercial City Movement would have been translated into one of the technological and commercial nerves of the world.

If Aba that was developed long ago could not dynamically, experience Technological and commercial advancement to compete favorably with Global economic revolution, then, those handling the affairs of Abia State should admit that they have done nothing to justify the mandate they claimed was given to them by the people.

Based on my statistics too, after a recent research I conducted with few of my members on road project development in Abia State, it shows that 95% of internal roads in the State are in total disrepair.  The implication is, the access roads that supposed to facilitate inter-community trade relations are consigned to fate without imminent attention for remedy.  This has no doubt, disintegrated people from inter participatory economic activities in Urban and Rural transactions resulting to economic contraction.

There are varying degrees of criminality invading the state; this is because the level of decay of socio-economic development is alarming.  Otherwise, how can one swiftly approach the law enforcement agents at the slightest security suspicion with no good road network, communication gadget, improved welfare package for the indigenes, etc.

Recently, I read a publication in one of the dailies that credited a statement to Abia State government as the reason for grappling with infrastructure development is attributed to meager resources coupled with huge debt of 19 billion dollars hanging on the neck of the state.  How this debt was incurred need to be explained for proper believe and understanding of the indigenes.  On the contrary, the state should not use the cover of debt profile to forestall the provisions of Urban and rural infrastructure, after all, the Governor, even with the debt profile, is building to himself Mini Estate with expensive edifice as well as his aids in the state executive council, house of Assembly and local government councils.

This period also was entertaining the engagement of People Democratic Party (PDP) in the Appeal Court to reclaim their mandate which according to them was stolen by Progressive People’s Alliance (PPA).  There was high level of financial and counter financial inducement to the presiding Judge, eventually; the highest bidder took the turn.

Since this perverted Judgment of Appeal Tribunal, the State has not known peace.  The Government of PPA that eventually turned to PDP after series of defections in Abia State is characterized by political instability and social stigma, the state is sick and tired of those who are using a wrong mandate to govern her.

It would be recalled that, in the pre-election of the former PPA government that laid to the formation of the present Abia State Government, the dramatic exercise that eventually brought the emergence of Chief Theodore Orji as Governor of the State, threw a serious suspicion to every body on the need to investigate the relationship between the godfather and the godson.  Otherwise, why would one be elected into office while in detention and sworn in 2 days short of the official swearing in day of the Federal Republic of Nigeria? The perpetrators of this thought that the days of political turmoil is gone.  Reversibly, they undermined the fact that by this unscrupulous act, a diversified political retrogression has protruded.  The emergence of PPA government that begat the present government, no doubt, is traceable to godfatherism and it has caused endurable pains to the Chief Security Officer of the State, his detention experience by the EFCC and the subsequent engagement by the Appeal Tribunal and the existed nearly uncontrolled kidnap saga are pointers to bad effect of godfatherism syndrome.

The State has been land locked because of unpopular practice of godfatherism and godmotherism, it is regrettable to note that, the State is under un-extricable financial enslavement owing to habitual sharing formula between the political godfather, godson and associates.  This has contributed largely in causing political, economical, social and academic stagnation and off course, the summary result of it, is poor performance.

What is presently befalling Abia State, is a manifestation of purported election that begot bad leadership and it had infested all the sectors of the State.

The belated decision of the godson that let to the broken away from the shackle of godfatherism is a welcome development; it has brought a big relief to him as a person.

However, careful measures should be taken by those who cluster around him in adopting him as repentant godson especially now that he has numerous scores to settle with his benefactor. I think this has taught the State a great lesson that in subsequent elections, serious consideration should be attached in allowing Abia State indigenes to vote in the choice of the masses.  This is only way the lost glory of Abia State will be restored.

(Nwaigwe writes from Ohuru-Ndoki Community Ukwa East LGA Abia State. He can be reached via: 08062836738.)
Posted by PublicInformationProjects at 02:25