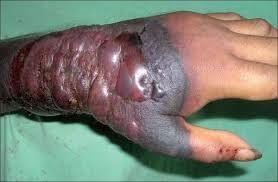 Credit: Federal Ministry Of Health, Nigeria
Ebola Virus Disease is a highly infectious and deadly disease affecting humans and animals such as monkeys, gorillas, Chimpanzees, bats, birds, reptiles, amphibians, arthropods. The disease is caused by Ebola virus and it occurs in sporadic outbreak.

Where Is Ebola Virus Disease Found?:
Though the natural habitat of the Ebola virus is unknown, Ebola virus is normally found in an animal host that is native to the African continent.
Where Do Cases Of Ebola Virus Disease Occur?:
Outbreaks of Ebola VD have been mainly restricted to Africa. Confirmed cases of Ebola VD have been reported in Africa such as Liberia, Sierrea leone, Guinea, Ghana, Nigeria, the Democratic Republic of the Congo, Gabon, Sudan, the Ivory Coast, Uganda etc. Ebola VD is usually spread within a health care setting. However, sporadic isolated cases may occur unnoticed.
How Is Ebola Virus Disease Spread?:
The manner in which the Ebola virus first appears in a human at the start of an outbreak has not been determined. However, Ebola VD could be spread through the following:
1. Direct contact with an infected animal or human;
2. Direct contact with the blood and or secretions of an infected person especially within families;
3. Contact with contaminated medical equipment such as needles;
4. Reuse of unsterilized needles in hospital;
5. Eating or handling of the carcass of infected animals;
6. Inhalation of contaminated air in hospital environment;
7. Use of infected non human primate/bats as food source;
8. Non implementation of universal precautions.
What Are The Symptoms Of Ebola Virus Disease?:
The incubation period for Ebola VD ranges from 2 to 21 days. The signs and symptoms of Ebola VD include:
1. Fever
2. Headache
3. Diarrhea
4. Vomiting
5. Chest pain
6. Stomach pain
7. Cold
8. Cough
9. Joint and muscles pain
10. Sore throat
11. Weakness
12. Depression
13. Confusion
14. Red eyes
15. Internal and external bleeding
Who Is At Risk?:
1. People exposed to and handling wild animals;
2. People depending on wild animals such as bats as a food source;
3. Mortuary attendants;
4. Health workers caring for Ebola VD patients;
5. Health workers in hospital settings with poor basic hygiene and sanitation practices;
6. Family members of an infected patient;
7. People that go to hospitals with poor hygiene and sanitation practices;
How Is Ebola Virus Disease Prevented?:
1. Avoid contact with the blood/secretions of Ebola infected animals and humans or dead bodies by:
a) Maintain good hygiene and sanitation practices in hospitals;
b) Isolate Ebola infected patients;
c) Dispose of dead bodies of Ebola patients properly in a safe manner;
d) Avoid local traditional burial rituals such as embalming for Ebola patients;
2. Health workers and visitors caring for Ebola patients should:
a) Wear proper personal protective equipment such as disposable face mask. Gloves, goggles,
b) and gown always;
c) Use disposable needles;
d) Avoid reuse of needles or use of inadequately sterilized needles;
e) Avoid embalming of a deceased Ebola patient;