Article: The SCOAN Calamity, The Church In Nigeria 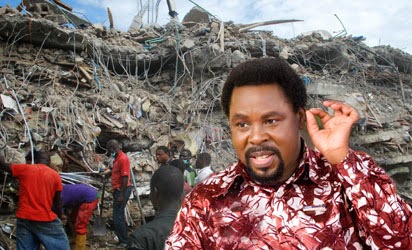 The Synagogue Church Of All Nations, SCOAN, building collapse calamity of Tuesday September 15, will serve as a real test for the Lagos State government’s support for Christians and Churches.


When Governor Babatunde Fashola started off about eight years ago, his government  said the noise from churches within residential areas was too much. It demanded that external cone speakers must be removed to reduce noise level within residential areas, and so on. We painstakingly adhered to the rules in our Church. Soon they discovered that Mosques also use huge external cone speakers and they call for prayers usually very loud about five times every day, from as early as 5am.

If implemented, the law would catch more of Mosques than Churches, so the matter died down. Early this year, I think around February, the President of the Lagos Branch of CAN gave a press briefing after a conference, where he called for the Deputy Governor slot to be allocated to Christians in Lagos State. A short while after after, the man’s church in the Lekki area was pulled down.

But will that stop the cry for fairness in Lagos? I think not, because this week, a pan-Igbo group campaigning for President Goodluck Ebele Jonathan, GEJ, has asked for the Deputy Governor slot to go to Ndigbo. Will LASG pounce on the executives? If they tried it, the consequences may be dire for APC in 2015. The truth is that the time has come for LASG to open up and expand the space between Muslims and Christians in matters of who rules Lagos.

Back to SCOAN.Already people believe LASG will find one reason or the other to clamp down on that church using this opportunity. The man himself, Prophet TB Joshua is seriously pointing to terrorism, and the message to discerning minds is grave.

Immature Christians are busy castigating TB Joshua rather than face the real issues. Some out sheer ignorance or because their GO told them so and so. Some say they don’t know how TB started, but who knows how Elijah started in the same Bible?

Elijah in the book of Judges was described as Elijah the Tishbite, and there is no place called Tish or Tishb in Isreal! Some doubted Elijah’s calling too at that time, and that accounted for his anger against King Ahab’s, Captains of Fifties where he said: “If I be a Man of God”…and the consequences for those soldiers were bad! Drawing from that alone, amidst many more examples, it is utterly futile to use the tradition of men, and man’s history to question God’s call on a person, or argue God’s decision.

Most disown TB Joshua out of sheer envy and jealousy. The man displays God’s power and anointing in uncommon ways, just like in the days of Simon Peter! I pray that God anoints many more like that, and give hell to the devil in Nigeria.

The man is a great credit to the Church and Christianity in Nigeria as Heads of States and foreigners troop to the place, and that’s what the devil hates. The devil hates Nigeria because we curse him and put him to shame at every corner during night vigils, prayer meetings and in our holy altars.

Nigeria is at the centre of End-Time evangelism, and the devil knows it! What Christians often forget is that there is so much hatred against them from the pit of hell, and they are using the world and its leaders, even church leaders, to execute this plan. Their playing against each other over their earthly fight for supremacy is their folly, which their common enemy is exploiting.

If TB Joshua is oppressed by LASG, any Christian General Overseer will be oppressed whenever the opportunity presents itself to do so! The man has been pointing accusing fingers at terrorism, but our Church leaders castigate him and his claims, which are on real life recordings! How many planes have hovered four times over the headquarters of RCCG, TREM, Lord’s Chosen, Deeper Life, Christ Embassy, etc? The list is quite long. None! This plane hovers and soon after its last visit, the building collapses, and nothing is being said?

I don’t know where the boss of  NEMA is coming from but his assertion that if it were a terrorist act, that the whole building will be reduced to rubbles is very wrong. He was too hasty to condemn, perhaps out of frustration from the reported reaction of the Church security.

First, it depends on the kind of bullet that was fired. Second , the extent of damage intended. For example, an appropriate laser bullet fired into a building will go to the foundations and cause damaging ruptures which will trigger a collapse of the building. If broad spectrum bullets or missiles are released into the building collapse will follow.

NEMA should stick to their rescue mission and leave other conjectures to professionals. Buildings collapse everyday, not only in Lagos. It has happened in Abuja,in India, Pakistan,Egypt,  and will happen tomorrow. It is a human failure.

Christianity in Nigeria is under a serious siege, and we must think together to stop it. We must learn from the mistakes of the handling of Boko Haram. The insurgents have sympathy from some people in government, so we are today fighting to recover parts of Nigeria from a small group that could have been silenced two years ago!

Maitastine, Boko Haram,ISIS, Al-Shabab, and the rest of them, are all Jihaddists fighting to eliminate the followers of the God of Isreal! They have no lines between the  Christian denominations.All Christians put together are called INFIDELS, and are expendable! This is why the Church leadership in Nigeria must grow above the denominational bickering, and see the real issues TB Joshua is pointing at!

(Udegbe, a legal practitioner, wrote from Lagos.)
Posted by PublicInformationProjects at 12:04