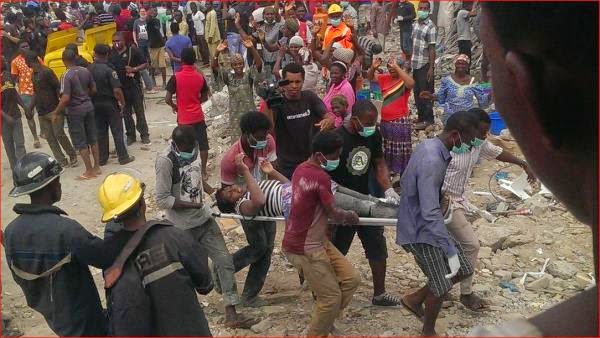 “Thank You, Jesus”, a cry rang out from an onlooker, followed by a burst of relieved applause from the crowd of church helpers and rescue workers. They had been working non-stop since the giant building was reduced to rubble in a matter of seconds the previous day.

From a tiny hole at the far side of the wreckage, a body was being brought out. “She’s alive,” a man beside me reassured. Straining to look closer, I saw the woman, who was being stretchered toward an awaiting ambulance, waving her hands. “God of T.B. Joshua, you are wonderful,” the rescued lady exclaimed, her voice extraordinarily strong. She had been in the dark, under the rubble for over 24 hours.

“Bros,” I overheard a worker confiding in his colleague, “if not for God, no one should be brought out alive from there.” It was hard to disagree with his sentiment looking at the mangled remains of what was a six-storey building nearing completion.

“They’ve found another one,” a cry excitedly broke my musing, another cheer reverberating among onlookers. Despite the tragedy, the spirit of camaraderie was warming to behold. A small child was being brought out of the wreckage alive. “Wait,” one of the rescue team cautioned. “Her mother is still inside.” Moments later, mother and daughter were reunited.

“One thing you have to understand,” an official of Nigeria’s Emergency Management Association (NEMA) official told me on the condition of anonymity, “90% of those being rescued were eating or working the bottom floor of the building when it collapsed.” He shook his head in disbelief. “How they survived beats my imagination.”

“The situation could have turned out much worse,” another member of the rescue team named Sunday corroborated. “If not for God, we could be talking of over 100 fatalities.”

I made my way toward one of the ambulances preparing to leave, hoping to catch a glimpse of another survivor. A man in his late 40s lay there, wet with sweat, bruised and breathing heavily. The discussion I overhead was poignant. “Was I really in that building,” he faintly questioned the nurse as she held his hand. “Thank your God,” she quietly replied. “We should call your name miracle.”

During a three-hour visit to The SCOAN, I witnessed no fewer than 30 people brought out of the wreckage through the concerted efforts of the rescue teams. All were alive.

NEMA officials stated that over 120 people were rescued alive from the rubble with 17 deaths recorded but I was unable to independently verify these claims.

(Njoku is a freelance Nigerian journalist who visited the scene of the tragic incident.)
Posted by PublicInformationProjects at 08:44