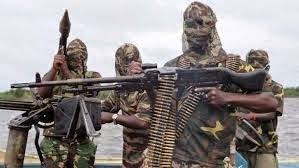 By Emeka Umeagbalasi
Various handling styles adopted by the Federal Government of Nigeria in its prosecution of war and counter terrorism against the Boko Haram terror group have failed woefully to address and tame the violence. Such handling styles have also exacerbated the country’s horrible human rights situations and emboldened the violent armed opposition groups in commission of atrocious crimes against the citizens of the country. From planning/intelligence to field battles; and from aerial assaults to negotiation/ceasefire to information dissemination and management, the results have been very catastrophic and marked with total failures. Unconventional reportorial approaches adopted by the Nigerian media in covering the insurgency warfare have also worsened the situation. Principles guiding modern war media coverage and report are hugely absent in Nigeria. These have deeply worried the Security & Safety Program of International Society for Civil Liberties & the Rule of Law.

Blunders of the warfare have remained the Federal Government’s stock in trade since the insurgency became more disastrous and pronounced in 2009. The latest of such blunders was recent declaration of a unilateral ceasefire by the Nigeria’s Chief of Defense Staff without any convincing and concrete evidence of ceasefire agreement with the Boko Haram terror group.  Just like the recent Stephen Davies’s Phantom Third Party Negotiation, all the fundamental principles guiding modern day ceasefire agreement and declaration are also totally absent in the so called ceasefire unilaterally declared by the Federal Government.

The declaration came days after the Federal Government, for the first time, earned an insignificant military advantage over the Boko Haram insurgents, which was achieved in collaboration with the Republic of Cameroun. The swift collapse of the phantom ceasefire is not surprising. This is because it is a clear evident that the Federal Government till now, is yet to study and understand fundamentals of guerrilla/insurgency/asymmetric warfare including their phases, features, dilemmas and vulnerabilities. The good study and understanding of the Boko Haram terror group in the context of its methodology will bring about better counter terrorist measures to deal with them in line with the international best practices.

For the records, we talk of insurgency when a group of belligerents attempt violently and illegally to change the way a country is governed. There are various types of insurgency including anarchist insurgency, which best describes the present Boko Haram terror uprising.  For guerrilla warfare, it is irregular and protracted warfare launched against a sitting government by voluntary forces usually in small bands or commandos operating outside conventional military organizations.

For terrorism, it involves systematic use of terror as a means of coercion or with intent to create fear or terror in the minds of the people particularly the non combatants/civilians so as to force a sitting government to submit to an ideological pursuit or positional, needs and interests under contention. For asymmetric conflict, it is a violent struggle between two or more States and non State actors or groups who possess considerable level of unequal power relation. In this, one party is regarded as inferior while the other is superior.

Asymmetric/guerrilla warfare is the most difficult war strategy in that it is very difficult to crush. Those who subscribe to this type of warfare also have different strategies to prosecute it. Generally, there are three major phases of guerrilla warfare as developed by Mao Zedong in 1938. Phase 1 involves Organization, Consolidation and Preservation. Phase 2 involves Progressive Expansion (sabotage, terror, active guerrilla warfare and deception) and Phase 3 involves resorting to conventional warfare and abandonment of asymmetric tactics. During this phase, orthodox combatants are formed and deployed to confront the enemy and possibly dislodge it and takeover sit of power.

In features of asymmetric warfare usually adopted by the inferior party (i.e. Boko Haram terror group) there are technologically advanced weaponry, speed and precision, favorable terrain, training and tactics, etc. In features of guerrilla warfare, there are operations, application of terror, surprise and intelligence, population support, blending with civilian population, withdrawal, logistics, terrain, foreign supports and guerrilla initiative & intensity. Main tactics and strategies of guerrilla warfare are intelligence, ambush, deception, sabotage and espionage. There are also ethical dilemmas associated with asymmetric/guerrilla warfare such as intimidation, irresponsible attacks on civilian population, transferred aggression and disobedience of the laws of the war. According to Mao Zedong, when the enemy advances, we retreat; when the enemy camps, we harass; when the enemy tires, we attack; and when the enemy retreats, we pursue.

From the forgoing instances, it is clear that the Federal Government of Nigeria and its military advisers were fooled and deceived into declaring a unilateral ceasefire owing to lack of studying and understanding the war game plan of the Boko Haram terror group particularly against the backdrop of the terror group’s recent setbacks in its war against the Federal Government. In the three-phase guerrilla warfare strategies, a failure at phase two or three automatically means reverting to Phase 1 or 2. Deception tactics such as pretentious acceptance of ceasefire might have been applied by the Boko Haram terror group with a view to rearming or re-strategizing. The military advantage recorded against the terror group should have been sustained so as to force the group into a number of meaningful concessions including real ceasefire and freeing of Chibok girls. The unilateral declaration of ceasefire by the Federal Government of Nigeria and its military advisers was hasty and an infantile calculation.

Condemned is also the way and manner the Federal Government of Nigeria and its military chiefs  turned Aso Rock and the Nigerian Defense Headquarters into owambe carnival celebrating phantom ceasefire and mirage promise for the release of held Chibok girls. On the other hand, those who are desperate to win international awards over their internet campaigns on held Chibok girls compounded the situation by hurriedly ferrying themselves to CNN, Aljazeera and other international media headquarters to celebrate phantom promises made for the release of Chibok girls; forgetting that over 500 of such female vulnerable citizens are still under the captivity of the terror group since January 2014 without any sign of freeing a single one of them since then. As reports have it, release of Chibok girls has not only become elusive but also Mubi and other strategic communities in Adamawa State as well as Borno State have since been retaken by the butchery group with the Federal Government and its military advisers doing little or nothing.

The worst is the continuing lukewarm disposition of the Federal Government of Nigeria and the opposition political parties towards all these. While the country is on fire with dozens slaughtered daily, the political authorities are busy purchasing forms for the purpose of contesting 2015 polls by fire by force. It does not concern them that the terror group has become more menacing by engaging with reckless abandon in all kinds of heinous crimes including war crimes of ethnic and religious cleansing, forceful religious conversion, forceful movement of populations, abduction of the under aged and child soldiering as well as humanity crimes of murder, torture, rape and other terrorist activities. The number of those killed, maimed, displaced and “refugeed” has continued to swell. The Presidency is in the know that the Boko Haram terror group has killed over 13, 000 citizens since 2009, yet it does nothing to tame it. Our estimates have also continued to show that over 5,000 citizens have lost their lives to Boko Haram and Fulani Islamist terror groups since January 2014.

(Umeagbalasi is Board Chairman, International Society for Civil Liberties & the Rule of Law (41, Miss Elems Street, Onitsha Nigeria). He is also a Criminologist & an expert in Security Studies. He is an M.Sc. candidate in Peace Studies & Conflict Resolution)
Posted by PublicInformationProjects at 02:58