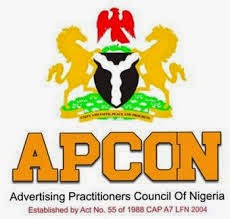 APCON is an  acronym   for “Advertising Practitioners Council of Nigeria”.It  is  a Federal  Government  regulatory  agency set  up  to  control  advertising in  all its aspects and  ramifications in  Nigeria. It  was  set  up under   Act 55 of  1988,  as  amended by Act  93 of  1992.APCON  is  the  umbrella  body  which ensures  decorum  in the  advertising   profession  as  it  co-ordinates  the    activities  of  a  wide  spectrum  of  advertising  groups  in  Nigeria.Some  of  the  groups  which  operate  under  the  canopy   and   strict  surveillance  of  APCON  include advertising  agencies,  media  independents, media  professionals  and  the  like.In  order  to   inject  sanity  and  discipline  in  the   advertising  profession,  APCON   has  a  number  of  departments  which  focus  on  several   areas  of  its  operations .One  of  such   departments  is  the   Advertising  Standards  Panel(ASP)  which   severely  monitors   all  advertisements  and  any  offensive  ones  are     censured. In  order  to   facilitate  efficiency   in  its  operations,  the  ASP  has   classified  products  into  “Controlled  Products “ and “General  Goods  and  Services”. It  is  mandatory  that  vetting   by the  ASP must  be   carried  out  on  all   controlled  products


Fact  is  that  APCON   as  a  federal  government  regulatory  agency  is  in  the  same  family  with  other  regulatory  agencies  in  Nigeria. Suchother  regulatory  agencies  include  the  Consumer  Protections  Council,(CPC),  the  Nigerian  Stock  Exchange(NSE), the  Standard  Organization  of  Nigeria(SON), the  National Agency for  Foods  Drugs  and  Administration  Control(NAFDAC),the  Economic  and  Financial  Crimes  Commission(EFCC),the  Code  of  Conduct  Bureau(CCB), Independent   Corrupt  Practices  Commission(ICPC),the  Securities  and  Exchange  Commission(SEC),the  Chartered  Institute  of  Bankers  of  Nigeria(CIBN),the  Nigerian  Institute  of  Public  Relations(NIPR)  and    some  others.This  brief  outline  is   an  attempt  to  sensitize  the  reader  on  the   relevance  of  the   topic  under  discussion.

Owelle Rochas Okorocha .It  will  not  augur well  for  the   profile  of  Governor Okorocha political  hagiographers  to   note  that   it  was  during  the  regime  of  Governor  Okorocha  that  some   groups used   guerilla  approach to  a  federal   institution  under  cover  of  darkness  and   relocated  it  to  Anambra State. This  is  not  the  kind  of    record    an  active   and  hyperactive  governor  like  Owelle Rochas Okorocha  will  like  to  leave  behind.I am  appealing  to  Governor  Okorocha  to   take   necessary  steps  to   invite  the  top  management  of  APCON    in  Lagos  to   come  and  explain  their   reasons  for  engaging  in  this  guerilla and  covert   approach  to   political  engineering.

It  is  pertinent  to  emphasize  that  in  order  to   effectively  regulate  the   industry, APCON has  classified  products into    two  groups: the  controlled  products  and  the general  goods.

Controlled  Products:The  controlled  products  include  foods, consumables, personal  hygiene  products,  drinks,medicines(over  the  counter  and   consumer  preparations)multivitamins  and  minerals,  all  advertising  directed  at  children, tobacco  products,  alcoholic  beverages,  home  video  promos,financial  services(banks,insurance,discount  houses and  finance  houses), religious  revivals  and conventions,  political  advertising,  trado-medicine advertisements,  ensuring  effective  services  in   telecommunication  services  such  as  service  providers  of  GSM  services as  well  as  sundry   consumer  sales promotions  of   all  categories. It  is  the  responsibility  of  APCON  to   ensure  that   the  above  listed   controlled  products   must  be   vetted  and   monitored  by  the  Standards  Advertising  Panel(ASP)

General  Goods:The  products  that   fall  under  ‘General  Goods  and  Services”  include Corporate ads of  a  general  nature, Medicalequipment, Automobiles,  Electronics and  electrical  equipment,  notices and financial  statements.  Others  include congratulatory  messages,  in  memoriam/obituaries, station  promos(Radio/TV) Household  items,  property  and Oil  and  Energy.

Finally,  I  appeal  to  our  governor,  the  irrepressible  and    indomitable  Governor  Rochas Okorocha to   mobilize  his   bureaucracy  now  in  order  to   bring  back  the   Zonal  office  of  APCON. Owelle  is  able  and  those  who  embarked  on  this   campaign  of   humiliating  Imo  State  will  not  be  spared  by  His  Excellency,  Governor  Rochas Okorocha. A stitch in time saves nine.