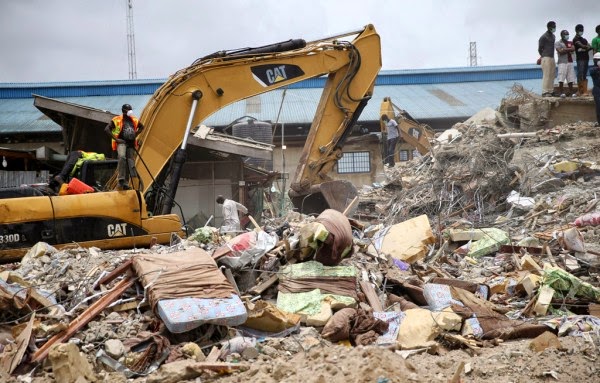 The tragedy that occurred on Friday, September 12, 2014 when a guesthouse located within The Synagogue of All Nations Church (SCOAN) premises, Ikotun, Lagos collapsed, may have begun to negatively reflect in the number of tourists visiting the country.


More than 100 people died in the accident.

In a statement issued by the Airport Car Hire Association of Nigeria (ACHAN)-ITZ (International Terminus Zone) of Murtala Muhammed International Airport, Ikeja, Lagos, and signed by the chairman, Summonu Oseni and secretary of the chapter, Olalekan Agboola, yesterday, the incident has negatively affected the number of people coming into the country.

“The incident does not affect The SCOAN alone, but also Nigeria’s economy,” the statement said. “What happened is a big blow to the economy of the nation, most especially, the airport, as a whole, as most of the tourists to Nigeria are coming to visit The SCOAN; I mean, six out of every 10 tourists come to Nigeria visit The SCOAN. Since this happened, there is no more business and we cannot go on the street anymore.

“The SCOAN is a big brand for Nigeria and a lot of revenues are generated by those involved in the tourism chain, especially members of AHAN-ITZ, who provide nothing less than 35 buses and equally a large number of small vehicles to move these visitors on a daily basis.”

According to the statement, Nigeria is at a point where only decisive actions are urgently needed to restore the country’s pride and dignity.  For the members of ACHAN, it is a critical situation that needs every passionate Nigerian to get involved through prayers and soul lifting messages.

For ACHAN-ITZ, Nigeria’s aim is to achieve increased investment spend, encourage ‘sensitive exploration’ of the country as well as access to the whole country, but this cannot be done if such a brand is allowed to be destroyed by campaigns of calumny and unsubstantiated information or stories.

“We pray that this will not annoy the pastor and founder of the church, Prophet TB Joshua to relocate to another country, as other countries would like to have a man like him, who would boost tourism for their nation.”

It happened in Costa Rica with the siting of Intel’s first Latin American plant in 1996. Likewise, Colombia is today not so directly associated with drugs simply because of the successful marketing campaign for Colombian coffee. Some years back, India was principally known for spirituality and poverty, but today its software; its highly educated people are medical tourism. Countries like Macedonia, Croatia, Malaysia and Japan sell their respective countries on international media networks. Nigeria’s voice needs to be out there too! “And this is what The SCOAN is doing.”

While commiserating with the church over the tragedy, the ACHAN-ITZ prayed that God’s mercy would continue to endure over the church.

Meanwhile, the coroner’s inquest into the tragedy would commence sitting on October 13.

According to a press statement by Bola Akingbade, spokesperson of the Lagos State Ministry of Justice, the inquest would hold at the premises of the Ikeja High Court and would be presided over by Magistrate Oyetade Komolafe.

The inquest was instituted under the Lagos State Coroner’s System Law No. 7 of 2007 for the purpose of establishing the cause and manner of the collapsed building incident.

According to the Chairman of ALSSAN, Mr. Gabriel Agboma: “ We are protesting because the management of FAAN had just chased us out of the car park at the airport,” stressing  “they should have relocated us properly before asking us to leave our current car park.”

Agboma, who wondered how FAAN could do such a thing, said that each vehicle paid the sum of N81,000 to FAAN which, for about 380 cars, amounted to N32 million yearly.

According to him, “FAAN security officials came to our car park at the International Airport around 4:30a.m. and chased us out, seizing the cars they could see and taking them to their pool”.

Members of the union carrying placards, some of which read:  ‘FAAN, we are not slaves, give us standard car park’, ‘Oga/Madam, No comfort at Airport Limousine car park’, ‘Our Mumu Don do, give us befitting park’  chanted protest songs against FAAN for ejecting them.

The drivers also barricaded the road, thereby disturbing free flow of vehicular movement, which led to a long queue along the Airport-Ikeja road. while those with placards had inscriptions on them.

ALSSAN stated that they were disappointed by the action FAAN took despite the fact that they generate so much into the agency’s coffers yearly.

The chairman also alleged that FAAN was asking them to buy a new millennium bus worth N2.8 million, stressing that there was no way they could afford the vehicle.

“We have met with the State Security Service (SSS), Airport Commandant and currently we are meeting with the Managing Director of FAAN over the issue. Our grouse right now is that we need a car park with all the amenities in it.

“They just chased us out this morning and asked us to leave without giving us an alternative car park. We learnt that they want to give the park to Car Hire Association of Nigeria which would be  unfair to us.”

Also speaking a member of the Board of Trustees of ALSSAN,  Mr. Ihioko Monday, said FAAN was not treating them properly.

FAAN spokesman, Yakubu Dati promised to issue a statement on the matter but had not done so as at press time.
Posted by PublicInformationProjects at 11:05