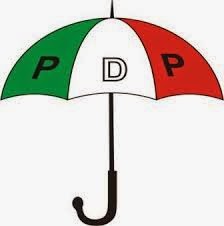 ON September 14, 2014, the office of the state chairman of the Peoples Democratic Party (PDP), Abia State, took a full-page advertorial in THE NATION ON SUNDAY of the same date. The specious publication entitled “DISCLAIMER” was signed by a certain Uchechi Ogbuka, State Publicity Secretary, PDP, Abia State!


In the preposterous and laughable advertorial, the local PDP leadership declared inconsequentially that Kalu “claims” to be a member of the party which, according to them, is not true hence the invidious necessity for the said publication. A boy still in his mother’s diapers knows that Kalu is a founding and staunch member of the PDP. In any case, it is not the responsibility of the provincial arm of any party to confer or “disclaim” membership on anyone. It should interest the grassroots ignoramuses to know that the only organ of the party that has such powers is the National Executive Committee (NEC). Because of their vicious recklessness and idiocy, these peripheral party officials arrogate authority that is clearly above their benefactors to themselves. This kind of lawlessness arising from ignorance about the country’s constitutional provisions and party guidelines is why Nigeria’s party structures are still wobbling instead of being deepened.

Where were Ogbuka and his limping chairman when the foundations for the PDP were being laid? What does their consciousness tell them about Kalu’s irrefutable membership of the ruling party? Can they in all sincerity and fear of God boldly tell anyone that Kalu is not a member of the PDP? Except the marines, no person can listen to such blatancy of a lie. I am sure Ogbuka and his physically-challenged chairman know the truth but the exigency of stomach infrastructure will becloud their deformed senses of propriety and honesty. This kind of tomfoolery is understandable in the hate circumstance that Kalu has found himself fueled by those who are afraid of his towering personality and bursting profile in and out of the PDP. IF some of these theatricals are not thrown up to destabilize Kalu, the fear is that he has the capacity, potentiality and clout to take over the party machinery in the state.

One of the submissions in the circuitous advertorial is that Kalu has dual membership of two political parties in Nigeria which is unconstitutional. “Chief Orji Uzor Kalu is the founder and financier of Peoples Progressive Party (PPA), a duly registered political party.” It has never been in contention that Kalu solely founded and financed the PPA on whose platform Gov. T. A. Orji of Abia State and former governor of Imo State, Chief Ikeddy Ohakim, won their elections before re-defection to the PDP. Subsequently, Kalu also quit the PPA and relinquished his leadership of the party and other appurtenances of authority and control in the party. He also publicly renounced his relationship with the PPA and returned to the PDP. Even while his membership of the PPA lasted, most people knew that his soul was with the PDP! This was massively publicized. So, for anyone to advertise his ignorance and declare that Kalu is still a member of the PPA is to criminalize him for petty reasons!

If the right-thinking members of the PDP at its national headquarters believed this cock-and-bull story by the Abia PDP clowns, they would not have issued the senatorial nomination form to Kalu which had since been returned to the national secretariat. Interestingly, going by the party’s hierarchical structure, the advertorial fiasco is a nullity, null, void and of no effect whatsoever. It amounts to stupidity for one to cut his nose and spite his face which is exactly what the advertorial has achieved.

Another rationalization for the advertorial borders on Kalu’s avid and vehement backing of President Goodluck Jonathan’s forthcoming re-election. Apparently, the local PDP warlords are not happy with the superlative support of President Jonathan’s government and his politics. The implication and fear are that if the trend continues, Kalu may end up hijacking the PDP structure in Abia. Whoever knows Kalu very well will tell you for free that such closeness to the president could sway the tide of local politics in Abia,

Therefore, the Abia PDP needs to thoughtlessly do something to interject that cordiality! I hope that these people remember the constitutional provisions on freedom of association as enshrined in Section 38 of the 1999 Constitution (as amended).

The hollowness of the vacuous advertorial in question is further captured thus: “We do not mind if he (Kalu) decides to support President Goodluck Ebele Jonathan’s legitimate quest for a second term, what we find objectionable is the juxtaposition of his photograph with that of Mr. President (sic) with whom he does not share the same party platform.” Nobody can mind Kalu’s decision to vehemently throw his weight and resources behind the President. As already pointed out, if Kalu was not a member of the PDP despite grassroots wildcat protestations in their deviancy and futility, the gentle and reasonable men in Wadata Plaza, Abuja, would not have issued a senatorial nomination form to Kalu, which had since been duly filled, returned and of course accepted. What is left is for Kalu to mobilize and actualize his plan. The only thing that can stop Kalu is if the PDP insists on its controversial, divisive and undemocratic agreement with governors over the forthcoming polls. As a law-abiding member of the party and responsible Nigerian, Kalu will submit to the party which is supreme in these matters. Otherwise the coast is clear for Kalu to give his people quality representation at the upper legislative chamber unlike the current charade of representational timidity and concomitant passiveness. Abia deserves some vibrancy at the National Assembly—which is the objective of Kalu.

Yet another brainwave: “As a matter of fact, Chief Orji Uzor kalu’s (sic) name is not in any membership register in proper custody.” Who defines “proper custody”: the dispassionate national secretariat of the party or some jaundiced and vindictive local champions? Even if you have grouses about an imaginary enemy, there is still need for articulation, thoughtfulness and coordination of combative strategies. Engaging in kamikaze free for all smacks of insanity and since two persons cannot be mad at the same time Kalu has chosen the path of propriety even in the face of unwarranted attacks and provocative delinquencies which aim at discrediting and disclaiming him by persons he brought to limelight and a few others on inevitable messengerial assignations—all ungrateful and indirect beneficiaries of Kalu’ worst political miscalculation in the history of mankind.

Since Kalu went to the national headquarters of the PDP and took pictures with the national chairman and other executives of the party present on the occasion, which was massively published by newspapers because of its unassailable newsy value, Kalu’s detractors have been rattled, distraught and embarrassed beyond comprehension, let alone measure. Futile efforts had expectedly been made by oppositional forces in Abia PDP to diminish the invaluable picture which removed the veil of mass deception and malicious publications like the subject of this clarification. In all the ingratitude jesting about, time will tell who the villain is ultimately.

Finally, the lugubrious advertorial declares thus: “Be that as it may, Chief Orji Uzor kalu (sic) has no met any of the basic requirements for a returnee.” As I had pointed out here and elsewhere, it is not the duty of the local arm of the PDP to prescribe conditions and requirements for returning members of the party. It is the responsibility of the National Executive Committee of the party. No other organ has such statutory powers.

If anyone deserves “wise counsel” it is not Dr. Kalu but all those who sponsored the vexatious advertorial and similar mischievous jobs that are interminable. At the opportune time, annalists, analysts and historians will chronicle this persecution of a benefactor by his beneficiaries.