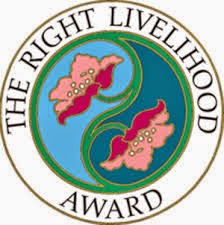 (Being quotes taken from the award speeches of  four awardees)


Alan Rusbridger (UK):
“The internet is the thing they fear. The thing they want to master. The space in which we may all find darkness as well as light. But the very reasons the State wants to tame, penetrate and control the digital universe are the same reasons which make it an instrument of liberty.”

Asma Jahangir (Pakistan):
“There are trillions of dollars spent on so-called security; yet innocent girl victims in Nigeria could not be protected. Such incidents are indications of decay in global governance. Security oriented institutions and individuals are taking the lead in making global policies. Security and economic interests take precedence over human rights and sustainable peace. The gap between expectations of the people and the deliverance of sound governance is widening.”

Basil Fernando (AHRC, Hong Kong):
“It is not the laws set out in the books that protect people. We have such laws in abundance, but the existence of those laws did not prevent widespread lawlessness. The presence or absence of protection is determined by and dependent on functioning institutions of justice, meaning a functional police system, prosecution system and judicial system.“

BILL Mckibben (350.Org, USA):
“We simply must defeat those forces that want to delay large-scale change so they can have a decade or two more profit. There’s no ducking that fight: If you invest in fossil fuel companies, you profit from the destruction of the earth. That’s the definition of dirty money. Those who invest in fossil fuel companies are making a wager that the world will do nothing to combat climate change. That’s an immoral wager. “