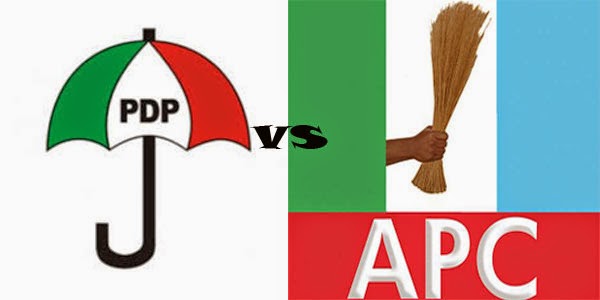 Now that the two main power grabbing contraptions [sorry PARTIES] have selected [PDP] and elected [APC] their Presidential candidates; it is time for us to begin to ask them serious questions and take them to task on their utterances.


What is their election manifesto? Where is their program of action for the four years from May 2015 to May 2019?

After nearly 16 years in power at the federal level; what is the score card? And how is a new PDP Federal government going to act differently and take us out of the current crisis which has become the signal outcome of their 16 years sojourn in power?

What will the APC do differently to radically change the trajectory of our sinking ship of state?
Let us take some of the sectors. First the Power sector which has been the dominant mantra of the ruling party since 1999. 16 years later, after injection of more than $30bn in public investment in that sector, what is the scorecard? We have managed to increase power generation from 3,000MW inherited in 1999 to 4,500MW in 2014, of which at any point in time less than 4,000MW is available for distribution and transmission? Additionally, everytime the old dilapidated national grid is infused with more than 4,000MW for transmission, we witness total collapse of the grid, so much so that for instance between November 2013 and November 2014 the grid witnessed 15 total collapses and 1 partial collapse!

To ensure any appreciable increase in the power situation the three components of power generation, power distribution and power transmission capacities and systems must be improved and their capacities increased. Alas however, although there has been huge infusion of eventually looted public investment into power generation to increase capacity; there has been scant investment in power distribution to increase capacity and no investment at all in power transmission. In fact the last time there was any significant investment to improve and increase power transmission capacity was 30 years ago. This is why every time the grid is saddled with more than 4,000MW it collapses, and this is why even if this light fingered, treasury looting government can through some miracle fulfil its often repeated but worn out promise of increasing power generation capacity to 10,000MW, the available distribution and transmission capacity can simply not accommodate the excess beyond 4,500MW. And why is any serious government not serious about finding out why a whooping $30bn in public investment has come to naught, and why heads have not and are not rolling.

But to be candid, although we know that the PDP can not do anything about our electricity situation other than orchestrating one of the most sustained and intense looting of the treasury over the last 16 years; however what alternative does the APC offer? Where is the APC plan to revamp the power sector, to recover looted funds, to improve and increase generation, distribution and transmission capacity over the next four years?

Let us again take our failure to ensure self sufficiency in domestic fuel refining capacity, the only OPEC member to fail in this regard. The PDP has presided over 16 years of drainpipe investment in the 4 publicly owned refineries, wasting more than $20bn in regular and periodic Turn Around Maintances [TAMs], that have failed to take capacity utilization beyond 40% and which have succeeded only in turning around the private bank balances of criminals in government and in business who alone have benefited from this heinous scam. This lack of adequate domestic refining capacity is the reason we import refined products, and combined with the value of the Naira against the dollar, and the international price of crude, makes its permanently necessary for there to be the lucrative subsidy regime that is manipulated again by the ruling elites and their protectors in government. How much does it cost to build new super refineries? Certainly the more than $20bn wasted on TAMs could have built several brand new refineries with double the present installed capacity and thus making it unnecessary to import refined products.


Again although the ruling PDP has demonstrated that it is incapable of solving this problem, where is the alternative program of the APC to address this problem and ensure self sufficiency in domestic refining capacity? What will the APC do in this regard over the next 4 years?

What about the perennial Niger Delta problem? What is the post amnesty development program to address the totality of the crisis in the Niger Delta? What will be done over the next four years to reverse the scale and scope of environmental degradation in the delta? To rehabilitate and restore the environment? To gainfully and productively engage the more than 2 million unemployed and currently unemployable youths of the Niger Delta? After more than a decade of 13% derivation, of NNDC, of Niger Delta Ministry; after half a decade of the amnesty program; and after 16 years of self rule of the Niger Delta states; what has fundamentally changed in the condition of the delta, it's environment, and its people?


Again other than create a few new Niger Delta Billionaires, and promoting and protecting a lucrative economic crime syndicate in stolen crude, what has the PDP achieved? Ironically due to the scale of the crude oil theft, the scale of leakage into the environment as t result, and the intensity of the economic crime over the last five years, the quantum of spillage into the Niger Delta environment over the last 5 years is far more than in the previous 40 years combined.

Once again Alas there is not the slightest indication that the APC opposition understands the scale and scope of the problem, nor is their any indication that it knows what to do about it.

This is why the choice in the 2015 general elections is becoming more and more akin that the proverbial one between the devil [PDP] and the deep blue sea [APC]!

And this is why it has become historically incumbent on us to intervene collectively in a manner that redirects the focus of the electioneering campaigns; that goes on to force these light fingered politrickians to seriously discuss and begin to debate appropriate responses to our situation. It is why we must organize and mobilise a non partisan electoral movement that regardless of our individual party affiliations or non affiliations, compel politicians to identify, recognize and develop programmatic responses to the existential challenges facing us; extract programmatic commitments from them; and that remains coherent and focused enough to subsequently hold to account on their commitments in the post election period.

This is what we in the Protest To Power Movement [P2PM] will be doing in the short term, as we build up the momentum of a Mass Political Movement that will go from extracting commitments, and compelling accountability to commitments made, to eventually actually challenging these Vagabonds In Power for power.

(Gaskia is National Coordinator; Protest To Power Movement & a Co-convener of the Say No Campaign. Follow me on Twitter: @jayegaskia)
Posted by PublicInformationProjects at 01:11