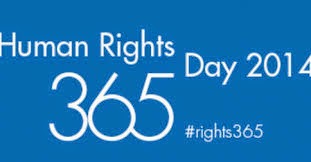 In line with the United Nations’ 2014 slogan Human Rights 365, the leadership of International Society for Civil Liberties & the Rule of Law will hold in Onitsha, Nigeria its 2014 World Human Rights Declaration Anniversary on Sunday, December 21st 2014. As rightly observed by the United Nations, this year’s slogan, Human Rights 365, encompasses the idea that every day is Human Rights Day. It celebrates the fundamental proposition in the Universal Declaration that each one of us, everywhere, at all times is entitled to the full range of human rights, that human rights belong equally to each of us and bind us together as a global community with the same ideals and values. In the same vein, the UN Secretary General, Mr. Ban Ki-moon has called on States to honour their obligation to protect human rights everyday of the year and people to hold their governments to account.

As the world marks today the 66th anniversary of the Universal Declaration of Human Rights, proclaimed and adopted on 10th December 1948, it is our observation that though all human rights are indivisible and indissoluble, yet the civil rights (right to life, dignity of human person, freedom of movement, personal liberty, etc) is the most endangered around the world particularly in Africa and middle east. Holding governments to account over their compliance to, or breaches of human rights obligations; is a noble global call, but what about the unchecked atrocious conducts of armed opposition groups in the course of prosecution of intra- State wars? Of 64 active rebellions or intra-State wars raging around the world involving 591 militia-guerrillas and other anarchist groups, atrocity crimes committed by them far more outweigh those of constituted authorities or sitting governments.

Our referenced coming event contains two powerful and thunderous messages to the entire world and the Federation of Nigeria particularly as the latter prepares for its 2015 crucial general polls. We look forward to the said date.