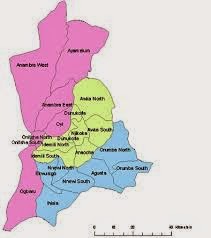 Having carefully followed and studied the recent Ward and LGA congresses conducted by registered and participating political parties gunning for 30 State and 14 Federal Legislative seats including three Senatorial seats in Anambra State for 2015 general elections in Nigeria, we wish to state that a lot of improvements are still needed to the get internal democracy process of the Nigerian Political Parties in the right direction.

A transparent and credible process of party primaries always produces credible winners and bad losers. When reverse is the case, it can trigger off intra party crises of unprecedented consequences leading to abysmal performances in the main elections. In the All Progressives Grand Alliance Party, for instance, allegations of doctoring of results of congresses and selection/imposition of delegates rose to an apogee last week leading to stalemate and complaints of skewed primaries particularly in the State Assembly and House of Reps primaries.

Out of 11 House of Reps primaries conducted last week in the Party, only six produced winners amidst complaints of selection and handpicking of those that voted in the exercise, in utter disregard to the results of earlier Ward congresses.  On the other hand, five House of Reps primaries became inconclusive or stalemated. They are those of Awka North & South, Anambra East & West, Anaocha, Njikoka & Dunukofia; Orumba North & South, Ayamelum & Oyi and Onitsha North & South. The information available to us indicates that tomorrow, December 9, 2014 has been fixed for their repeat primaries.

Out of the three categories of party primaries conducted so far in the State (House of Assembly, House of Reps and Senatorial), allegations of impropriety were more concentrated in the House of Assembly and House of Reps. Reason responsibly for these is too petty and worthless in the eyes of credible democratic process. They range from gubernatorial pact with the State Assembly to avoid impeachment, flushing out Peter Obi’s supporters & structures to gubernatorial spouses’ supremacy struggles with the wife of the President (over the Anaocha/Njikoka/Dunukofia House of Reps ticket squabble allegedly involving wife of the Anambra Governor and her Rivers State counterpart against the wife of the President over the choice of an aspirant said to be a brother-in-law of the Governor of Rivers State).

In the Senatorial primaries held on December 6, 2014, despite the fact that Chiefs Victor Umeh, Ernest Ndukwe and Dubem Obaze emerged victorious for Anambra Central, Anambra South and Anambra North respectively, the fairly popular outcomes are in a verge of being truncated particularly in Anambra North where it is alleged that the emergence of Chief Dubem Obaze did not go down well with some high political actors leading to fresh attempts to cancel the primaries with intent to produce an amenable candidate against the popular choice of the Party.

Latest information at our disposal is that Mr. Obianwu Patrick who came second in the said primaries has petitioned the Electoral Panel of his Party alleging omission of his name. According to facts we dug out as per what transpired in the primaries, Mr. Obianwu Patrick was written in the ballot paper as “Obianwu Patrick Michael” instead of “Obianwu Patrick Onochie” according to him. Mr. Obianwu who was physically present during the primaries and contested in same later accepted the error as harmless and attributed it to “printer’s devil”. He approved at all stages and even on camera the conduct of the primaries with the way his “erroneous” middle name appeared in the ballot papers, only for him to turn around after two days and file a petition to that effect.
For us at Intersociety, there is much to be done in the internal democracy process of political parties in Nigeria. The process is not only bastardized but has also become elitist and a gold mine. To get a political party ticket to vie for any elective office in the country is becoming costlier that the main elections. It has also eliminated the middle aristocratic/noble class and exposed the country’s 1,695 State and Federal elective seats and 12,788 LGA elective seats to political graft and entrusted most of them into the hands of a criminally rich class.

While we congratulate those that have popularly emerged in all the political parties’ primaries in the State particularly the trio of Chiefs Victor Umeh, Ernest Ndukwe and Dubem Obaze, we oppose vehemently any attempt to annul the Senatorial primaries of the Anambra North on the frivolous reasons above referenced. Before trouncing Mr. Obianwu’s petition into the dustbin, the petitioned (Primaries Electoral Appeal Panel) are called upon to peruse the video and camera clips used in the primaries as well as ballot papers, agents’ signatures and result sheets so as to establish express lack of substance in the petition and avail the petitioner an aura of fair hearing and fair play.