Sirs,
Rotational Presidency Among Six Geopolitical Zones And Withdrawal Of The President’s Second Term Ambition A Must To Avert Chaos & Bloodletting Imminent In 2015 General Polls

Formed in 1990, the Igbo People’s Congress (IPC) is the apex Igbo (umbrella) organization in Houston, Texas and an affiliate of the World Igbo Congress (WIC). We, as a body, have been following with great interest the many write ups in the national dailies, internet, and sometime direct exchanges between Dr. SKC Ogbonnia and Senator (Chief) Ike Ekweremadu. First, Dr. Ogbonnia resides in Houston and we know him as a true Nigerian and a staunch, Igbo patriotic son. We must also point out here that we are in possession of the booklet titled “Accomplishments & Constituency Projects Attracted by His Excellency Senator Ike Ekweremadu, CFR”, enumerating the various achievements claimed by the Honorable Senator. We should also point out that we are aware that Chief Ekweremadu is the Deputy Senate President of Nigeria, a position zoned to the South East. By virtue of this position, Mr. Ekweremadu is the highest ranking onye Igbo serving in the present government of Nigeria. This position therefore makes Mr. Ekweremadu not only responsive to his constituents in Enugu State but also to all of South East geopolitical zone and states. For this reason, we did arrange a Town Hall Meeting with our Senator, Ekweremadu, on August 17, 2013, when he was in Houston, which he accepted to attend. The Igbo leadership representatives assembled as scheduled. Unfortunately, not only did he fail to attend the meeting; as at today, the only reason offered by the senator is that the number of Igbo leaders in attendance was not enough for his presence.  Talk about outright disregard, disrespect and careless display of a “larger/mightier than life” mentality.

We hold our leaders in positions of power in high esteem and therefore deserve accountability from them. As such, it is troubling to us as a progressive organization, known for its long history of advocacy for good governance in Alaigbo, to learn that some of the items Senator Ekweremadu claimed to have completed in his brochure are either incomplete or nonexistent. We are, therefore, calling on the Senator to state the facts as they truly are without further delay.  We will not hesitate to escalate this matter to the highest level, home and abroad, if the facts are not presented within a reasonable time.

We, the Igbo People’s Congress, also want to use this opportunity to call on all our elected leaders, including our governors, and other representatives to henceforth desist from publishing false information about their stewardship. Some of our leaders who are not performing but rather would like to exaggerate their accomplishments are hereby called to order.

We are very emboldened by Dr SKC Ogbonnia’s courage to bring this matter to light, and he has our full support in this crusade. We, therefore,   encourage other patriots from other Igbo senatorial zones and states to join us and Dr. Ogbonnia in this call for accountability and transparency in leadership from our Nigerian leaders in general. The era of this leadership narcism is over! Abuse of office must be checked as we demand accountability. We have the vision and the stamina of a people still willing and able to cross new frontiers, to build a great society. Our representatives must understand how grave is their failure to perceive our legitimate needs for participation, our legitimate needs for genuine challenge and genuine engagement in their real task of representation.

Informed by the fact that things do not get better by being left alone, and in recognition of our deeply held faith that rational men can act rationally even under pressure, the Board of Directors of Igbo People’s Congress, Inc. will award Dr. SKC Ogbonnia the organizations Highest Honor – “Speaking Truth To Power Award” for his courage.  The Award will be made at the formal launching of Igbo People’s Civil Rights NGO – “FACT CHECKERS COMMISSION” under IPC that will be launched in April 2014 in Houston Texas.  The principles upon which our country was founded have been eroded and materialistic values have substituted moral standards. If we are to survive as a people, politicians are going to have to make drastic changes in our present way of life. They have to change their behavior patterns, change their thought processes and adjust their moral values. Because in a democracy, the greatest possible amount of responsibility rests upon the shoulders of the individual, the resolution of today’s crisis in Nigeria must begin with each of us. Join the movement and be invited to become the voice that (1) will not, any longer, be drowned out by the counter noises that our leaders make about our progress and prosperity; (2) the voice that will not be muted by angry expressions of disgust and disdain for the electorate; (3) the voices that will not be stilled by indifference, neglect or irrational evasion. Please contact IPC for details. 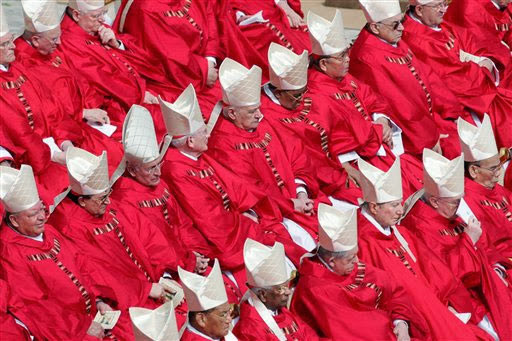 2. Lorenzo Baldisseri, Titular Archbishop of Diocleziana, Secretary General of the Synod of Bishops.

3. Gerhard Ludwig Műller, Archbishop-Bishop emeritus of Regensburg, Prefect of the Congregation for the Doctrine of the Faith.

4. Beniamino Stella, Titular Archbishop of Midila, Prefect of the Congregation for the Clergy.

Posted by PublicInformationProjects at 02:17 No comments: