Special Report: Lest We Forget, The January Uprising Of 2012 And The Anti-Corruption Movement In Nigeria 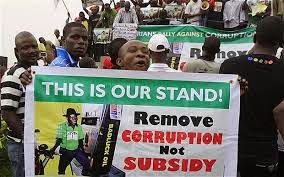 [Being The Text Of A News Conference Jointly Addressed By Protest To Power Movement [P2pm] , Civil Society  Legislative Advocacy Centre[Cislac], And State Of The Union [Sotu] Project;  Friday 9th January 2015]


Introduction And Context:
Three years ago this month, a monumental crisis of historic proportions unraveled and shook our country to its very foundation. At the root of that crisis were corruption, and the impunity in governance that enables, drives, and protects its perpetrators and perpetuators.

This same phenomenon of corruption, grand theft and pillage of public treasury by a few entrusted with the safe keeping of our commonwealth, has alas since then grown and become not only endemic, but also pervasively systemic.

If we recall, January is the month of the anniversary of that historic eruption of popular anger that became known as Occupy Nigeria, the January Uprising.

Today, 9th of January 2015 marks three years since a growing spontaneous protest movement ballooned into a nationwide uprising, the most massive, and significant in our history. For it was on January 9th2012 that the joint Labour and Civil Society Coalition launched a Nationwide general strike and mass protest that went on to involve more than 55 cities and towns across the length and breadth of Nigeria.

What triggered that nationwide crisis was the unprecedented hike in fuel prices announced by the  government as a New Year gift on January 1st 2012.

That hike in fuel price, was prompted by government’s stated desire to end what it called the unsustainable regime of fuel subsidy.

Corruption In The Petroleum Sector And Occupy Nigeria:
That crisis, the January Uprising exposed the corruption at the heart of the fuel subsidy regime, and validated the position of civil society regarding the cause of that burden on the economy.

For the avoidance of doubt, it is important to restate the facts, because those facts are still clearly at play even today.

What the government called fuel subsidy is the difference between the cost of importing refined products, and the pump price of fuel. This difference which is an unnecessary cost exist because our domestic refineries are in a state of dilapidation, like almost every other public basic infrastructure, as a consequence of which we have to depend on imported refined products to meet our domestic need. This situation is further compounded by the fact that the value of the Naira is not stable against the US Dollar, the currency in which crude oil is sold, refining and transportation cost is incurred internationally.

Relatedly this inflation of the daily consumption rate shut up steeply the cost of the subsidy, rising from less than N600bn in 2010 to N2.7trn in 2012 [more than 50% of the country’s annual budget, and nearly three times the size of the annual capital vote], and dropping to just about an average of N1.2trn in subsequent years.

Similarly the number of fuel importers, many of them revealed illegal entities, and a host of which collected subsidy claims for undelivered products, and or were involved in the practice of round tripping and over invoicing, shot up to more than 150 in 2011, and dropped to less than 50 after the January Uprising.
Remarkablyin spite, of this monumental fraud and looting of the treasury that was exposed, no significant action has been taken to identify, prosecute and punish culprits, much less recover looted funds.

Additionally even though it is clear that such a grand scale and scope of treasury looting could not have been undertaken without the collaboration and protection of highly placed political officials as well as highly placed officials of the major public sector actors in the petroleum sector, including the NNPC, DPR, PPPRA, and Federal Ministries of Petroleum and Finance, uptill this time no official has been implicated much less disciplined for these fundamental breaches.

Furthermore, at the height of the January Uprising, and significantly during the negotiations between government side and the labour-civil society side, promises which have turned out to be outlandish had been made regarding not only identifying and punishing the corrupt, but also with respect to acquiring adequate domestic refining capacity within a three year period.

Importantly the Minister of Petroleum Resources had said then that capacity utilization rate of the domestic refineries which she claimed stood at 40% during the crisis would be improved and increased to over 90% by 2nd quarter of 2014.

The Federal Government which had stated that it would take about three years to build new refineries had also signed MOUs and granted licenses to build and complete by end of 2014 four so-called Greenfield Refineries through Public-Private-Partnership.

Three years to the January Uprising however, all the promises made have not been realized, ensuring that the nation continues to be dependent on imported refined products for more than 80% of its requirements; the only OPEC member country to be so dependent.

Outrageously, capacity utilization at the nation’s four domestic refineries is now reported to be at a mere 16.14% average, according to the latest data from the sector. And this is after the expenditure of a tidy sum of N152bn spent on failed Turn Around Maintenances [TAMs] of the refineries as at 2013.

To make matters worse, none of the four Greenfield refineries have been built, much less operationalized. In point of fact not even the land has been cleared at the sites acquired since 2012 for these projects.

It is the gluttonous greed of the ruling political elites, which drives their unprecedented levels of light fingeredness, leading to the routine frenzied pillaging of national wealth, which has placed an implacable obstacle on the part of combatting corruption, making the refineries work, building new refineries, thus achieving sufficient domestic refining capacity and doing away with the subsidy regime.

The impact of the corruption in the oil and gas sector of Nigeria has been further accentuated in recent times by the crash in crude oil prices, and the revelation that we had depleted our savings long before the crash, and are thus right now on the brink of bankruptcy.

The same impunity driven and aided corruption that is at the heart of the subsidy regime, is also at play in the mismanagement of our external savings.

The External Reserves [ER] and the Excess Crude Account [ECA] created and established to cushion the country’s economy against the vicissitudes of the global economy, were ravaged in times of plenty so much so that now in times of need, we have almost nothing to fall back on.

For instance both the ER and ECA which stood at $48bn and $10bn respectively at the end of December 2013 had been drawn down to less than $33bn and $3bn respectively even before the oil price crisis unraveled.

Non Implementation Of The African Convention On Corruption:
What appears perplexing is the fact that the country is witnessing these unprecedented levels of corruption with impunity even though Nigeria is a signatory to the 2003 African Convention on preventing and combating corruption which came into force on August 5th 2006. 34 African countries, including Nigeria have ratified this convention.

The convention focuses on the promotion of accountability and transparency in the management of public affairs, in order to create conditions that will support socio-economic development.
In line with issues addressed in the convention and the provisions thereof, the AU mandated state parties to the convention to implement the following:
• African states will develop legislative measures to criminalize the conversion, transfer and disposal of property that is the proceeds of corruption or related offences or the disguise or concealment of the true nature, source, location, disposition, movement or ownership of or rights with respect to property acquired through proceeds of corruption.
• African governments must develop laws to establish the offence of illicit enrichment.
• African governments will adopt laws to prescribe the use of funds by political parties in a            transparent and accountable manner.
• African states will develop laws, mechanisms and other measures to fight corruption in the private sector including companies paying bribes to win tenders while encouraging the private   sector to assist in the fight against corruption.

On this 3rd anniversary of the January Uprising, triggered as it is by mass anger and popular outrage at the scale and scope of corruption, alas we are where we are at present, largely because our government has not fulfilled its commitment to the African Convention on preventing and combating corruption, which it freely entered into and ratified.

Uptill this moment, necessary policy, legislative and institutional frameworks have either not been put in place, or where they are in place, they have been weakened and incapacitated, making it impossible for these to be effective.

The Importance Of The Upcoming General Elections:
The major culprit here is the absence of political will on the part of political leaders and elites to combat corruption largely because they have either been compromised or have become beneficiaries of corruption.
It is in this light that we call on and urge Nigerian citizens to make good use of the election campaign process and the upcoming general elections to ensure that they hold politicians accountable, and make parties and their candidates commit to actionable strategic plans to implement the African Convention on preventing and combating corruption in Nigeria.

If we are able to achieve this, it would be a befitting legacy to the spirit and courage of the January Uprising of 2012, the 3rd anniversary of which we have gathered here to mark today.

Our Demands:
In view of the forgoing we make the following demands;
1.      That Nigerians should take advantage of the forthcoming elections to make political parties and their candidates enter into binding commitments with citizens on preventing and combating corruption
2.      That this government and the post February election government should immediately develop in a participatory manner a National Action Plan with set targets and penalties for implementing the African Convention on preventing and combating corruption
3
That immediate and measureable steps be undertaken to identify, prosecute and punish all those individuals, officials and companies involved in the various processes of corruption in the petroleum sector, including the failed turn around maintenances of refineries and the fuel subsidy regime
4.
That immediate steps be taken to recover looted funds in the petroleum sector
5.      That as a lasting legacy to our January Uprising of 2012, all active Nigerian citizens should redouble their organising and mobilising efforts to ensure that government and political parties and leaders take seriously the fight against corruption and develop and practice of zero tolerance to corruption in the country
6.
That justice be given to those who lost their lives in the January 2012 fuel subsidy uprising and compensation be given  to their families
7.
That the passage of the petroleum industry bill (PIB) inclusive of civil society concerns and recommendations
8.
That measures to reduce landing and distribution be put in place by improving the efficiency of ports and depots
9.
That the NEITI Audit reports be implemented without further delay
10.
That measures are put in place to stop immediate stoppage oil theft.

Conclusion:
Finally we wish to express our appreciation to Nigerian citizens for the courage demonstrated during the January Uprising, and to our colleagues in the media for their steadfast support for anti-corruption causes.