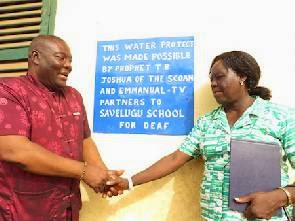 Founder and General Overseer of the Synagogue Church of All Nations (SCOANS) headquartered in Nigeria, Prophet TB Joshua has provided pipe-borne water to the Savelugu School for the Deaf in the Northern Region.

The church's decision was informed by the unwholesome water used by students and staff of the school.

The contractor connected pipelines from the main Savelugu water treatment plant to the school.

The project, which was facilitated by the Prophet's right-hand man, an Accra High Court Judge, His Lordship Justice John-Ajet Nassam cost GHC23, 000, 00.

The project was executed at the request of the school's management in May 2014 when a delegation from the SCOANS led by Justice John-Ajet on behalf of Prophet TB Joshua donated food items, detergents and other valuables to the school.

Commissioning the project on Thursday, His Lordship Justice John-Ajet Nassam exclusively told Citi News it was meant to alleviate the plight of students and staff there.

He said Prophet TB Joshua by the project demonstrated that he was indeed father for all regardless of one's geographical location.


His Lordship Justice John-Ajet Nassam promised that the SCOANS will continue to bless more souls by providing basic amenities to the destitute in society.

He commended the contractor for a quality work done and challenged management of the school to maintain the facility.

The delegation on behalf of Prophet TB Joshua organized Christmas party for the students.

Assistant Headmistress of the school, Madam Amenyoku Akuvi commended Prophet TB Joshua and the SCOANS for the gesture.

She confessed saying, "Getting water to bath and clean our places has been a very big problem for us here but since this intervention has come we get water, we drink, we clean, we are so happy: we have no words to quantify our happiness but all that we have to say is Jehovah who is in heaven has seen the good work he has done for us and will continue to support us."

Since its establishment in 1978, the Savelugu School for the Deaf lacked pipe-borne water.

In a related development, His Lordship Justice John-Ajet Nassam's team organized Christmas party for the Nyohini Children's Home in Tamale.

He gave an undisclosed amount to the mother of the Home for the inmates' upkeep.

His Lordship Justice John-Ajet Nassam took notice of their teething problems and assured them of Prophet TB Joshua's intervention early 2015.

He asked the management of the Orphanage to nurture the inmates to be responsible citizens.

Mother of the Home, Betty Aba Anan on behalf of management thanked the SCOANS for the blessing.

She requested for detergents, diapers, potable water, beds and other valuables.

The team further touched the souls of street beggars around the Tamale Picorna Hotel by providing them lunch.

His Lordship Justice John Ajet-Nassam inspired the beggars to have faith in God that all was not lost in life.