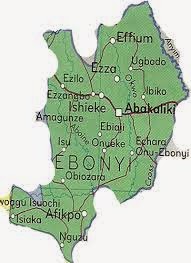 As the clock ticks for the 2015 general elections in Nigeria, there is intense horse trading, campaign of calumnies, character assassination, midnight conspiracies, and even fraud under so many guises going on at an alarming speed presently.


But depending on whichever way the pendulum swings owing to so many factors at play, what is incontestable is that that the choices of the electorates at the various states, senatorial districts, federal and state constituencies will determine the people’s fate in the next four years.

While some will be consigned into painful moments of bad governance characterized by under development, pitiable conditions of living, governance and legislation by helicopters and gallivanting, others may also be lucky to experience quality representation and responsive governance all depending on choices made.

In Ebonyi Central Senatorial District , Ebonyi State where effective and purposeful representation  has remained a mirage since the return of the democratic dispensation in 1999,  the  February 14, 2015 election  is not only a defining moment but presents a golden opportunity to launch the zone into its pride of place in Nigeria.

Ebonyi Central comprises of four local governments namely, Ishielu, Ezza North, Ikwo and Ezza South. In representative democracy, the late Senator Usulor from Ezza South represented the zone in the National Assembly between 1999- 2003. He was replaced with Senator Julius Ucha who was there between 2003- 2007 and till 2011.  The incumbent senator of the zone whose clock is ticking fast is Paulinus Igwe Nwagu.

While those who have represented the zone since 1999 did their best according to their individual inherent capacities, what has become incontestably clear for the people is that the wind of change has come and it is now irresistible.  The people are tired of Gerontocrats and swimming in mediocrity while their best materials are hidden as shining stars in some institutions and establishments where they shine forth and blaze the trail for the larger benefit of their employers and immediate environment.
Among the array of candidates jostling for the senatorial seat of the zone in the 2015 election are Chief Obinna Ogba for the PDP, Dr. Anyigo Vincent for the APC , Elechi Elechi for the LP and Prof. Bernard Odoh for the APGA.

X-raying the antecedents and profiles of the candidates aforementioned, without sounding immodest or derogatory, Professor Bernard Ifeanyi Odoh, the candidate of the All Progressives Grand Alliance come tops with an impressive and intimidating pedigree.

A professor of Geophysics, Odoh at 39 has accomplished what his peers at 50 could not achieve and he remains ever humble and accommodating with no airs and puffed up pride to throw himself about.

A Christian in principle and practice, his meteoric rise to academic height after obtaining his first degree in 1999 and Doctor Of Philosophy in  2008 confounds both his teachers and contemporaries but the most significant of them all is that he has taken a covenant with his creator to be a channel of blessings to others.

His former employers, Nnamdi Azikiwe University, Awka at the management level saw the qualities in him that while his mates were still trying to find their feet as Assistant lecturers, Odoh has gone far in research and study that he was not only elevated to be a member of the University Senate but he headed many strategic positions while garnering grants and awards from several international organizations.

His last appointment as Special Assistant on Academic Matters to the Vice Chancellor, Nnamdi Azikiwe University, Awka   was an eloquent testimony that a golden fish has no hiding place while merit and competence supersedes avuncular and petty considerations.

In the Nigerian people’s mindset, Odoh already placed in a vantage position in the university administration should have stayed in his comfort zone and enjoy the pecks of the office for the service of his immediate family and friends but he decided to step out of the comfort zone for the benefit of his people.
The Ezza League of Professionals have already spotted him not only as an ambassador for the Ezza nation but one who has the mindset, the towering qualification and the commitment to change the fortunes of the people of Ebonyi central.

He is not a money bag and does not come from the mould of the career politicians of our time who are bent on exploiting the ever widening gap between the haves and the have-nots to exploit political power as a means to an end.

Prof. Odoh says in his manifesto that the time is now while he has come with a message of hope and regeneration for his people so that they could realize their full potentialities.

Testimonies abound from the youths, the undergraduates, mothers and the elderly who have been touched by Odoh’s positive impact in several ways ranging from facilitation of employment opportunities, university admissions, scholarships, skill acquisition and other humanitarian/ empowerment programmes .

The people have realized that if he could do all these as a university teacher; imagine what will be his score card for four years as a senator. Levels will change while many destinies will be reshaped and repositioned to be the best as God has fashioned it to be.

Odoh says he is   responding to the compelling call by his compatriots to rise to the challenge of offering leadership for service and is doing this out of conviction and courage. To him, conviction is not perfection but it is borne out of sincerity just as courage is not the absence or denial of fear but the realization of the fact that for the people to move forward, they have to exercise the quality of every virtue acting at its highest testing point.

His candidature has assumed a movement beyond party cleavages and affiliation as many groups and individuals within the Ebonyi central zone have all endorsed him while praying and working for his success at the polls.

February 14, 2015 is therefore a moment in the sands of time where reason will speak above money sentiments, where the voice of the masses will enthrone a new order and a moment where the people will say it loud and clear –Never again!

Steve Jobs talking about moments said: “Everyone here has the sense that right now is one of those moments when we are influencing the future”. Tony Robbins also said: “It is in your moments of decisions that your destiny is shaped while Herb Brooks summarized it all when he said:”Great moments are born from great opportunities”.  People of Ebonyi Central, cease this opportunity at the moment and define your destiny to the Glory of God and for the service of humanity.

(Attah writes from Onitsha Anambra State. He can be reached via: 08035090548, attahcomrade@yahoo.com)
Posted by PublicInformationProjects at 01:24