Article: Falsehood As Transformation, Deception As Change And Lessons From Afar 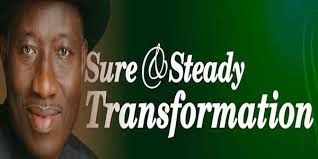 As the 2015 general election rapidly approaches, and the tempo of war drums increasingly gathers momentum, it is pertinent that we once again remind ourselves of certain truths, while we draw inspiration from other climes.


Let us begin by going back to the metaphor of the ‘choiceless choice’ that we as citizens and electorates are unfortunately confronted with in this election. I have said elsewhere that the difficult choice that we face in this election is sadly one between the proverbial devil [in which case one needs the longest spoon in order to dine and remain alive], and the Deep blue sea [in which case one needs to be a record breaking Olympics swimmer in order to stay alive]!

Let me explain further; the main opposition party, the APC, which unlike at any other time in our history has a real chance of defeating the incumbent and ruling party, is today a mirror image of the party that the ruling PDP was a few years back. It is now a fact that a majority of the power blocs [upto 80%] who were once party of the PDP coalition the height of its power are now in the APC. In other words, after the merger of the legacy parties [A C N, CPC & APP] with the New PDP, the APC had become fully transformed in reality into The New PDP. This process of becoming the PDP has been further accentuated by the renewed implosion of the PDP as a result of its fractitious party primaries.

How truly tragicomedic our situation is is demonstrated in the ongoing general election campaigns; Three core examples will suffice. How many of us have seen the campaign adverts of the Sokoto, Rivers and Kwara State PDP chapters of recent? They castigate the incumbent APC governments for haven presided over the ruin and long term devastation of the states. Really? These same APC governments which until less than 2 of the previous 16 years ago were PDP governments? At what point did they begin the ruin and devastation of the respective states? Less than two years ago when they decamped and joined APC?

Equally nauseatingly childish and bereft of rational intelligence are the campaign trail pronouncements of persons like the Director General of the APC Presidential campaign organization in person of incumbent Rivers state governor. So according to these APC leaders, who for 14 of the last 16 years of civil rule were leaders of the PDP, the ruling party is responsible for the grand theft, humongous scale and scope of corruption, as well as crass incompetence in governance that has messed up the once thriving and vibrant economy of our country, thereby leading to the impoverisation of more than 100 million of our people.

Truly? Were they not until less than two years ago leaders of this same party? At what point in time did the party, the PDP undertake the devastation of our economy? At what point in time did it begin to preside over historic levels of corruption? Were these APC leaders not all leaders of the PDP during our January Uprising of 2012? Did that Uprising not expose an unprecedented level of corruption in the fuel subsidy regime alone, amounting to N2.7trn, more than 50% of our annual budget?

So forgive me if I am not enthused by the options placed by history before us. The election campaigns by the two major parties further buttress my point, and increases the level of my anxiety about the future of our country.

What the incumbent ruling party, the PDP has continued to engage in is the promotion of ‘Falsehood as Transformation’. On the other hand the opposition APC has not fared better, as it has continued to promote ‘deception as change’.

For instance the PDP continues to advertise its so-called transformational achievements in power. Among these is the purported transformation of power sector. So the party claims to have increased immensely access to grid electricity in the country. Yet inspite of the more than $28bn investment in the sector over the last 16 years, by official account, power generation has not increased above 4,500MW at any point in time, and the national grid continues to suffer an average of 20 system collapses annually of which at least 16 are total system collapses. If we factor in the fact that power generation capacity as at the time of the 1999 return to democracy was more than 3,500MW, then we are left at a loss as to how the addition of a mere 1,000MW at the cost of 428bn could be bandied as an achievement, much less a transformational one.

Or take a look at the claim by the agriculture ministry that it has created 3 million new jobs. Oh yes? In what way except by a sleight of hand can the registration of 3 million out of the population of existing farmers constitute the creation of new jobs? Or is it the fathom 22,000KM of new roads said to have been constructed. Which roads are these? The Lagos-Ibadan Expressway, the East-West Road, the Abuja-Lokoja expressway? All of which have remained under construction or rehabilitation for decades?

Well, the truth is that we know what the PDP has done, as much as we know what it has not done. But what do we know of the APC? The antecedents of its major promoters, leaders, and candidates give little room for cheer.

What can the APC do in a fundamentally different way from how the PDP has governed? Let me go back to the power sector. Does the APC know how much and how long it will take to increase all three capacities – power generation, power distribution, and power transmission to 10,000 MWs or 15,000MWs apiece? Once in power how does it intend to raise such funds?

In doing this we can and must continue to ceaselessly draw lessons and inspirations from the global class struggle of the exploited and oppressed classes and peoples. Just as our January Uprising drew inspiration from the Arab spring and the global Occupy Movement, so must our radical and uncompromising engagement with the political process draw inspiration and lessons from the fortunes of Radical Left parties across the world. In this regard, we must learn the lesson of the unfolding events in Greece.

The electoral victory of Syriza, the Radical far left Greece party in the January 25th general elections has sent shock waves across Europe and the Americas, causing panic in the economic epicentres of the global capitalist system.

This Greek Victory, though still unfolding represents a historic moment, and if the momentum is sustained across Europe, could become an historic turning point. The election campaign of this radical left party was closely watched across the globe. The dominant parties of the global capitalist system intervened through scare campaign, issuing threats and ultimatums. Kindred radical left parties intervened by supporting and promoting the campaign of the Greek radical left, while also increasing the tempo of their own radical organizing and mobilizing at home.

The tentative result has been that the Greek victory has become an European radical left opening. PODERMOS, the Spanish Radical Far Left party, established barely a year ago has received a surge from the Greek victory, it has become emboldened, and its lead in opinion polls towards upcoming Spanish elections has increased.

If the Greek victory can be followed by a Spanish victory, and a strengthened repositioning of the Radical left parties in France and Germany, then a fundamental fault line would have been opened up across Europe, threatening a foundation shaking tremor for the global capitalist system. It is in this sense that the Greek victory, like the Brazilian victory 16 years ago, may have inaugurated a radical shift to the left politically and economically in Europe similar to the one that has occurred in Latin America in the wake of the victory of the Brazilian Workers Party nearly two decades ago.

In the midst of the existential crisis confronting our nation, one that is engulfing the ruling class and causing it to implode, it is possible to build such a radical left alternative political platform, it is possible for the deepening crisis of ruling misrule to precipitate in no distant future or by 2019 a crisis election, and it will be possible for such a radical alternative to defeat the ruling class parties at such an election.

History imposes a task on us, that of achieving of National Liberation and Social Emancipation. We can achieve this task only if we redouble our efforts at organising and mobilising to Take Back Nigeria.
(Gaskia Is National Coordinator Of Protest To Power Movement [P2pm] And Co-Convener Of Say No Campaign [SNC])