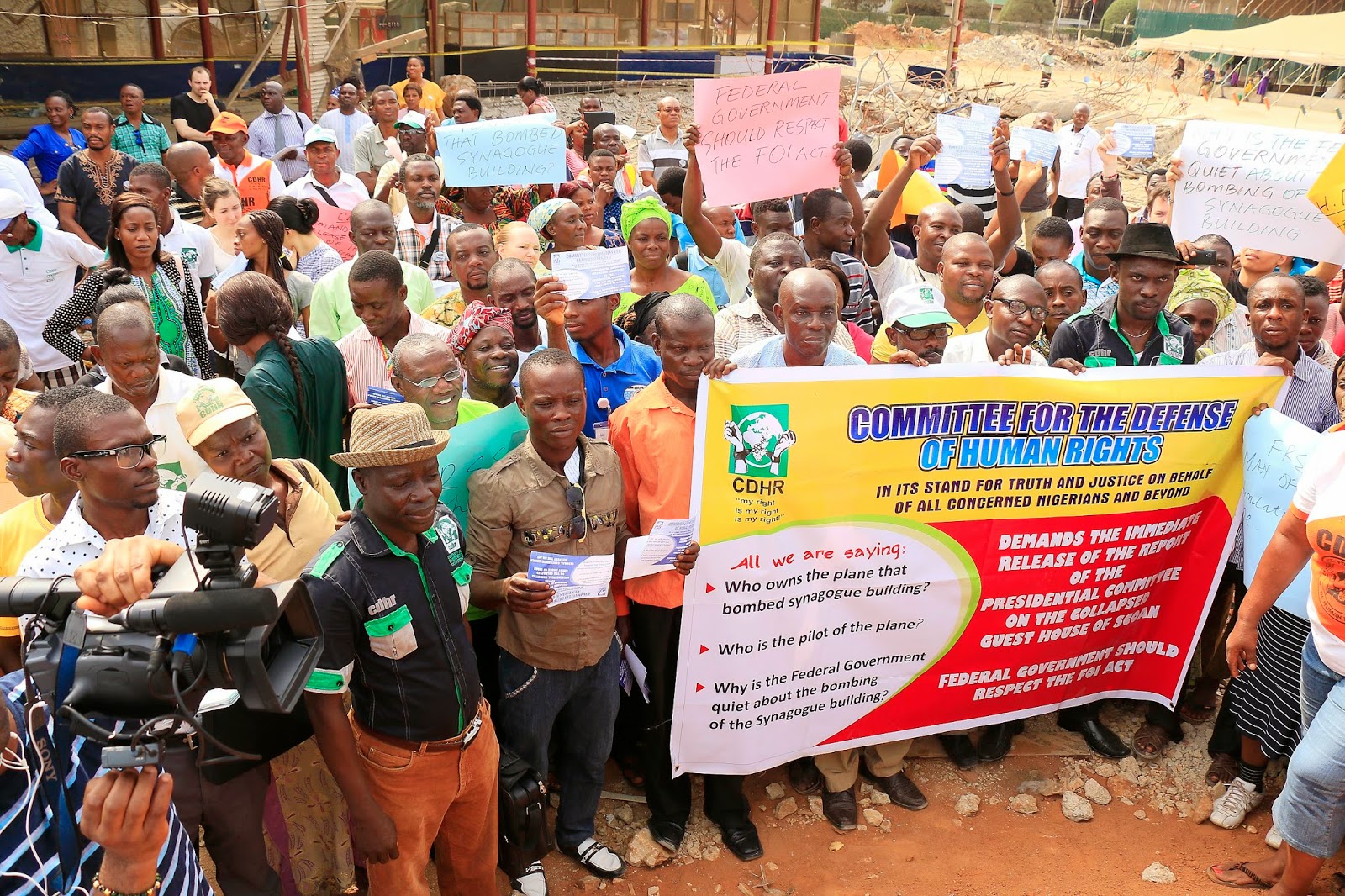 The Committee for the Defence of Human Rights (CDHR) has called on the Federal Government of Nigeria to expedite action on the release of the security report of investigation into the collapsed Synagogue, Church of All Nations building in which over a hundred lives, mostly South Africans, were lost on September 12, 2014.

Speaking to newsmen while inspecting the site of the collapsed building, Comrade Enenuvwedia wondered why the presidential committee set up to look into the circumstances surrounding the incident is yet to release a report. He observed that the essence of the solidarity rally is to ensure that justice is done bearing in mind the international implications of the incident which claimed the lives of foreign nationals.

“Why has it taken the government so long to unravel what happened here,” Enenuvwedia questioned. “Even though I am a layman, I know these foundations are very solid,” he said, standing before the huge foundations of the collapsed building.

“All we are hearing is let the man of God come to court,” he continued. “For what? What is the reason for that? Is it not the building that collapsed? We don’t believe in ethnicity or politicizing issues. We have to attend to issues the way they are. They should allow the man of God to remain where he is and do the work God has assigned to him. Enough of humiliating TB Joshua – CDHR will not stand and see that happen. We will continue to fight for the rights of all Nigerians. We have demanded that the government release this report within two weeks. Let the whole world know the reason for this action.”

The group circulated flyers that questioned many issues pertaining to the collapsed building. For instance, the flyer carried the following questions: who owns the plane that crossed over The Synagogue building several times? Who is the pilot of the plane? Why is the Federal Government quiet about what happened?

The Chairman of the Ogun State chapter, Comrade Folarin Olayinka bemoaned the lack of respect Nigeria had shown for the sanctity of human life. “When you see what has happened here, it is quite unfortunate that Nigeria has become a country where everything is politicized,” he said. “The lives of human beings are no longer valuable to the leadership of our country.”
“We have come to demand justice and agitate against the denial and delayed justice,” he defiantly continued. “We are all aware of what happened at the church here. They said that they have constituted a panel to come up with a report to determine what happened but since then, no report has come out. The Federal Government should come out with the report of the evil that has befallen the church. They should come out to reveal the perpetrators. We don’t want it to be swept under the carpet. It is the cry of the people that has necessitated our coming here today. Anyone that has caused sorrow, we believe that they will not go unpunished,” he concluded.
Speaking on behalf of the church, one of the foreign evangelists showed the human rights group the strength of the foundations, observing that the collapse was a controlled demolition that was planned and executed. He also said that the incident had not stopped foreigners from visiting the church in search of spiritual rejuvenation.

Meanwhile, a delegation of visiting Russians who spoke to newsmen said people from their nation would continue to visit Nigeria because of the great works God is doing through Prophet T.B. Joshua. Spokesman of the delegation, Mr. Ramin Teyyubov who led other members of the delegation to the site of the collapsed building said Nigerians should appreciate their own.
“Russian people and countries from the former Soviet Union love T.B. Joshua, respect this ministry and know what God is doing through him,” Teyyubov stated. “We are joining the Committee for the Defence Of Human Rights and we agree with the questions they are asking. People are asking from our country why this issue has not been resolved yet.”

“All of us live under one God and He sees everything,” the Russian counseled. “I was sitting at home and wondering who the pilot was, who planned this and why the government is still keeping silent. They know what is happening. We know Prophet T.B. Joshua, his integrity and how he walks with God. These are very important questions that need answers!”

Representatives of CDHR were then shown the 11 ambulances belonging to The SCOAN that were used during the rescue operation. The human rights group insisted that they were moving to Abuja next to continue their protest until the government released the security report.
The inquest into the cause of the collapse of the building is set to resume on Tuesday 10th February 2015.
Posted by PublicInformationProjects at 00:51