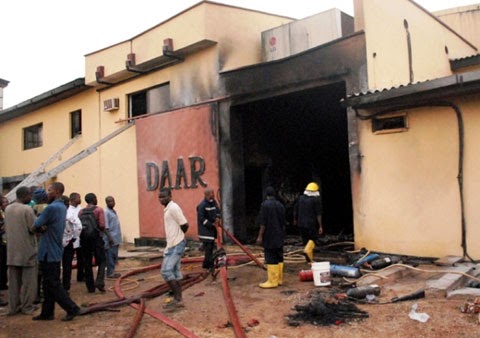 The leadership of International Society for Civil Liberties & the Rule of Law condemns unreservedly the reported fire outbreak at the Radio section of the African Independent Television (AIT) in Lagos State, which was reported on Monday, 9th March 2015. Just weeks ago this year (2015), luxury buses worth hundreds of millions of naira belonging to CHISCO Transport Company Limited were set on fire in Lagos State.


The immediate and remote causes of the two infernos are strongly believed to be politically motivated. In the case of inferno at the CHISCO Bus Station, it was reportedly linked to political thugs belonging to the one of the Nigeria’s registered political parties called APC.  The report has it that the Bus Station was indirectly attacked and destructively affected. The report further disclosed that the thugs on their party’s campaign rally sighted a Federal Office block with campaign banners of President Goodluck Jonathan and pelted the said Federal building with inflammable substances, which ignited and spread to the next property being the CHISCO Bus Station leading to fire outbreak that burnt the buses irreparably.  Till date, we are not aware of any investigative and prosecutorial step taken by the country’s security agencies against remote and immediate culprits. There is also ITV Benin Station that was gutted by fire recently with accusing fingers directed against the referenced party.

In the case of the AIT Radio premises, the inferno deeply looks politically and ill conceived. This is because there has been a deep rift between a former top public office holder in Lagos State and the management of AIT over the latter’s airing of a documentary alleging ownership and acquisition of properties worth billions of naira illicitly by the former. This resulted to the former threatening the latter with a lawsuit and the former making real his threats by slamming a civil and libelous lawsuit against the latter claiming billions of naira as damages among others. The latter also replied the former maintaining its stance with a counter threat of lawsuit. Days later, the referenced party’s Lagos State Branch openly attacked the AIT and called for mass boycott of its media programs for running damaging documentary against itsleader. There have also been sponsored columns in the print media, believed to have come from the referenced party, impugning and castigating the AIT and its management.

Sadly, the rights CSOs in the area have gone dumb over the two despicable and unwarranted attacks; thereby justifying our steady position that they have been heavily compromised. We see the coordinated attacks against the AIT and its management including the referenced fire outbreak as persecution and gross infraction of the Fundamental Human Rights provisions in the Constitution of Nigeria 1999 with its last amendment as well as the African Charter on Human & Peoples Rights of 1981; particularly as they concern press freedom and freedom of expression.

By Section 22 of the referenced Constitution, the AIT as a mass media is empowered to uphold at all times theFundamental Objectives & Directive Principles of the State Policy contained in the Chapter Two of the Constitution. The sighted provisions are called the dos and don’ts of the elected and appointed top public office holders in Nigeria. The AIT also draws current from Sections 36 (fair hearing) and 39 (freedom of expression) in the performance of its constitutional and civil duties.

On the other hand, the same Chapter Four of the Constitution including its Section 46 empowers any present or former elected or appointed top public office holder who feels gravely harmed civilly by the constitutional activities of the referenced mass media to seek redress in court. At no time does the Constitution encourage resort to self help or Yorean method of justice.  The inferno at the AIT Radio may not have been engineered directly, but it certainly cannot escape the handiworks of moles and insider conformists hired and brainwashed for vested political interests or reasons by some political brigands.

We call on Nigerian politicians and political parties to eschew politics of bitterness and intolerance. We wish to put the World Press Council and the international community on notice and alert over the foregoing. It may most likely be safe to assert that the AIT, its staff and management are in the imminent danger of persecution, threats and other politically motivated unsafe conditions. By extension, the Freedom of Press is under threat in Nigeria.

The Presidency and security agencies in Nigeria are called upon to thoroughly investigate the two infernos under reference, apprehend the culprits and their sponsors and make them pay in accordance with the country’s criminal law. Maximum security and surveillance should be put in place in and around the AIT and other properties of specific social, economic and political interests in Lagos till the polls of 2015 come and go.