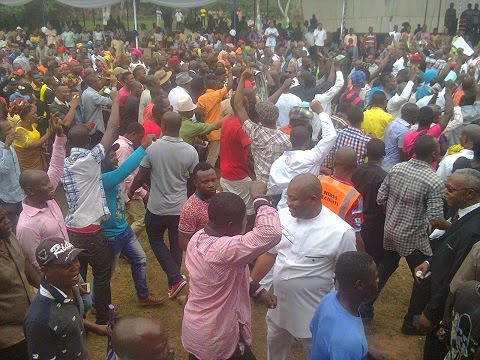 
Hardly had the stage for the event which was at the Assumpta Cathedral Owerri set when many people started running away from the place.

Trouble started when some women suspected to be supporters of the Peoples Democratic Party (PDP) candidate started chanting sarcastic songs and derogatory remarks against Governor Rochas Okorocha of the All Progressives Congress (APC). This angered the governor’s group made up of government officials and APC supporters who reacted violently.

An attempt by the priests and other organisers of the event to calm the situation saw the Okorocha group surging to the podium. At the podium, the group led by the Secretary of the State Government Prof. Anthony Anwuka, the Chief of Staff Imo Government House Chief Jude Ejiogu, the Governor’s son in-law Mr. Uche Nwosu and other top government officials took away the micro phone from one of the priests there and chased away the priests and other organisers of the event out of the podium. The group also scattered the decorated dais and destroyed the public address and other facilities at place.

One of the Okorocha men who spoke to press men said that they did not want the event to hold because they had not been comfortable with the recent statements of the chief organiser of the show Archbishop Anthony Obinna which he said showed that the cleric was against the governor.

Speaking to the people at the place, the All Progressives Grand Alliance governorship candidate in the state Capt Emmanuel Ihenacho condemned the act saying that it was a sacrilege and a show of desperation. He however pleaded with the PDP and APC supporters to avoid any act capable of hitting the polity in the state.

Seen outside the premises of the church were most of the students from state owned secondary schools in Owerri who were mobilized to the place to cheer the governor. They were also chanting solidarity songs in praise of the governor.

Many people have started vacating the place as at the time of filing this report.

The fracas later caught up with Capt. Ihenacho when one of his security vehicles accompanying the ex minister to his Owerri residence was attacked by some youths at the order of the governor’s Chief of Staff Chief Ejiogu around Whare-House Roundabout Owerri.

The enraged youths suspected to be APC supporters subsequently destroyed a campaign bill board being conveyed by the Toyota Hilux security vehicle in the convoy of the former minister, pulled out and thoroughly manhandled the driver and an APGA supporter in the vehicle Mr. Osita Megwa. Mr. Megwa was later rescued by some good Samaritans who took him to the hospital for treatment.
Posted by PublicInformationProjects at 03:51