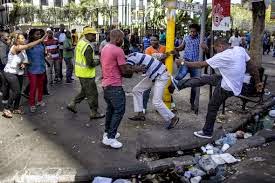 The Campaign for Democracy (CD) condemns the wave of anti-immigrant violence that has swept South Africa in recent days, leaving several dead, many wounded and property destroyed with authorities scrambling  to detain those responsible and prevent further bloodshed.


The cause of this surge in violence is not very clear with some blaming alleged inflammatory comments about foreign nationals from the Zulu king, others saying a labor dispute between locals and foreigners back in March turned nasty.

Unemployment in impoverished areas has also been identified as a contributory factor.
The violence has caused thousands of immigrants to seek refuge at police stations and shelters.

There is widespread feeling that the South African government has been far too slow to respond to the violence, which has erupted intermittently in various cities over the past few years.

The xenophobic attack has also been seen as fallout of failure of the government to empower the people with wider access to education so that they will qualify for the jobs that they say they deserve but are being taken by foreigners.


We are miffed however that these South Africans would decide to visit harms on fellow Africans and in the process violate good brotherliness that is cherished amongst people of African descent.

We are particularly disturbed by the attacks against Nigerians given the enormous sacrifices Nigeria made in the ant-apartheid struggle in South Africa. Apart from monetary and other unquantifiable support to the black Africans under the yoke of apartheid, Nigeria became a comfortable abode for ANC cadres fleeing from the plague of repression. Among such South Africans who found home in Nigeria was the former President Thabo Mbeki.
No one would have imagined that it would not take more than two decades after freedom for these people to turn weapons against Nigerians in spite of all our country did to fight apartheid. Our hearts go to all the families that have suffered losses in these senseless attacks.

We call on Nigerians to as a mark of solidarity with these victims boycott all South African companies and their products in Nigeria until the Zuma government is able to guarantee the safety of our citizens and bring the perpetrators of these dastardly acts to book.