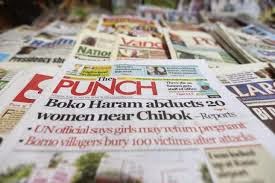 By Section 22 of the Constitution of Nigeria 1999, with its last amendment in 2011; the press, radio, television and other agencies of the mass media shall at all times be free to uphold the fundamental objectives contained in this Chapter (Two) and uphold the responsibility and accountability of the Government to the People. By Section 39 (1) of the same Constitution, every person shall be entitled to the freedom of expression including freedom to hold opinions and to receive and impart ideas and information without interference. By subsection 2, without prejudice to the generality of subsection 1 of this section, every person shall be entitled to own, establish and operate any medium for the dissemination of information, ideas and opinions. The Freedom of Information Act of the Federation of Nigeria 2011 is also derived from the two sections above particularly the latter.


The summation of the foregoing is that the media has constitutional responsibility to hold accountable at all times all authorities and persons in Nigeria as it concerns honoring sacred obligations imposed on all authorities and persons by the social contract. In doing this, the media is barred from reporting and upholding falsehood and propaganda. In order not to do this, the media is foundationally armed with investigative and analytical journalism. Corporate integrity of the media is at stake the moment it dwells into and institutionalizes falsehood and propaganda. The constitutional rights above do not in any way empower the media to report falsehood and propaganda with intent to mislead the general public and their government as well as to afflict Nigeria with social divisions and confusions.

One of the failures inherent in the 2015 General Elections in Nigeria is media falsehood and propaganda as well as sectional reporting and coloration of social, economic and political issues along ethno-religious lines. The media in Nigeria no longer enjoys a national outlook. It is now a weapon for the promotion of sectional politics and propaganda. Of the whole segments of the media in Nigeria, the print segment is the most decayed. Ethics of the media profession have departed most of the print media houses in the country.

The kind of falsehood; likewise propaganda making the newspaper headlines in Nigeria in recent times is shocking and alarming. For the purpose of promoting sectional politics and divisions, some newspapers in Nigeria have thrown decorum and integrity into the wind. The recent bold headline in the Punch Newspaper: “Jonathan Probes N2 trillion PDP Campaign Funds” still shocks Nigerians and the international community. Though the Presidency has rubbished the falsified news story and its publishers, but it is still shocking as how the publishers of the story came about that highly fabricated figure. Our questions are: How much is the federal government budget of 2015? How much of the budget is for capital expenditures? And how much is for recurrent expenditures? If the capital expenditures of the budget take less than N1.5 trillion, then where do N2 trillion cash campaign funds come from? Can monies meant for wage bills and overheads be melted into N2 trillion liquid cash for poll campaign funds?

As if that was not enough, another recent Newspaper headline alleged: “$20 billion missing oil money found in a Zenith Bank Account”. Again, we ask: can a whopping sum of $20 billion or N4 trillion be validly lodged into a single account of a commercial bank? What are the total assets of the Zenith Bank PLC? Is it possible for an individual to have stolen $20 billion and lodged it in a single Zenith Bank account?

Further, another misleading and highly fabricated news story alleged recently as follows: “N30 trillion oil money missing under President Goodluck Jonathan-Soludo”. We dare ask again:  How much were accrued to the Federation Account from oil since 2011 under President Goodluck Jonathan? Is the Federation Account not different from the Account of the Federal Government? How much was the share of the federal government from the total oil earnings since 2011? How much did the 36 States and the FCT get? What about the 774 Local Government Areas, special agencies and the oil producing States? How much did each of them receive? How much did Nigeria as a whole derive from oil production since 2011 and how much went to the oil production companies and other technical partners?

The truth is that the news items under reference are not factually grounded and real in any bit. For instance, according to factually indisputable report of the Vanguard Newspaper of 13th January 2013, of the sum of N80 trillion shared from the Federation Account and spent by the three tiers of Federal, State and Local Governments between 2005 and 2013, a period of eight to nine years, the Federal Government got N30, 121 trillion with over 60% of it spent on recurrent expenditures. This gives annual average of N3.6 trillion. So even if it is correct to say that the Federal Government under President Goodluck Jonathan has spent N4 trillion in the past five years from its own share of the Federation Account since 2011, the total figure is still N20 trillion. So, where did the N30 trillion missing oil money under President Goodluck Jonathan come from?

In summation, it saddens our heart to note that media falsehood and propaganda are on rampage in Nigeria and  the age-long integrity with which the likes of Punch Newspaper is known for particularly during the inglorious epoch of the military is seriously under threat. The consequences of the media in Nigeria resting on falsehood and propaganda are very disastrous for the country’s democracy and international image. The stakeholders in the country’s media industry must act fast before it is too late. The wide readership and followership enjoyed by the media particularly the print will also extinct unless the bad trend is reversed very urgently.