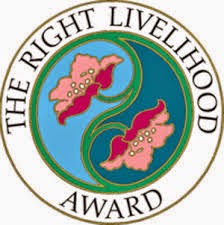 With 'Food Safety' being the theme of this year’s World Health Day on April 7, 37 laureates of the Right Livelihood Award from across the world have endorsed a declaration on the future of nutrition, denouncing Golden Rice and Genetically Modified Bananas as 'false miracles' to achieving food security. Golden Rice is a genetically engineered rice variety offered by GM proponents as a cure for Vitamin A Deficiency (VAD), while GM bananas are proposed to compensate for a lack of Vitamin A and iron.


The declaration, written by 1993 Right Livelihoood Award recipient Vandana Shiva and a coalition of women’s groups in India, comes as controversy escalates over the development of GM crops in Africa. According to a February 2015 report by Friends of the Earth International  only four African countries, South Africa, Egypt, Burkina Faso and Sudan, have released GM crops commercially, while others are involved in testing or have placed bans and restrictions on GM crops and commodities. A GM banana project in Uganda under the National Agricultural Research Institute and supported by the Bill and Melinda Gates Foundation recently provoked fierce resistance from local civil society organizations who claim that there are better alternatives to GM.

Food sovereignty organization GRAIN, recipient of the 2011 Right Livelihood Award and signatory to the declaration, said in an earlier statement, “Vitamin A deficiency (VAD) – like other problems on malnutrition and hunger – is not caused by the lack of Vitamin A in food, but by people’s inability to access a balanced diet…it is a mistake to turn blindly to Golden Rice, a crop that the International Rice Research Institute itself admits it has not yet determined can actually improve Vitamin A...It is clear that the development of Golden Rice, with its avowedly humanitarian mission to solve Vitamin A deficiency serves the biotech industry in its efforts to win wider approval for GM foods. It is a tool to promote GMOs that would pave the way towards control of food and agriculture by agrobiotech corporations."

Nigerian environmentalist Nnimmo Bassey and recipient of the 2010 Right Livelihood Award, said the move toward GM crops on the continent is driven by profit and heralds a new form of colonization. “The modern biotech industry is really going bananas. The so-called golden rice has always been known to be a hoax. The same goes for the so-called golden bananas. The future of African nutrition and access to the right food lies in the preservation of our biodiversity and genetic resources,” he said.

The declaration states that Golden Rice has not in fact proven to be more nutritious than indigenous varieties and that natural food sources like turmeric provide much more iron than GM bananas.

“As a source of nutrition for the Global South, Golden Rice has no real benefits. But considering the precedents set by soya, corn, canola and cotton, introducing Golden Rice as a way for large companies to gain control over entire food cultures based on rice, makes perfect sense,” states the declaration. It also reveals the environmental costs, potentially damaging health impacts and consequences for small-scale farmers of GM crop production, and calls for support for sustainable agro-ecology systems with crop diversity and seed sovereignty.

For background, please see:
"Who Benefits from GM Crops?" Friends of the Earth International, February 2015
http://www.foei.org/wp-content/uploads/2015/02/Who-benefits-report-2015.pdf