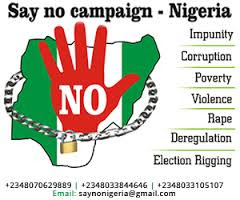 The Say No CampaignNigeria (SNC) congratulates the President Muhammadu Buhari and the Vice President Professor Yemi Osinbajo on the successful transition and assumption of office. We congratulate the Nigerian people for their determination, resilience and patriotism for ensuring a hitch free democratic transition. By virtue of our decision to defend democracy, we have earned international respect and recognition as a democratic model for another developing democracies around the world.


Say No Campaign-Nigeria notes that corruption and impunity are the bane of Nigeria’s governance and developmental challenges. Therefore, institutional accountability, openness and transparency in governance must be guaranteed by the new administration. This will restore confidence and hope in the fight against Corruption and Impunity.

SNC call on President MuhammaduBuhari and Vice PresidentYemiOsinbajo to publicly declare their assets in fulfillment of their moral obligation to the Nigerian people. SNC is convinced that a public declaration will not only set a precedent but will give impetus to the fight against corruption and impunity which is one of the priority issues on the President’s to-do list for the reconstruction of a new and prosperous Nigeria.

SNC is aware that the Code of Conduct Bureau has initiated the drafting of the Access to Public Officers Asset Declaration Bill, 2015 for consideration and passage by the National Assembly. We urge the 8th National Assembly to consider speedy passage of the bill, as it will facilitate citizens’ access to asset declarations of public officers.

SNCcall on the CCB to develop a culture of responding to requisitions forwarded to her pursuant to the Freedom of Information Act, 2010. SNC reminds the Code of ConductBureau that she is a statutory body and a creation of law; therefore she must comply with the provisions of the law.

Finally, SNC expresses its desire and commitment to support President Buhari’s in fulfilling his promise to work with National Assembly for the quick passage of a Whistle blowers Act.

______________
The SAY NO CAMPAIGN is a platform of Nigerians committed to fighting corruption, impunity, poverty, violence and other governance challenges in Nigeria. However, SNC builds the focus of its campaign around the twin issues of corruption and impunity, especially as manifest in public institutions. The Campaign aims to mobilize Nigerians from all sections of the country and sectors of the economy to embrace people-driven and non-violent forms of campaigns and protests against the growing level of impunity and bad governance in the country.