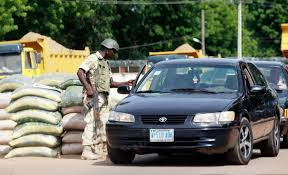 (The new Military check point along Onitsha –Enugu expressway close to Govt. house is a disaster waiting to happen)


The Civil Liberties Organisation (CLO) Anambra State Branch is appalled over the recent mounting of a military check point along the Onitsha –Enugu expressway at Agu Awka near the Anambra State government house.

Against all sense of decency and rationality, road users woke up recently to see a newly mounted check point in the sloppy section of the Onitsha Enugu expressway at Agu Awka, on descending the Aroma Junction hilly section of the expressway.

Though the drums and materials used in mounting the road blocks were clearly painted in military colors and with bold inscription of the military, the first surprise that road users encounter is the fact that men of National Task Force (NATFORCE) are the people manning the check point presently.

They harass road users and vehicle owners and subject people to unnecessary delays in the name of searching for smuggled goods and other god-knows –what.

But the main issue that demands immediate action of the authorities concerned is the fact that whether the check point was meant to be manned by soldiers or other quasi security/ paramilitary outfits, the very location of the check point is a disaster waiting to happen.

Erecting roadblocks at a sloppy area of the expressway coupled with the fact that the road in question has been under construction for an uncountable number of years leading to commuters plying one way routes in most cases has made the spot a flashpoint for frequent road accidents.

At intervals of hours, the Awka axis of the Onitsha –Enugu expressway starting from Amawbia junction to the Ugwuoba boundary after the Nnamdi Azikiwe University permanent site has been a hotspot for terrible road carnages.

The sloppy nature of the area coupled with the pressure created by the one single lane routes and the obvious over speeding of road users within the area have all been the magnet which has attracted several road crashes leading to serious injuries, vehicle damages and numerous deaths.

The recent case of a container laden lorry that crushed to death a family in a private car, the petrol laden tanker that crashed leading to deaths and massive destruction and another crash involving a jeep and a heavy duty truck are samples of the losses and bloodshed which have been recorded therein.

Even now, carcass/skeletons of crashed vehicles, burnt trees and other wreckages of road crash are still the accompanying features of the Agu-Awka Esther Obiakor Estate junction of the Onitsha –Enugu portion of the expressway.

While we are yet to recover from the effects of such unfortunate and avoidable crashes, the mounting of a fresh military checkpoint within the area is therefore unacceptable and a provocation on the psyche of Anambra people and other road users.

Also, more condemnable is the open display of corrupt practices at the Amansea border military checkpoint of the Awka-Enugu old road. Soldiers on checkpoint in this place ‘employed’ an able bodied civilian who collects money from vehicle drivers on their behalf while they pretend as if they are not aware of such act.

This open corruption which is also replicated at the Oji river section of the old road and other military checkpoints at Okpatu, Ozalla/Ohebedim along the Enugu-9th mile –Obollo Afor-Makurdi Expressway is a blight and serious indictment on the image of the army.

The use of able bodied civilians who might be unemployed as a ‘toll’ collectors for the soldiers in their checkpoints is a misnomer, degrading and a mockery of the touted anti corruption stance of our former military head of state and now president, Muhammed Buhari.

This glaring act of corruption cannot continue unknown to the army authorities and should discontinue forthwith.

We call for the immediate dismantling of the new military check point along the Agu Awka Onitsha –Enugu Expressway.  The army authorities should put up effective anti corruption team that will check the excesses of their soldiers in their various checkpoints.

The federal government of Nigeria should also declare a state of emergency on the Onitsha Enugu expressway. The road can be aptly described as the “most delayed road contract in Nigeria” and the only way to ameliorate the incessant carnages on the road is to fast track its reconstruction and dualization.