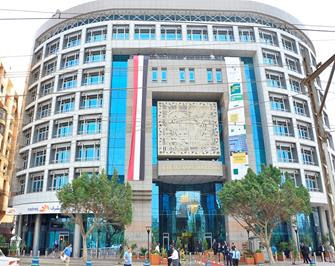 The Egyptian Foreign Minister, Sameh Shoukry, yesterday in Cairo inaugurated the Headquarters Building of the African Export-Import Bank (Afreximbank) with a reemphasis of the need for African countries to strengthen trade and economic links amongst them.


Mr. Shoukry, who was represented by Mohamed Edrees, Assistant Foreign Minister for African Affairs, said that Egypt was focusing more on building increased economic ties with other African countries in order to promote the growth on the continent.

He reiterated Egypt’s support for Afreximbank and said that the Government would work to address the challenges the Bank had encountered in its Headquarters operations in the country.

Earlier, Afreximbank President Jean-Louis Ekra, thanked Egypt for “the instrumental role they played in the birth of Afreximbank, first as a founding shareholder and later as the host nation for the Bank’s Headquarters”.

“I would like to particularly thank the Egyptian authorities for the prime land they provided to host the Bank’s Headquarters Building and for the exceptional assistance they provided in the formative years of the Bank,” continued Mr. Ekra.

Also speaking, Dr. Denny Kalyalya, Governor of the Bank of Zambia and Chairman of the General Meeting of Shareholders of Afreximbank, said that the support of the Egyptian Government to Afreximbank and the partnership between the two parties had worked well as reflected in the bottom line and profitability ratios of the Bank.

He urged the Egyptian authorities to take advantage of the inauguration of the Headquarters Building to renew their commitment and support in order to keep the Bank in a long-run growth path, saying that sustaining the growth of the Bank in the coming years and decades would be critical for its continued relevance, both in terms of development impact and shareholders satisfaction.

Activities marking the inauguration of the Headquarters building included in a panel discussion by Dr. Babacar Ndiaye, former President of the African Development Bank, and Christopher Edordu, pioneer President of Afreximbank, on the theme “The implications of building a global multilateral Exim bank”. It covered the events leading up to the creation of Afreximbank and looked at the progress that it had made.

Afreximbank also mounted an exhibition of its products and services, including archive photographs, historical documents, publications and art works.

The foundation stone for the $14-million Afreximbank Headquarters Building was laid on 18 December 2003 and construction completed in May 2007. Afreximbank began use of the building on 10 November 2010. The building is a 12-floor complex, including 10 over-the-ground floors and two underground floors, and boasts a number of meeting rooms, a board room, an auditorium, a staff cafeteria, conference facilities, a state-of-the-art library and knowledge management centre, and extensive underground parking space, storage and service facilities.

The inauguration ceremony was witnessed by more than 500 high level representatives from across Africa, including ministers, central bank governors, Afreximbank Board members and shareholders, political leaders, captains of industry, business leaders, trade experts and academics.