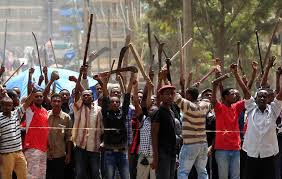 By Criminological account, Insurgency is an attempt by organized recalcitrant or radical elements to unseat a legally constituted government or force it to change its existing socio-legal system for the purpose of foisting its radical ideological belief on the polity. This they do through subversion, terrorism, sabotage and espionage all cloak in sophisticated and asymmetric violent methodologies. Insurgency is also a form of military conflict characterized by small lightly armed bands (cells) practicing guerrilla warfare usually from rural or remote areas for the purpose of forcing the existing government to yield to their usually radical demands or be ousted in order to effect violent reversion of the society to their needs, values and interests. Insurgents, on their part, are citizens of a country attempting by illegal and radical means to change the way a country is governed because the existing socio- legal methods cannot satisfy their demands. Their interests, needs and values could be political, economic and ethno-religious belief or values.


By Peace & Conflict Studies account, Peace is composed of Negative and Positive Peace. Negative Peace, which is reactive, is the absence of direct violence that causes physical harm and Positive Peace, which is proactive, is absence of structural violence manifested in uneven distribution of power and resources. Resources also include tangible and intangible elements (i.e. balanced ethnic and religious values and their protections).  Absence of personal and structural violence leads to a combination of Negative and Positive Peace called Just Peace. All the three forms of Peace have eluded Nigeria in recent times and many; if not most of the present policies of President Muhammadu Buhari are pure triggers of intractable violence including oil and religiously ideological insurgencies threatening or gripping Nigeria.

As there are remote and immediate causes of insurgency including Boko Haram and Fulani Islamist insurgencies, there are also remote and immediate ways of addressing or nipping them in the bud. As there are Boko Haram terror insurgency measures to make its violence unending or intractable in the country, there are also internationally recognized measures to counter their violent activities without a breathing space. It is an incontrovertible fact that Nigerian security or armed forces do not know other military war strategies except concept of inter-State warfare strategy; which is now archaic and anachronistic. Concepts of guerrilla, terrorism and insurgency warfare are totally unknown to the Nigerian armed forces of present time.

We have said it severally and are saying it again that modern counter guerrilla, terrorism and insurgency measures or strategies are coordinated through the two pillars of mental and machine intelligence, powered by mental and electronic intelligence policing or securitization. These methods are also grounded in the Geneva Conventions or Laws of War and are cheaper to apply. Importantly, they are human rights friendly. To constantly pursue a bomb detonator with AK-47 riffle or a machete is the height of policing or securitization mediocrity and daftness. The shocking part of it all is that Nigeria’s two intelligence agencies-DSS (for internal intelligence) and NIA (for counter or foreign intelligence) have gone moribund. The DSS, for instance, is only superb, in haunting and harassing opposition political figures, but has failed woefully in managing the country’s internal security intelligence, to the extent that insurgency bombings and violence have escalated and worsened intractably.

In modern military science and technology including warfare, it is a taboo to pursue bomb detonators with machetes. But in Nigeria, it is a standard practice, whereby Boko Haram bomb detonators are pursued by Nigerian security forces with machetes. Another institution that has decayed unpardonably is the Nigeria Police Force, composed of over 370, 000 officers. In its internal security roles, citizens who are in conflict with the law or those with same potentials are respected, protected and role-modeled in police subculture, whereas those obeying the law are maltreated, harassed and disrespected. It is a truism that Nigeria police officers are everywhere with their AK-47 riffles, yet there is insecurity here and there. Most of the NPF public policy pronouncements including various hash and anti rights policies are targeted against the law abiding citizens.

We have severally called for disorientation of the officers of the Nigeria Police Force from AK-47 or gun culture based policing to mental and ICT based policing, yet such calls have gone unheeded. It is an incontestable fact that a pre-ICT based Police Force can never match or tame insurgency bombings or violence powered by laboratory physicists and ICT technicians. Till date, it is suicidal to rely on or quote the Nigeria Police Force as a credible source for the country’s crime statistics resources including UCR (uniformed crime reports). This is because the NPF crime and meta-crime data base is not only unscientific but also typewriter and manually oriented.  As we write, most officers in the NPF, till date, know nothing about computer software and hardware processes or fundamental computer application usage.

1,700 Terror Killings Under Buhari: We are shocked and alarmed that at least 1,700 citizens mostly non actors or civilians  have been killed since Retired Gen Muhammadu Buhari took over on 29th May 2015 as Nigeria’s President; that is to say that the referenced  butcheries were recorded in the past 127 days of Buhari’s Presidency. The killings were carried out by the duo of Boko Haram and Fulani Islamist insurgencies, with the former accounting for at least 1,300 deaths between 29th May and 7th October 2015. The figure above was built on our previous checks or investigation as well as other reports from credible sources. We had on 16th July 2015 issued a statement and reported that over 1000 citizens were killed in 48 days of the Buhari’s Presidency by Boko Haram and Islamist Fulani terror groups. The figure included at least 625 Boko Haram killings and 380 killings carried out by the Fulani Islamist terror group; erroneously called Fulani Herdsmen.

In early hours of today (7/10/2015), the News Express Online, quoting the acting director of Nigerian Army Public Relations, Col Sani Kukasheka Usman, reported that 107 people comprising 100 Boko Haram fighters and seven soldiers of the Nigerian Army were killed during the attempted attack by Boko Haram insurgents at the 120 Task Force Battalion of the Nigerian Army in Goniri area of Yobe State. The claim is yet to be independently verified. Just few hours ago today (07/10/2015), another bomb blast was reported to have hit the Buhari Housing Estate in Damaturu, Yobe State. The Nigerian News Express, quoting the Channels Television reported that 16 citizens were killed in the explosion.

The above tabulation brings to 1,144 deaths recorded by the Intersociety checks built on various credible reports from local and international sources including ALJAZEERA, CNN, BBC, Guardian, Vanguard, the News Express, Allnews & Reports, Elombah, Trent, Chidiopara Reports, Global ReportersVienna, Republic Reports, Odogwu Reports, Nigerian Masterweb Reports, the Nigerian Voice,  Odera Reports, etc. In other series of bombing and terror killings associated with the Boko Haram insurgency since 16th July 2015, which is not captured above, at least 180 deaths were believed to have occurred; bringing  the total number of Boko Haram terror killings under Buhari’s Presidency to 1,324 deaths . When added to 380 deaths associated with Fulani Islamist insurgency violence since May 2015, the total death tolls recorded in the hands of the two terror groups since the inception of the Buhari’s Presidency amount to at least 1,700. The figure excludes death tolls arising from Islamist Fulani terror activities since 16th July 2015 (our last update).

According to Amnesty International Report of 30th September 2015, “at least 1,600 civilians were killed by Boko Haram since the start of June 2015  in Nigeria, Chad, Niger and Cameroon and 3,500 people have been killed since 2015”. The AI Report is yet to capture killings recorded in the rest of June, July, August, September and early October 2015. Beyond the foregoing, over 17,000 people have also been killed by Boko Haram terror insurgents since 2009 and over 2.5million people displaced with over 80% of them as IDPs or Internally Displaced Persons.

The way and manner with which human lives are wasted and properties wantonly destroyed in Nigeria is chilling, shocking and deafening. To the extent that Boko Haram terror elements can bomb at will and at any place or nook and cranny of their choice is a national tragedy. Where then lies Retired Gen Muhammadu Buhari and his robust military background mantra? It is important to state clearly that a general of a civil war is not a general of insurgency or guerrilla warfare. Also by appointing a gerontocrat and pre-computer compliant individual to head the country’s internal intelligence agency is one of the gravest blunders of the Buhari’s Presidency. The Nigeria Police Force as presently composed and numbered is also a huge economic waste to the country. The Nigerian Army, on its part, knows nothing more than field battle techniques of the pre cold war era.  The concept of intra-State warfare or insurgency is very strange to them. Other than face to face battle strategies, the Nigerian Army is tens of thousands of miles away from modern military science and technology particularly as it concerns counter asymmetric, guerrilla, terrorism and insurgency warfare methodologies.

Nigeria must change its old-fashioned security and safety approaches including immediate review and upgrading of its archival National Policy on Security, which is 36 years old this year. The Policy must be re-engineered around Human Security as well as mental and machine intelligence security or preventive security and intelligence. Nigerian Security and Intelligence community must be digitalized humanly and institutionally as a matter of uttermost immediacy.