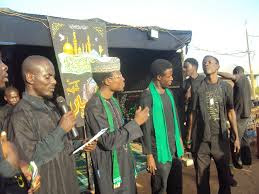 Muslims and some section of the Christian community have on Saturday commemorated the Day of Ashura by way of a procession in the city centre.


The tenth day of Muharram in the Islamic calendar is set aside by the Muslim world to observe the day of Ashura and mourn the brutal killing of Imam Husain, grandson of the Holy Prophet of Islam, and some of the Prophet’s family members by despotic Yazid son of Mu’awiyyah in the plain of Karbala, Iraq, 61 years A.H.

There had been daily mourning sessions, which culminated in a large procession on Saturday that drew about 1 million participants.

The procession which took off in the morning from Maiduguri Road Juma’at mosque amidst tight security, passed through Ahmadu Bello Way and Kano, and terminated at KwanarChanchangi in Tudunwada.

Among the participants were a delegation from the Christian community led by Pastor Yohanna Y. Buru. They include: Reverend David Abaya, Pastor JoelZego, Pastor Maxwell Sanda, Mr. Adun A. Adua and Pastor Muhammad Abdullahi.

In an interview, Pastor Yohanna Buru said, it was a religious obligation for the Christian community to commemorate with Muslims over the monumental tragedy that befell the Household of the Prophet of Islam.

“It is expedient and necessary for us to be with our Muslimsimes of joy colleagues in time of sorrow, just as commemorate with them in times of joy. Moreover, the people killed were those Luminaries in Islam the Prophet Muhammad ordered Muslim faithful to strictly adhere to. We therefore extend our sincere condolence to the entire Muslim Ummah on this day.”

During the terminal speech, Ameer of the Kaduna zone of the Islamic Movement in Nigeria, Shaikh Muhammad MukhtarSahabi said, Ashura is not exclusively observed by the Shi’a but the entire Muslims, because Imam is the grandson of the Prophet of Islam.

He pointed out that, love for the Household of the holy Prophet (Ahlul Bayt), as prescribed by Allah is a religious obligation, while disdain for their enemies and their killers is also a religious duty. “You cannot love Imam Husain and at the same time love those who killed him. It is impossible! You should either love Husain and dislike his enemies, or love killers of Husain and dislike Husain. There is no two-way about this issue.”

He therefore called on the Muslim Ummah to show practical love for the Infallible Progeny of the holy Prophet, as amplified and exemplified by Shaikh Ibraheem Zakzaky, through whose call people are now being more aware.

“In the path of the Ahlul Bayt (AS) genuine religion lies, on their path injustice and tyranny is wiped out”, he added.

Over a million people participated during the procession.

Similar processions were also held in major cities across Nigeria.