Article: Adamu Adamu And His Critics 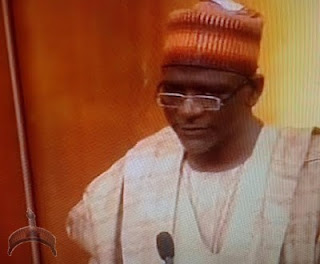 And finally Adamu Adamu has been screened and confirmed as Nigeria’s Minister of Education. While he receives shower of congratulations from well-wishers over a well-deserved appointment, few disgruntled voices are still raging green with envy, since his nomination.


Critics of Adamu Adamu who were uncomfortable with his close association with Muhammadu Buhari foresaw what was coming, and began a campaign of calumny the moment Buhari won the election, so that they could stop what happened today.

It is so unfortunate that in this new era of a great drive towards national integration and reconciliation, some Muslim groups are crying foul that President Muhammadu Buhari has taken into his cabinet a Shi’ite. They are in the media and on pulpits in mosques, spreading venoms on the new Minister of Education and unleashing hate statements on the government of President Muhammadu Buhari.

President Muhammadu Buhari’s close association with Adamu Adamu during the PTF days had been disliked by these people, but only came to the fore now with the appointment of the latter as a Minister. One Doctor in the Department of Mechatronics Engineering, Bayero University Kano, had earlier expressed this envy when wrote in the Leadership newspaper of May 12, 2015.

He warned: “My advice for your Excellency is this. If your promise to tackle insecurity is to be a reality you must cut Shiites down to size. To do that effectively you have to look around you and make sure that no member of this group occupies an important position in your Government. It would be a monumental scandal if Nigerians come to realize that a member of such a lawless group is very close to you and/or holding a key position in your Government. This is regardless of the intellectual prowess (emphasis mine) of the person.”

I looked critically around Muhammadu Buhari before he became Nigerian President, and I found very close to him Adamu Adamu, a person with undisputed “intellectual prowess” the writer confessed. Surely, Muhammadu Buhari is looking for those with intellectual prowess and honesty, irrespective of religion or tribe, to help deliver this country to the desire destination. This he canvassed for and identified such distinguished quality in the appointment of his ministers; this quality the National Assembly saw and screened the nominees.

Adamu Adamu is one person with intellectual prowess and transparent honest acknowledged within and outside the country. His write-ups, laced with intellectualism and honesty said a lot about him. If he happens to be from a particular religious group, so be it. He is the right man for the job. If he happens to be from a group so much detested by his critics, but is accepted by President Muhammadu Buhari (who is also known for truth and honesty) and accepted the legislators and Nigerians, then there is a lot to benefit from people in this religious group that can salvage Nigeria. The first time Nigerians are coming to terms with this truth.

Mr. President, let no blackmail dissuade you from what is right, for some people are  enemies of peace and the society. Keep the good work; for Adamu Adamu, congratulations and demonstrate your intellectual prowess in your new office.

(Usman writes from Kaduna. He can be reached via: ibrahimuksmc@yahoo.co.uk)
Posted by PublicInformationProjects at 14:16