U-Report: Closing Of The Mourning Gathering In Zaria 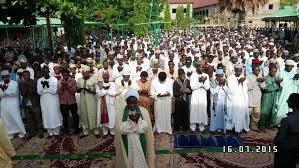 The Daily Ashura Mourning Gatherings at Husainiyyah Zaria wrapped up on 30th of Muharram 1437. The Leader of the Islamic Movement who spoke on various stages of Ashura tragedy, spoke on what happened on 9th and 10th of Muharram between Imam Husain (alaihis salam) and the army of Yazid, the cursed.


Sheikh Zazaky said the issue of Karbala should be viewd as a tragedy which shaped sound ideology, right thinking and sound knowledge of true religion. The Sheikh further said though, people speak of other battles after the holy Prophet like siffin, jamal  etc, they dont want to talk of what happened in Karbala because they cannot be able to absolve the perpetrators of the massacre. The opponents of Karbala therefore, want to keep quiet about Karbala as speaking about it will dig out the realities of what happened in Hunain, Badr and all other battles, he said.

Sheikh further said finding ways to absove the killers of Imam Husain is something impossible; the only thing the enemies of Ashura do is to discourage speaking about the event entirely for fear of bringing out many hidden matters to light adding that the issue of Karbala is coming to the light day by day as people are knowing the true Islam, despite the plots by the enemies-plots which, sometimes, help spread further the teachings and lessons of Ashura tragedy.

The Leader warned those hired to stop what they called spread of Shiism to think twice as the issue of Spread of Teaching of Ahlulbayt is the makig of God. Sheikh Zakzaky said, the teaching is about sacrifice for those ready to sacrifice.

After the lecture there was ziyara and closing prayers.
Posted by PublicInformationProjects at 14:40