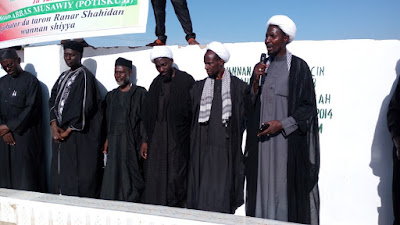 The Islamic Movement in Nigeria has on Tuesday (3/11/2015) commemorated the one-year anniversary of Ashura bomb blast in Postiskum, north-east of Nigeria. Last year, joint military forces detonated bomb and shot at members of the Islamic Movement in Nigeria, while dispersing from the annual Ashura procession. The attack left 28 people, mostly children, dead and many more injured.


The commemoration began with a visit to the graveyard of the martyrs. Mem, women and children in procession carried pictures of the martyrs, reciting elegies and songs of lamentation in memory of the martyrs they described as “our martyrs, our pride’.

At the graveyard, prayers in the form of Visitations (Ziyarat) were offered for the repose of the soul of the martyrs.

Sayyid Mustapha Lawal Nasidi explained how the military detonated bomb in the already concluded procession and opened fire with guns and armoured tank on the people while returning to Fudiyyah School.

According to him, the military intended to demolish the Fudiiyyah School, but was averted.

He said, the incident left 28 people dead, mostly children while 50 were critically injured.

Malam Dawud Azare closed the visit with a prayer, while procession returned to Fudiyyah for the main event.

Before the commencement of speeches at the main event, a drama was stage which demonstrated how the massacre was hatched and actualized a year ago.

National Director of the Martyrs’ Foundation (Mu;assasatus Shuhada), Malam Abdulhamid Bello from Zaria stressed the virtues of martyrdom and the obligation of the martyrs and their upkeep of their families upon the living members.

He therefore encouraged members to fulfil their own side of the bargain by paying their martyrs due, as at when due.

In his speech Ameer of the zone, Sayyid Mustapha Lawal Nasidi briefly narrated how the incident happened, lessons deduced and the benefits reaped by the Islamic Movement from the incident.