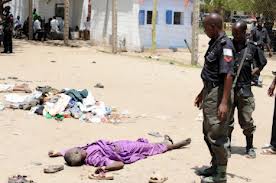 On 18th December 2015, Intersociety released a public statement with over ten pictures detailing how the soldiers of the Onitsha Military Cantonment; under the command of Col Issah Abdullahi, stationed at the Niger Bridgehead, opened fire on group of peaceful and law abiding members of the public, jubilating over the news of the court-ordered unconditional release of Citizen Nnamdi Kanu, which was issued in Abuja on Thursday, 17th December 2015. The soldiers after perpetrating the heinous act as directed by Col Issah Abdullahi; stormed the hospital where the critically injured citizens, numbering over ten were taken, for treatment; and abducted them to an unknown destination. The soldiers had earlier shot and killed eight others and took their corpses away to an unknown destination. It is most likely that their remains have been buried in an undisclosed shallow grave. A total of nine innocent citizens were killed in the shooting including a critically injured citizen that died later at the Paragon Hospital, in Onitsha and over 13 innocent citizens sustained varying injuries from gunshots; shot at close range.


Following our call on members of the public to check the whereabouts of their possibly missing friends, neighbors and relatives in connection with the dastardly act, and report such to us through contact links attached in the statement; more details have emerged. The details include the abduction of two members of the royal family of Ichi Community in Ekwusigo Local Government Area of Anambra State. They are Princes Ogechukwu Okonkwo (31) and Nzubechukwu Okonkwo (25). They are sons of Prince Emmanuel Okonkwo; younger brother of the traditional ruler of Community, His Royal Highness, Igwe Lawrence Nwafor Okonkwo. Prince Nzubechukwu Okonkwo was shot by soldiers in two sides of his stomach and was rushed alongside others, by sympathizers to the Multicare Hospital in Omagba Phase 11, Nkpor in Idemili North LGA of Anambra State.

While they were being attended to in the Hospital, the atrocious soldiers stormed the Hospital at 10:08pm and bundled all of them numbering 22 away including some sympathizers and relatives assisting them. They were taken to the Onitsha Military Cantonment, which is a stone’s throw from the Hospital. The soldiers returned late night with five critically injured ones, who were at the point of death and ordered the director of the Hospital to continue their treatments and not to allow any of them to leave the Hospital. The Hospital director was further ordered to routinely update the Commander of the Cantonment, Col Issah Abdullahi (08053862233). Among those abducted and still hold hostage at the Onitsha Military Cantonment are those that sustained leg and arms injuries from the lethal military gunshots. Till date, the state of their injuries has not been ascertained. Among the sympathizers and relatives of the shot citizens bundled to Onitsha Military Barracks is the elder brother of Prince Nzubechukwu Okonkwo (07019375418); Prince Ogechukwu Okonkwo (08123992263). The 17 citizens taken hostage and seized at the Onitsha Army Barracks on Thursday under the directive of Col Issah Abdullahi are yet to be freed.

“Disclaimer - Circulation of Fake Pictures about Onitsha, Anambra State.Our attention has been drawn to online activities of some masked identities who circulate foreign images of dead persons claiming that they are photos taken from Onitsha, Anambra State. It's clear that some mischievous elements are out to turn facts upside down with respect to happenings in the State. A state adjudged by all and sundry as the safest State in Nigeria which has enjoyed a very peaceful atmosphere since the Chief Willie Obiano took over as the governor... A feat much cherished by the young and old in the Light of the Nation. It's thus laughable to hear some agents of misfortune insinuating unimaginable things about the unfortunate deaths recorded in Onitsha in recent times. Those images and stories behind them are not from Anambra State and thus are false, misleading and mischievous. We urge Ndi Anambra to ignore such ignoble acts and carry on with their legitimate plans to enjoy a beautiful Yuletide Season. Ifeanyi ANIAGOH
SSA Social Media”.

While we will not waste our time and energy, responding to the Government’s infantile remarks, description of pictures of citizens brutally murdered and lacerated by murderous security forces particularly the soldiers of the Onitsha Cantonment; as “fake and foreign pictures”, is a clear case of aiding and abetting of the official butcheries that enveloped the State in recent times. The same State Government that now labels pictures of the murdered and the lacerated as “fake and foreign”; contradictorily acknowledged in its statement of “the unfortunate deaths recorded in the State in recent times”; yet the pictures are fake and foreign. Washing and drinking the blood of the innocent is the worst undoing of any civilian government.

We had expected the Government of Anambra State, under Governor Willie Obiano to act swiftly by directing the ethnically biased and lopsided Onitsha Military Cantonment under Col Issah Abdullahi to stop shooting and murdering innocent and defenseless citizens of the State at no iota of provocation. Onitsha and Southeast are not battle fields. Running away from rag tag Boko Haram insurgents in the Northeast, only to storm the Southeast with retreating AK-47 loaded riffles and turn them against innocent Igbo citizens; with the host Government doing nothing; is nothing but coordinated mass murder. Sadly, this is the same Government elected by people of the State for the purpose of ensuring their security & welfare  at all times, in accordance with Section 14 (2) (b) of the 1999 Constitution.

Till date, there are credible independent sources showing that the Government of Chief Willie Obiano has reached out to any of those lying critically injured in various hospitals in the State; following deadly onslaughts visited upon them by the State’s murderous security forces; in the course of exercising their constitutional rights to peaceful assembly, association, movement, personal liberty and expression. This is not to talk of those brutally murdered on 2nd and 17th December 2015 by the State Government’s Joint Military Taskforce. In these calamitous situations, the Obiano administration has refused to do that expected of it as the chief custodian of public security and morality of the State. No police officer or soldier or navy officer involved in the killings and shootings has been identified and punished till date. No meaningful investigation has been carried out by the State Government; Anambra roads and streets are still flooded with general duties and mobile police officers as well as soldiers with their stock in trade being extortion, vehicular impoundment, shooting and maiming of innocent passerby at no iota of provocation or breach of law. The Onitsha Military Cantonment Commander, whose hatred of Igbo people is steadily manifested in ignoble and murderous conducts of his officers under his watch and directive; is still going about unpunished; likewise CP Hosea Karma and the Governor is busy watching.

As if these were not enough, Governor Obiano, who was democratically elected through constitutional rights to association, assembly, movement and expression; now directs security forces in the State to arrest and prosecute any citizen engaging in unlawful assembly. And one of the results of his “unlawful assembly” ban directive was the mass killing and maiming of innocent citizens peacefully jubilating and saluting the Ojukwu Statute on Thursday, 17th December 2015 at the Onitsha Niger Bridgehead. As we write, five citizens are lying critically wounded at the Multicare Hospital, receiving little or no medical attention owing to lack of funds required to give them adequate treatment. At the Onitsha Barracks, those that sustained other degrees of gunshot injuries are still held hostage without adequate treatment; yet the “Government of Anambra State has reached out to the families of those killed and wounded in the State during the peaceful protests that were hijacked by hoodlums”.

If a democratically elected State Government can come out boldly and shamelessly to describe pictures of the victims of State sanctioned broad day mass murder and maiming as “fake and foreign”, in this ICT age; then, there is not only a sinister motive for official cover up; but also the souls of the murdered have been hardened to torment the State without ceasing and generationally. It also shows that such Government has no respect for the dead and value for human lives. Political lies and falsehoods must not be extended to the sanctity of human lives and respect for the dead.

Apart from rampaging and atrocious killing and maiming of innocent members of the public in Anambra State, judicial torture is also rampant. Scores of innocent citizens who took part in the pro Biafran peaceful protests across the State since 30th August 2015; are languishing in prisons in the State without trial. They were arrested and detained at various police formations across the State and moved to prisons under “Holden Charge”. For instance, Citizens Ogbonna Ihejirika, Pastor Ike God, Mr. Tochukwu, Achike Umunna, Dike Joseph and Gabriel Tiger were arrested by the State Police Command since 13th November 2015 along Owerri Road in Onitsha, during one of the recent peaceful protests for the release of Citizen Nnamdi Kanu; detained at the State CID, Awka for six days and moved to the Nnewi Area Command; from where they were moved to the Nnewi Prison. Thirteen of those arrested in Abuja recently were discharged on 17th December 2015. But in Anambra State, indiscriminate arrests and labeling of those arrested as “IPOB” or “MASSOB” members, are ceaselessly on increase.

Finally, we call on the Government of Anambra State and the Commander of the Onitsha Military Cantonment (Col Issah Abdullahi) to disclose the shallow grave(s) where they buried the said eight citizens murdered by soldiers in broad day light. Those being held hostage at the Onitsha Barracks must also be freed.  All the corpses of those murdered in the State on 2nd and 17th December 2015 as well as on 30th August 2015, must be located, identified and given befitting burials with adequate monetary compensations paid to their immediate families. The medical expenses and hospital bills of those lying critically wounded in various hospitals across the State must be picked up by the Government of Anambra State as well as ensuring that they are given adequate medical treatments. The Federal Government must remove Col Issah Abdullahi, Commander of the Onitsha Military Cantonment, from Anambra State and ensure that soldiers that perpetrated the heinous acts including Col Issah Abdullahi are dismissed from the Nigerian Army and tried for murder.