News Release: Our Brothers With Gun Shots Still In Prison Without Medical Care 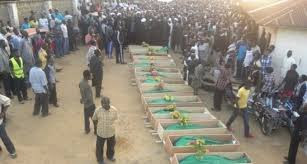 13 Brothers of The Islamic Movement In Nigeria killed by Police in Kaduna last week’s procession.

Reports reaching us have indicated that there are well over 40 brothers of the Islamic Movement in Nigeria (IMN) who are languishing in two prisons in Kaduna after surviving gun shots of the soldiers on Saturday 12/12/15.


Among them 2 died yesterday due to unattended wounds, whose release we are still negotiating with the Police authorities in Kaduna.

Some of the wounded brothers are detained in Open Prison at Barnawa qtrs, while the rest are in Kaduna Central Prison.

Yesterday, five corpses of our Brothers were handed over to us for burial by the Police in Kaduna, who were given proper Islamic burial. However to our greatest shock they were tortured using electric shock and also stabbed severally. It was gruesome.

They were killed after being arrested at the peaceful procession they staged in Kaduna on Tuesday 15-12-15 condemning the continued detention of our Leader Sheikh Ibraheem Yaqoub Zakzaky and the indiscriminate killing of our brothers. Before then on Thursday 17-12-15 four were buried, the following day Friday 3 were again buried after being handed over to us by the Police Command. This made the total number of people killed by the Police on the day of the protest in Kaduna to 13.

We hereby call on the authorities in particular to release or at least give access to our wounded brothers so that we can give them proper medical attention. This we believe will save their lives, unless they intend to see them die of the gun wounds.

We also refute the storyline of the Police that they shot at the peaceful protest because we intended to burn a Police station in Tudun wada Kaduna. This is malicious because it is not in our nature to attack security agents, government properties or fellow citizens during our protests we call MUZAHARA. The Police should please find another storyline but certainly not this one.

Meanwhile, the Kaduna state government has taken over the destruction of all the properties of the Islamic Movement in Nigeria located across Zaria. They have destroyed the remaining parts of the the Hussainiyya and the Fudiyya Islamic Center at Dan Magaji yesterday and today they have commenced the destruction of Darur Rahma at Dembo village along Jos road.