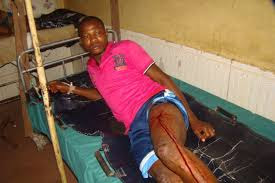 We have it on good authority that four to eight dead victims and 13 critically injured members of the public who were shot dead and critically injured by the soldiers of the Onitsha Military Cantonment in the evening of yesterday, 17th December 2015 at the Ojukwu Gateway, Onitsha Niger Bridgehead; have been taken away to unknown destination by soldiers of the Cantonment.  The soldiers after perpetrating the heinous act at the Niger Bridgehead between 2.pm and 3.30pm; reportedly stormed the Multicare Hospital, along Limca Road, Nkpor, Anambra State, between 8.pm and 9.pm and abducted 13 critically injured citizens brought for treatment. The four dead citizens were also said to have earlier been taken away by the soldiers from the scene of the shooting. Till this moment, their whereabouts have remained unknown. The Onitsha Military Cantonment is commanded by one Col Abdullahi and his GLO mobile line is: 08053862233.


The breaking news of the Federal High Court order for immediate and unconditional release of Citizen Nnamdi Kanu; had resulted in wide jubilations in many cities and communities including Onitsha, Aba, Ogbaru and Nkpor in the Southeast Zone; leading to some people matching in solidarity in various markets, motor parks, streets and roads including the Ojukwu Gateway at the Onitsha Niger Bridgehead. Some solidarity matchers with “Biafran Flags”, joined by other exciting members of the public; numbering less than 200 people, had matched from Nkpor to Upper Iweka and headed towards the Onitsha Niger Bridgehead to salute the statute of Chukwuemeka Odumegwu-Ojukwu, located at the Niger Bridgehead; when soldiers stationed at the Bridge opened fire on them, leading to instant death of four citizens and critically injuring of 13 others. As it stands now, the identities of the dead and critically injured citizens are yet to be ascertained because of spontaneity of the solidarity and jubilation match.

The Navy Checkpoint at the nearby Uga Junction was also turned into a torture chamber during the Army shooting under reference. Scores of innocent passerby were arrested and made to undergo torture and other cruel, inhuman and degrading punishments or treatments. In several parts of the State, innocent citizens including those going to or returning from Christian Night Vigils are arrested in large numbers by SARS and other police patrol teams and labeled “IPOB” and “MASSOB” members. They are further made to pay huge amount of money as bail fees or be transferred to Awkuzu SARS and labeled “armed robbers”.

In most, if not all the major Federal, State and intercity roads across the State, Mobile and General Duties police officers are on rampage; impounding private vehicles and extorting commercial motorists, tricylists and motorcyclists with reckless abandon. It is most likely that the Christmas returnees will be subjected to all kinds of hardship and extortions in the hands of the rampaging soldiers and police officers mounting extortionist roadblocks in Anambra State and Southeast Zone. These graft and grossly anti human rights conducts on Anambra roads are fueled by Governor Willie Obiano’s ongoing radio announcement; directing the security agencies particularly the State Police Command, to arrest and prosecute anybody or group engaging in unlawful assembly in the State or any part thereof. Which is why officers of the Nigeria Police Force, Anambra State Command, have gone rampage; arresting, detaining and extorting innocent road users at will; while the soldiers of the Onitsha Military Cantonment interpret same as licensed to kill and maim. The day of political and judicial justice for the trio of COAS, Onitsha Army Commander and Governor Willie Obiano is steadily matching on!

We call on members of the public to promptly check on their loved ones; friends, relatives and neighbors so as to know if any of them has gone missing and possibly affected by the Army killing and shooting under reference. If any of them is found missing, his or her relatives, friends and neighbors should send his or her identity details to Intersociety’s office at 41, Miss Elems Street, Fegge, Onitsha or  to 08174090052 or via info@intersociety-ng.org and emekaumeagbalasi@yahoo.co.uk. We hold the Commander of the Onitsha Military Cantonment and his COAS as well as the Government of Anambra State fully responsible for the death, injuries and whereabouts of the missing citizens and the murdered corpses under reference.

Attached below are pictures of some of the victims lying on hospital ground and casualty beds of the Multicare Hospital, Nkpor; receiving treatment before the soldiers stormed the Hospital and abducted them to an unknown destination.  One of the deadly injured citizens abandoned by bush side, as shown in one of the pictures; was being taken to the hospital when soldiers violently chased his helpers away and abducted him alongside others to an unknown destination.

Emeka Umeagbalasi, Board Chairman
International Society for Civil Liberties & the Rule of Law