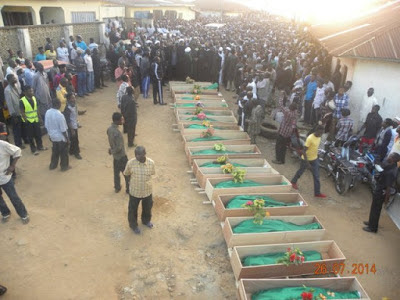 It is recalled that the leadership of International Society for Civil Liberties & the Rule of Law (Intersociety) had 24 hours ago, called for international investigation of the Nigeria’s Chief of Army Staff, Lt Gen Tukur Buratai and the Inspector General of Police, Mr. Solomon Arase, over their individual and vicarious involvement in the two brazen massacres involving unarmed citizens, which took place in Onitsha on 2nd December 2015 and Zaria on 11th, 12th and 13th December 2015. While over 13 innocent citizens were murdered and over 30 critically injured in the Onitsha Killings; hundreds were murdered and scores of others including the leader of the Shiite Islamic Sect; Ibrahim El-Zakzaky critically injured in the Zaria Massacre.


It is also extremely important to inform that in Zaria Massacre, Chief of Army Staff (COAS), Lt Gen Tukur Buratai, was individually and vicariously involved. The Army Chief’s individual involvement followed his personal leadership and direction of a team of the murderous combatants that perpetrated the heinous act. The murderous team of combatants was also directed for the second time by the COAS to go and finish what they started. As far as the Zaria Massacre is concerned, the Nigerian Army is solely involved and responsible. To cap it all, the Nigerian Army authorities had on 12th November 2015 issued a stern warning to Nigerians; directing them to desist from exercising their constitutional rights to peaceful assembly, association and movement. The Army specifically labeled such groups as the Southeast political self determination agitators as insurrectionists and threatened to visit the military might and maximum force against them.

The results of the stern warning were the Onitsha Killings and the Zaria Massacre. The Nigerian Army, in conjunction with the Nigeria Police Force had before then shot and critically wounded peaceful and non violent Southeast self determination protesters in Delta, Abia, Ebonyi, Enugu, Bayelsa, Rivers and Cross River States. The names and identities of the critically wounded innocent protesting citizens under reference are being compiled in all the affected States.

Why it is true that the Nigeria Police Force (NPF) never took part in the Zaria Massacre; the Force was grossly involved in the Onitsha Killings as well as shootings that took place in the areas (States) mentioned above. In all these, Inspector General of Police (IGP), Mr. Solomon Arase was individually and vicariously involved. Apart from being the chief operational officer of the NPF, which earns him individual involvement, he had on 2nd December 2015, issued a police use of terror force threat against the same peaceful groups and citizens and directed his sub commanders at Zones 5, 6 and 9 Police Commands as well as Police Commissioners of Anambra, Imo, Abia, Enugu, Ebonyi, Delta, Rivers, Cross River, Bayelsa, Akwa Ibom and Edo States to maximally exercise their constitutional mandates (use of maximum force)to repel pro Southeast self determination(Biafra) protests and protesters. The result of the IGP’s use of deadly force directive was the Onitsha Killings & Shootings. As if this was not enough, the IGP returned to Anambra State on 12th December 2015, assembled his police officers at Awka and commended them for a job well done; and promised to decorate them with new ranks soon.

Also, till date, neither the Federal Government of Muhammadu Buhari nor the Government of Anambra State headed by Mr. Willie Obiano had shown any moral and compensatory remorse or issued public apologies to Nigerians and the families of the murdered and the wounded over the dastardly acts of their security forces. All the critically wounded are left abandoned in various hospitals while the remains of the murdered, with the exception of late Miss Nkiruka Ikeanyionwu; are still lying uncared at various morgues in Onitsha and its environs. The authorities of the Nigerian Army, Police and Navy, whose officers participated in the dastardly act in Onitsha, are defiantly busy dishing out ceaseless tissues of lie for the purpose of watering down their involvement or extricating themselves from individual and vicarious responsibilities.

The Buhari’s administration, on its part, is also an accomplice in the dastardly acts. Apart from its silence of the graveyard over the two dastardly acts; it recently threw its full support behind the use of deadly force order on non violent and peaceful protesters issued by its Inspector General of Police, Mr. Solomon Arase. Not long ago, over one hundred soldiers were strongly reported by the independent sources to be missing in action and possibly killed by the Boko Haram insurgents in the Northeast State of Borno. Despite public outcries and calls for thorough and open investigations, till date, the Buhari administration has refused to act.

It is on these grounds that our earlier call for international independent and credible investigation into the two massacres was predicated. It is no longer news that the Government of Muhammadu Buhari thrives on immorality, incompetence, human misery, unconstitutionality, falsehood and propaganda. Asking the Buhari administration to investigate the Zaria Shiite Massacre or the Onitsha Military/Police Killings and Shootings will not only be counter-productive, but also amount to being a judge in its own case(nemo judex in causa sua). To ask the Federal Government of Nigeria under Retired Maj. Gen Muhammadu Buhari to look into atrocities committed by its own public officials under its tight watch and directive; is  also tantamount to giving the same Government license to clean up its mess and clear itself of  irreparable culpability.

For instance, one of the eyewitnesses accounts exclusively obtained by a senior reportorial staff of the Guardian Newspaper in Nigeria; revealed that after the massacre, the rampaging soldiers that took away the corpses to destinations best known to them; had come with military camouflages and started putting them on some of the murdered Shiite members; with a mischievous purpose of releasing their pictures publicly and using them as fallen soldiers or soldiers felled by the Shiite bullets.

These explain why we opposed any form of internal investigation under Buhari’s Presidency and called for credible and independent international investigation. As we write, the duo of the Chief of Army Staff (Lt Gen Tukur Buratai) and the Inspector General of Police (Mr. Solomon Arase) are still retained in their positions by President Muhammadu Buhari; thereby rewarding them for a job well done (massacring, killing and gravely wounding unarmed and non violent Nigerians). With these sad developments and their presidential abetment; our question is: what is the rationale behind calling on the same accomplice (Buhari’s Government) to investigate atrocities committed by its men under its seal and authority?

Finally, we restate our earlier call for international enquiries to be carried out into the two mass murders that took place in Onitsha, Anambra State, Southeast Nigeria on 2nd December and Zaria, Kaduna State, Northwest Nigeria on 11th, 12th and 13th December 2015. Such enquiries should specifically include the criminal investigation of the duo of the COAS (Lt Gen Tukur Buratai) and IGP (Solomon Arase) over their roles in the two mass murders and shootings. The international enquiries under recommendation should be specifically carried out by the United Nations; just like it did in Lebanon following the murder of its former prime minister (Rafik Hariri) alongside 21 others in February 2005 and in Pakistan following the murder of its former prime minister (Ms. Benazi Bhutto) in December 2007. The results of the UN enquiries should be followed with setting up of the Special UN Tribunal for Nigeria; to try and punish those found individually and vicariously involved.