News Release: Demand For Justice For The Killing Of Students In Zaria 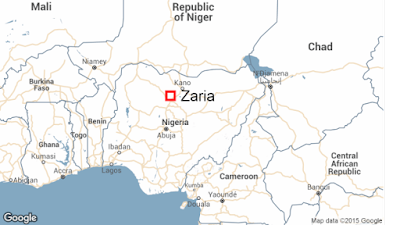 It is now over one month since the Nigerian Army launched a coordinate brutal attack on members of Islamic Movement in Nigeria, IMN, that killed hundreds of people in Zaria after over 27 hours of indiscriminate shooting and bombing by the Army. Despite this display of inhumanity and gross violation of fundamental human rights, to which no remorse was shown by the state authorities for what was undoubtedly a war crime against fellow Nigerians, the home of the revered leader of the Movement Sheikh Ibraheem Zakzaky, two Islamic Centers and the Cemetery/Film Village were demolished with graves dug up and desecrated by the Kaduna state government.


Also, 13 other members of the Movement were killed by the Nigerian Police during a peaceful procession they staged in Kaduna on Tuesday 15-12-15 condemning the continued detention of our Leader of the Movement, His Eminence, Sheikh Ibraheem Yaqoub Zakzaky (H). Following these brutalities by the Army, the IMN has so far compiled a list of 730 missing persons that are either killed or in detention in military
detention facilities, amongst who are hundreds of students and members of the academic Forum of the Islamic Movement.

This is not including the 220 members of the Movement in prison in Kaduna, amongst whom are injured persons denied treatment. These demonic acts perpetrated by the Nigerian Army has not only raised the Army’s human rights abuse records but has also turned a lot of women into widows, children into orphans and has also succeeded in wiping out a lot of families.

All these have led millions of Nigerians into doubting the truth of  existence of any freedom of worship in the country as all those killed were only killed for the crime of going to celebrate the birth month of our beloved holy Prophet Muhammad (SAWA).

This followed an initial cover up by the Army coined as “assassination attempt on Chief of Army Staff COAS” which appeared rather stupid. It was later followed by the “road blockage” theory which was laughable, and the accusation of stockpiling arms to which not a single bullet was found in all the places demolished after a claimed “cordon and search operation”.

Generally, the authorities have remained insensitive about our plight without showing any concern as they unjustly continue to keep our revered leader Sheikh Zakzaky (H) in custody without allowing any access to him. This is not talking about those who have been given mass burial by the Army or even corpses burnt, amongst whom are women and children, some of the women have even been molested before they
were killed by the soldiers as confirmed by some of the survivors who were also tortured after their abduction by them.

All these were followed by propaganda by the government and the Army to paint the Movement and its leader in bad light thereby instigating sectarian sentiments and creating tension in the country. Although we are aware that it is a deliberate attempt to intimidate and instigate us into mob actions, we will never resort to anything outside the normal legal process of seeking redress.

This is evident in the way we acted last year when the same Nigerian Army attacked our members and killed 34 of them including three biological sons of our leader Sayyid Ibraheem Zakzaky. Hence, even now that they have killed three more of his biological sons making six within a year, we still remain undaunted, calm and resolute. These to us are only milestones in the true path of Allah our creator.

Finally, the Academic Forum of the Islamic Movement in Nigeria is hereby calling for immediate and unconditional release of our revered leader his Eminence Sheikh El-Zakzaky (H), and his wife as well as all other members in detention. Corpses of our members killed by the Army, including students should be released to us with immediate effect for burials according to Islamic rights. We call on the government to summon courage and live up to its morality and accept its crime by paying ‘diyyah’ to all affected families and relations. .

Shu’aibu Isah Ahmad
Chairman,
Academic forum of the Islamic movement in Nigeria
Posted by PublicInformationProjects at 20:07