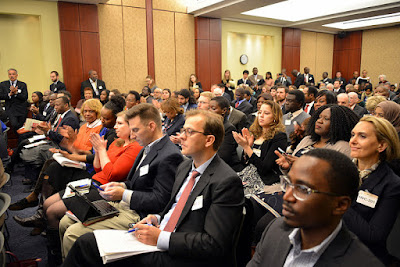 On February 9, 2016, the NAL Council participated in the Africa Policy Breakfast at the US Congress.  The Council delivered expert opinions and recommendations, for a renewed US engagement, in the Nigerian and West African theater; where Boko Haram is still wreaking havoc, even in the midst of relentless onslaught by Nigerian and multinational troops, and where other ethnic strife is starting to ravage Nigeria.


The high-level policy meeting was attended by Assistant Secretary of State for Africa, Linda Thomas-Greenfield; US Congresswoman and Ranking Member of the House Africa-Sub-Committee, Karen Bass (chief host); Congresswoman Fredericka Wilson; and other senior officials from US AID; US Department of Defense; and others.

Assistant Secretary of State Linda Thomas-Greenfield detailed steps the US have taken to engage with Nigeria and other West African states, which have been impacted by Boko Haram.

Ambassador Thomas-Greenfield stated that US engagement so far included reaching out to both state and non-state actors such as “Civil Society, Think-Tanks, NGOs, and Community organizations; as well as military assistance, including ongoing training for the multinational task force engaging Boko Haram”.  Thomas-Greenfield spoke of US commitment to assist in containing insecurity in the region.  She also stated that the “US had provided assistance to the tune of $145 million USD, among other assistance”.

Congresswoman Karen Bass reiterated the need for the US and international community to keep their attention on the continuing atrocities of Boko Haram in the region, until viable solutions are found, given the international dimension of global terrorism.  She recalled the ongoing search for the Chibok girls as a matter of disrepute on Nigeria and the region.

Congresswoman Fredericka Wilson, in her remarks, provided graphic details of her visit to Nigeria, during the crisis of Boko Haram’s kidnap of the 300 School girls.  Congresswoman Wilson recounted her eyewitness account of meeting victims, including child survivors, who survived brutal attacks that left some deformed for life.  She asserted that she was committed to the notion that the girls must be rescued; in order for the world to know there is progress in the war against Boko Haram.

Ambassador Reuben Brigety, who was until recently, President Obama’s appointee as the US Ambassador to AU, spoke passionately about why “Africans must stand up and demand better governance from the leadership”. Ambassador Brigety stated that the complacency of the governed is equally complicit in bad governance and corruption. Brigety bemoaned how Nigeria’s once powerful military had been decimated by corruption at the highest levels.

Dr. Gilpin of the US National Defense University discussed the need to study the Colombian model of intervention as a veritable model to use against Boko Haram.

Mbonu stated that because the diaspora provides overwhelming direct humanitarian support to citizens in the affected theater, through monetary remittances to the tune of $21 billion to Nigeria annually; that the US will be better off tailoring their interventions with hybrid diaspora input.

Mbonu continued to state that without the $21 billion USD the Nigerian diaspora commits to Nigeria, there would be several more Boko Harams in Nigeria and West Africa.  He also stated that other regional agitations in Nigeria, including the resurgence of the Biafra independence movement, and the reverberations of the Movement for the Emancipation of the Niger Delta (MEND), may crystalize into bigger problems for Nigeria, if not handled delicately.

Mbonu while acknowledging that the Nigerian government has huge problems at the moment, courtesy of the current economic and security situation; however, sees these problems as opportunities, for Nigeria to retune its political and socio-economic policies.
Mbonu called for political inclusiveness, based on competence and ability to perform by state actors.  He also called for the patience and active cooperation of the governed, so that all can work in sync; to actualize the true potential of Nigeria and the surrounding region.

Mbonu called for the government of Nigeria to humbly enlist the best minds of Nigeria, wherever they might be, rather than try to replay parochial ethnic considerations in attempting to solve the challenges at hand by themselves.