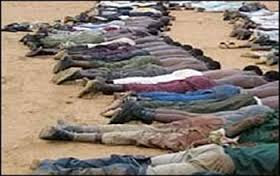 Ceaseless Killing Of Unarmed Citizens In Nigeria: Why Security Chiefs Must Desist From Provoking More Insurgencies Capable Of Plunging Nigeria Into Syrian Styled Violence (Part One)


Government Announcement Of Violent Crackdown On Pro-Biafran Agitators: We wish to recall, Sirs that the Nigerian Army had on November 16, 2015 announced a violent crackdown on those who are peacefully and nonviolently agitating for their constitutional and treaty rights to self determination, development, existence, peaceful assembly, association, personal liberty, movement, life, dignity of human person, expression and fair hearing. These rights are fully guaranteed by the 1999 Constitution in its Chapter Four (Fundamental Human Rights) as well as by various international human rights treaties particularly the African Charter on Human & Peoples Rights of 1981, ratified and domesticated by Nigeria in 1983 and the International Covenant on Civil & Political Rights of 1976, ratified by Nigeria in 1993. These rights are constitutionally and conventionally exercisable by all citizens provided they are exercised peacefully and nonviolently. They are also mandatorily protected and safeguarded by the State, African Union and the United Nations.  The leading group in this context is the Indigenous People of Biafra (IPOB) and millions of its supporters in Nigeria and overseas. The Army’s announcement, which was restated by your office (CDS) on behalf of the Nigerian Military, is contained in the following link: http://www.informationng.com/2015/11/pro-biafra-protests-army-warns-ipob-massob-others-against-secession.html.On 1st December 2015.

As if that was not enough, Sirs, the Inspector General of Police, IGP Solomon Arase, on 2nd December 2015 issued a stern warning and directed his subordinate officers in the Southeast and the South-south zones to apply maximum (deadly violence) force against the pro Biafran self determination agitators particularly the IPOB and its teaming supporters.  The said order of 2nd December 2015 is contained in the following link: http://www.premiumtimesng.com/news/194275-nigeria-police-chief-orders-anti-riot-force-to-maximally-restrain-pro-biafra-protesters. The IGP had earlier threatened to use deadly violence to crack down the peaceful and non violent protests under reference. The threat was issued during his live program on Channels Television in Lagos State 8th of November 2015.  Below is the link to the threat under reference: htmlhttp://www.nairaland.com/2722903/arase-issues-final-warning-pro-biafra

Reasons For Pro-Biafran Peaceful Protests: It is further recall, Sirs that tens of thousands of members of the Indigenous People of Biafra (IPOB) and millions of their supporters had since July 2015 involved in peaceful and non violent street protests in 10 States of the Southeast and the South-south zones except Edo State. They also protested in Lagos, Abuja and dozens of foreign countries in Europe, North America and Asia. The protests peaked between October and December 2015 following the arrest and long and unconstitutional detention without fair charge and trial of the leader of IPOB, Prince Nnamdi Kanu. Citizen Nnamdi Kanu was arrested on 14th October 2015 and had never been released on bail till date despite several court orders either ordering for his conditional release or unconditional release. The causes of these peaceful and non violent protests, Sirs are fundamentally founded on escalation and entrenchment of individual (personal insecurity) and group (structural insecurity) violence against the Igbo Ethnic Nationality in Nigeria.

In other words, Sirs, their peaceful and non violent protests were geared towards drawing the attentions of the Nigerian authorities and members of the international community over escalated and unaddressed threats to  personal security and safety and other unsafe conditions (personal violence) as well as gross geopolitical imbalances and lopsidedness against the Igbo Ethnic Nationality particularly the Southeast Zone in matters of federal distribution of material and human resources (collective violence). Totality of the foregoing is seen by them as constituting a dangerous threat to their existence, development and enjoyment of inalienable and statute rights provided by the Constitution and the international rights conventions. Deprivation of these inalienable rights has made members of the Igbo Ethnic Nationality and other Southern Ethnic Nationalities endangered species in Nigeria. The peaceful and nonviolent protests gained currency following the Buhari administration’s soft spot for politics of exclusion and socio-ethnic divisiveness. The grand purpose of these peaceful and non violent protests under reference is for the Nigerian authorities to address the social anomalies complained of, non-violently, competently and satisfactorily.

Consequences Of Government Violent Crackdown: From our recent extensive investigations, Sirs, at least 80 innocent Nigerian citizens and mostly, members of the Igbo Ethnic Nationality in Nigeria who are sympathetic to pro Biafran self determination agitation, have been killed by Nigerian security forces since 30th August 2015. The victims of the referenced butcheries have never used or advocated violence. The leading killer-security force is the Nigerian Army, followed by the Nigeria Police Force and the Nigerian Navy.

Over 170 other innocent and unarmed citizens have also been shot and critically injured while about 400 others or more have been arrested, charged or detained without trial. Hundreds of them are currently facing charges contrary to democratic free speech in various magistrate courts in Southern Nigeria. Scores are also being detained without trial amidst torture and other cruel, inhuman or degrading treatments or punishment in the hands of the personnel of the Nigeria Police Force (NPF). There are also reported cases of disappearances, abductions and pretrial killing of members of IPOB particularly in Southern Nigeria. In the context of security forces atrocity index, the Nigerian Army accounts for 60% of the atrocities while the Nigeria Police is responsible for 30%; leaving the remaining 10% to other security forces including the Nigerian Navy. The Nigeria Police Force is solely responsible for indiscriminate arrests and disappearances of citizens, whom it labels “IPOB/MASSOB” members.

We further inform, Sirs that 60% of the murdered citizens were shot and killed on the spot by soldiers. Their corpses were picked up by the same soldiers, taken to secret destinations and buried or dumped in secret graves or borrow pits. In most cases, if not in all cases, Sirs,  the said murdered citizens have their hands tied behind their backs, poured raw acid or other defacing and decimating chemical substances and laid face down to avoid easy identification and to erase traces. Those critically shot and injured by soldiers who are at the point of death are routinely shot dead and buried or dumped in a like manner.

Also, out of 12 citizens killed in Onitsha on 17th December 2015, only four who died in the hospital were identified. One of them is Citizen Okwu Friday. The identities of three others cannot be disclosed here as pleaded by their families. The corpses of the remaining eight citizens shot and killed on the 17th of December 2015 were taken away by soldiers of the Onitsha Military Cantonment. Among the 22 murdered citizens in the Aba Prayer/Meeting session of IPOB on 9th of February 2016 are: Uche Friday (30yrs), from Asa in Abia State; Emeka Ekpemandu (35yrs), from Owerre Nkwoji in Imo State; Chiavoghi Chibuikem (Obingwa in Abia State); Nzubechi Onwumere (Orlu in Imo State); Peter Chinemerem Ukasoanya (27yrs), from Isialangwa North in Abia State, Chigozie Cyril Nwoye (23yrs), from Umuna in Ezeagu, Enugu State; Chukwudi Onyekwere (26yrs), from Aboh Mbaise in Imo State; and  Chibuzor Maduagwu (28yrs), from Amauzari in Mbano, Imo State.

The remaining 12 dead bodies of murdered IPOB members were taken away by soldiers of 144 Battalion of the Nigerian Army, located at Asa in Ukwa West LGA of Abia. The 144 Battalion is commanded by Lt Col Kasim Umar Sidi. The Abia State Police Command had earlier admitted publicly of shooting and killing two IPOB members (“for disturbing students of the National High School in Aba”). The Command is presently and officially in possession of the two dead IPOB members it shot and killed.

For: International Society for Civil Liberties & the Rule of Law (Onitsha, Southeast Nigeria)