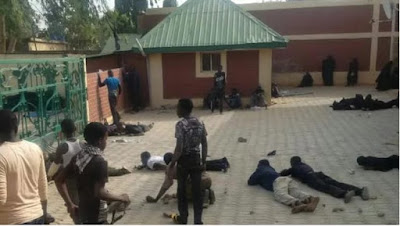 Authorities in Nigeria have come under fire for not providing the  results of an inquiry that was supposed to be conducted into a military massacre of hundreds of Muslims in the northern city of Zaria
in December last year.
Almost two months after Nigerian soldiers attacked the followers of the Islamic Movement of Nigeria and killed hundreds of them in Zaria, the Kaduna State Government has not yet released any details about the investigation.
Critics say the authorities have been conducting a sham investigation into the massacre.
On December 12, Nigerian soldiers attacked Muslims attending a ceremony at a religious center in Zaria, accusing them of blocking the convoy of Nigeria’s Chief of Army Staff Lieutenant General Tukur Yusuf
Buratai and attempting to assassinate him. The Islamic Movement has categorically denied the allegation.
The following day, Nigerian forces also raided the house of the Islamic Movement in Nigeria (IMN)’s leader, Sheikh Ibrahim al-Zakzaky, and arrested him after reportedly killing those attempting to protect
him, including one of the IMN’s senior leaders and its spokesman. Sheikh Zakzaky reportedly received gunshot injuries himself.
The IMN has released photographs of 705 people believed to be still missing from the earlier raid. According to human rights groups, as many as 1,000 people may have been killed in that raid.
In January, the government announced the composition of a so-called Judicial Commission of Inquiry into the massacre.
IMN, which was expected to give evidence to the inquiry panel, however, boycotted the inquiry. It argued that the “commission looks more like a ‘Commission of Indictment’ rather than a ‘Commission of
Inquiry.’”
The movement proposed an independent instigation into the deadly attack under the supervisions of the international community. Human rights organizations have also called for a full investigation into
the deadly attack.