News Release: Corpses Of Murdered IPOB Members In Aba Burrow Pits Set Ablaze And Burnt To Ashes By Suspected Agents Of The Government Of Nigeria 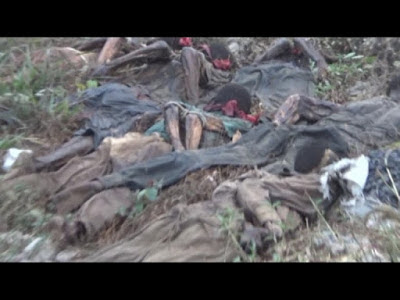 The leadership of International Society for Civil Liberties & the Rule of Law; supported by the Southeast Based Coalition of Human Rights Organizations (SBCHROs), is saddened, shocked and alarmed over the report of burning to ashes of 13 murdered members of the Indigenous People of Biafra (IPOB) whose corpses were dumped in a burrow pit located in Asa area of  the Aba-Port Harcourt Road in Abia State. Three more corpses were also discovered recently in another burrow pit behind a Mosque, which is between the Timber Market and the Arewa Onions’ Market, near Uratta Junction along Aba-Port Harcourt Road in Abia State. The corpses were covered with leaves and soaked with chemical substances strongly suspected to be a mixture of raw acid and embalmment chemicals; for the purposes of disfigurement, erasing traces and making the corpses odorless. They are also strongly suspected to be murdered members of IPOB in Abia State and environs.

But if the purpose of his arrest has to do with credible allegations of “commission of offenses related to corruption” or “street crimes” or traditional and non politically related crimes or offenses, then our advocacy sympathy for him will be very limited and restricted towards ensuring that he fully enjoys all his pre-detention and prosecutorial rights. We have held and still hold that all private, corporate and public citizens including politicians in Nigeria must stay away from “white collar (corruption)” and “street crimes”, and in the event any of them is arrested or summoned by the appropriate authorities, we shall throw our full weight behind their arrest or summoning provided it is done in accordance with the rule of law and respect for human rights.
Signed: