Article: The Changing Face Of Change In Nigeria 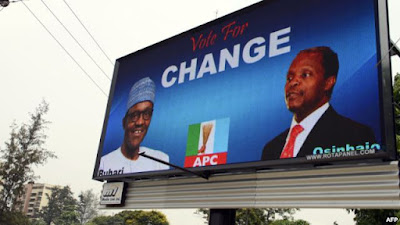 Thanks to the endless monologue of the ‘Change government’, its ‘disunited governing party’ [remember Fela’s Beast Of No Nation – who and who unite for united nations?], and their ‘Common sense revolution’; we now know too much about our past and particularly our recent past; We have managed to acquire far too little understanding of our current challenges and present hardships; and seem to have absolutely no clarity about our future, even of the nearest future!


This seems to me to be the most apt summation of the outcome of nearly one year of change.  Yet as the profound Africa proverbs say, ‘the most likely outlook for Sunday can be glimpsed from how Saturday has turned out to be.

And like anyone who went to primary school and took the school leaving certificate exam would know, there is nothing really common about the ‘common entrance’ exam! Certainly not with respect to the simplicity of the exam.

So here we are 14 months after the sweeping electoral victory; 11 months since what was touted as the historic inauguration and handover of power by a defeated sitting president to the elected candidate of the victorious opposition party; Here we are about 5 months since the constitution and inauguration of the Federal Executive Council; and after one ministerial retreat, and a second retreat of the National Economic Council; and we still have no working budget for 2016.

But there seems to be no direction, because the economy seems to be at best on autopilot, and at worst under the spell of a powerful magician, the problems emanating from the cesspool of the past keep rearing their ugly monstrous heads, becoming ever more resilient as they expand in scope and scale.

Overwhelmed by the scale of the rot it inherited on assumption of power, and clearly fazed by the enormity of the task at hand, the change regime keeps reminding us at the slightest hint of any difficulty that the humongous maladministration and impunity of the recent past is the cause of our present problems.

This worn out lazy excuse, has become so monotonous and routine, that each time they speak now, they sound like broken records/audio CDs.

Of course we know where we are coming from, we know where the rain started beating us, and we know when the rain became a raging storm; but isn’t that why we voted out that sorry excuse for a government? Was that not why we agreed and chorused ‘enough is enough’? Isn’t that the reason we sent that most parasitic of governments parking from power and Aso Rock? Was that not why we embraced the amorphous and ill-defined change?

As an opposition party you approached the electorate, we the people, with a sonorous cry decrying the ‘historic incompetence and barefaced and unprecedented looting of our collective treasury’ being perpetuated and perpetrated with impunity by the party and regime you wanted to replace.

You came to the people fronted by ‘Mr. Integrity’ and swearing that you will end our years of sojourn in the wilderness of waste and irresponsibility.

And the people harkened unto your cries and voted for the so-called party of change. The clear assumption underlying this historic choice appears to me to be very simple and clear: Both the people and the party promising change realized and understood the enormity of our situation, and decided something ought to be done.

So pardon me if I do not and cannot understand why nearly one year after the inauguration of the new government, the government and its party continues to remind us that the government and party that they replaced messed up the polity and the economy.

Why do we need to be constantly reminded of this as if this now governing party is still an opposition party in the course of conduction an election campaign?

The election has long since been won and lost. The next general elections are nearly three years away. In the meantime what is sorely needed but conspicuously missing is governance, actual governance.

But the foundation for the present disarray had long been embedded in the nature and character of the governing party, the APC; in the history and process of its ‘amalgamation’.

The APC, like the PDP that it was put together to supplant from power was not really a political party, at least not in the sense of an organized and mobilised group of peoples and groups, with shared goals and interests; with a common, agreed and shared vision of the society that the party aims to use the instrumentation of governance to build and or shape; and with a shared mission in terms of an articulated plan of action on how this social engineering might be accomplished.

The APC like the PDP, and nearly all of the existing ruling elite parties in Nigeria, is a contraption cobbled together to grab power and distribute resource allocation influence and authority.

This was why the pre-occupation of the party in opposition and even more in power has continued to be with the structure of the party and the consequent sharing formula, rather than with the content and program of the party, the articulation of its vision of society, a detailed outline of what the ‘Common Sense Revolution’ means, and how it will, or might be achieved.

The party was formed and announced without a program or a manifesto. Simply put, there was no common driving vision beyond the grabbing of power.

The party went into the general election campaigns with the promise of change, without any articulation of what this change means for the party, and how the party is going to use the state power it was seeking to implement this change.

It is little wonder that the party, now the governing party has equally been governing without a clearly articulated, common agreed and shared program of governance.

The result is that the government has gone into panic mode over the enormity of the crisis it has inherited; while the party is in a state of disoriented animation.

The combined outcome of all of these is reflected in the way and manner by which the value of the Naira and the power generation capacity of the power sector seem to be in a state of competitive and synchronized free fall. It is also evident in the chaos in the energy sector.

Now after nearly one year in office, wandering about the wilderness of governance, it is clear that all those of us who insisted long ago, and have continued to insist since then, that neither anti-corruption, fighting insecurity, nor job creation are economic programs.

Anti-corruption is the about the way and manner you run your government. It is sorely needed given where we are coming from. Every stolen Naira and Kobo must be recovered, and every common thief who dipped their soiled fingers into our common teal should be punished. And yes every recovered stolen money should be accounted for in a transparent manner. Corruption will and is fighting back, and we need to be vigilant, but all of the above will not automatically translate into inclusive economic growth and national development, without a clearly articulated, debated and shared economic and human development plan of action.

Likewise, job creation is the outcome of your economic policies and programs. There is no such project as job creation. Job is created when they economy is growing and expanding, when opportunities are equitably distributed and can be equitably accessed; when small scale businesses can stay in business, grow, expand, become profitable and so can employ more hands; when new businesses can be set up, and the environment is enhancing of their ability to survive and grow; when labour is adequately compensated and workers welfare are enhanced making it possible for productivity to grow, for workers to save, and for workers to spend more to buy goods and services that have been produced; when the cost of doing business is not prohibitive and the ease of doing business is improved.

When these things happen, wealth is generated, meaning more revenue for public purposes, and jobs are created.

Corruption, insecurity, unemployment and poverty are symptoms of all embracing human development crisis; they need to be mitigated. But the more long term solution lies in addressing their root causes. There are structural and systemic problems inherent in our economy and polity. What are their specific natures? What can be done to address them? How might addressing them translate into real change?

This is what we expect a change government to apply itself to: the articulation through a participatory process including public debates, of an overarching National Economic Development Plan covering the short, to medium and long term. This should be based on a holistic review of all existing policies with a view to harmonising, updating, and modifying them.

But how can this be done in a context where the government has been unable to complete the most routine, yet most foundational process of governance; that of articulating, enacting and implementing an annual budget?

The verdict of history is already taking shape, time is running out, 25% of the tenure is already nearly spent, and yet it is beginning to look like ‘the more the changes, the more they are the same – if we are lucky, or the worse they get, if we are unlucky’.

Nevertheless Luck has precious little to do with this. Let me end from where I started from; whereas the past is linked to the present, and the present to the future; whereas understanding the past enables us to understanding the present, nevertheless the path to the future firmly lies in front of us, not behind us, it requires looking ahead, not getting stuck in the past; and certainly it requires a program of action rather than body language.
Posted by PublicInformationProjects at 06:23