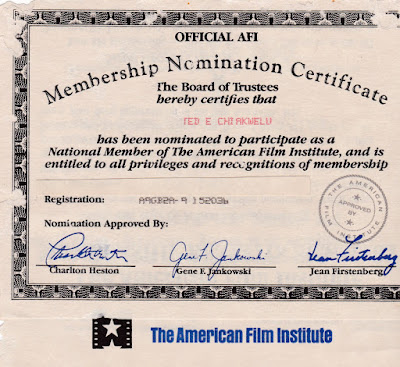 The US based Nigerian intellectual - Emeka Chiakwelu has been nominated into the prestigious America Film Institute (AFI).  Chiakwelu is a policy strategist and environmental consultant based in United States of America. He is the principal policy strategist at AFRIPOL – (Africa Political and Economic Strategic Center). AFRIPOL is a policy public center that primarily analyze and recommends policies for African economic and political advancements. Chiakwelu is also a partner in Texas Storm and Engineering, an environmental consulting firm based in Houston, Texas.


The prestigious America Film Institute (AFI) occupies a superlative cultural epicenter in American film industry especially in Hollywood. The institute is composed of leaders from the film, entertainment, business and academic communities “It is an organization that educates filmmakers and honors the heritage of the moving picture arts in the U.S. A.

“American Film Institute is America's promise to preserve the heritage of the motion picture, to honor the artists and their work and to educate the next generation of storytellers. As a nonprofit educational arts organization, AFI provides leadership in film and television and is dedicated to initiatives that engage the past, the present and the future of the moving image arts.”

Chiakwelu promised that he will use his membership in AFI to speak and spread the well deserve news about Nollywood and its contribution to the global film industry. And to remind the American movie industry that Nigeria’s Nollywood is open for business and investments.

“Nollywood films can be a great source of foreign exchange for Nigeria in the face of declining oil price and can even replace crude oil as a major source of foreign currencies for our country,” Mr. Chiakwelu reiterated.

The strategist therefore reassured that he will urge the lovers of movies and film global community to come and participate in the emerging, prosperous and sensational Nollywood.
Posted by PublicInformationProjects at 01:47