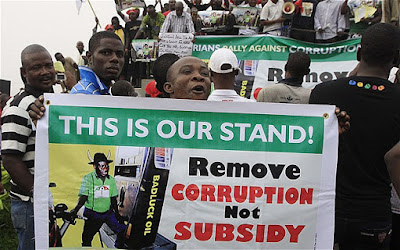 Following the recent pronouncement by the President and Commander in Chief of the Federal Republic of Nigeria President  Muhammadu Buhari on increase in pump price, we the Civil Society Groups in Abia State namely Foundation for Environmental Rights, Advocacy and Development (FENRAD) and Society for Economic Rights and Social Justice (SERSJ) have condemned in strong terms the move by the presidency, describing it as a height of insensitivity, disregard to the plight of hardship faced by the majority of Nigerians at this critical time in our nation’s history,


Rising from a press conference held today in Aba, the commercial nerve centre of Abia State. The Spokesmen for these groups, Comrade Nnanna Nelson Nwafor and Comrade Nwokocha Anozie Innocent condemned the executive’s high handedness with which the increase in pump price was released. They described it as unfortunate, since the Presidency did not give recourse to the plight of majority of Nigerians. In addition to this, the group stressed that it is undemocratic, considering the fact that the various Stakeholders such as the Labour Union, TUC, the Civil Society Groups, the members of the forth estate of the realm (the media) and other relevant stakeholders were not consulted.

From the foregoing, we demand for the immediate reversal of the pump price.

We require the Minister of State for Petroleum Mr. Ibe Ukachukwu to immediately convey a stakeholders meeting of relevant parties with a view to come up with an agreed pump price.

The Minister of State for Petroleum should explain to Nigerians the essence and relevance of the price modulation principles.

Finally, we demand that the President Buhari should relinquish his position as the Minister of Petroleum and at the same time appoint a substantive Minister for Petroleum .With the reality on ground it has shown that the president lack the capacity, experience and knowledge to run the Petroleum Sector, which is a very sensitive sector in the Nigerian economy that requires professional manning the sector.

We call on the government to lift embargo on source of foreign exchange which has made it extremely difficult and strenuous for petroleum marketers to import cargo as guaranteed.