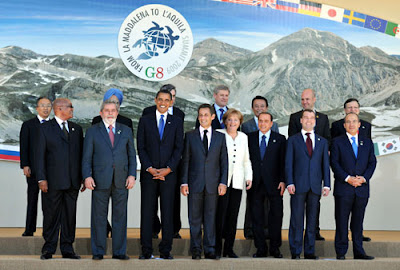 Following intensification of regime malfunctioning of the APC and Buhari led Presidency in Nigeria and ahead of this week’s G-7 Meeting in the Japanese City of Ise-Shima, we have considered it upper most important to expose the double standards of the named developed countries with respect to Nigeria and its affairs particularly under the present Buhari administration. We are deeply dismayed concerning the double-edged policies of the members of the Group of Seven Industrialized or Developed Countries (G-7) and their allies including the EU on one hand and Russia and China, on the other; towards the Federal Republic of Nigeria and its socio-political affairs.


The 42nd G-7 summit in Japan is featuring its seven core members of USA, UK, Canada, France, Italy, Germany and Japan, to be joined by the European Union. The world’s small arms and light weapons’ production markets are dominated by USA and Russia, followed by Germany, UK, Italy, China and other members of old west and east European blocs. Other non-western countries playing leading roles in global SALWs production markets are Brazil, Japan, North Korea, India, etc. Russia and USA alone are credited with hundreds of assault and automatic rifles of different models; likewise mortars, rockets, anti tank and personnel mines and grenades; all referred to as “Small Arms & Light Weapons (SALWs).

To the extent that Nigeria and Nigerians are armed at night and aided in the day through piecemeal humanitarian aids by the above named countries, is a height of diplomatic kill-and-bury and a clear return of the west’s atrocious double-standards foreign policies towards Africa and Asia in the 60s, 70s and 80s. These blundered foreign policies were also applied in the Africa’s Great Lakes Region in the 90s by the west;  Russia and China to an extent, under proxy arming and proxy wars; snowballing into the Rwandan Genocide of 1994; killing almost one million people in three months.

The war mongering policies of the Buhari administration and its confrontational approaches to issues of democratic governance and its challenges have cumulatively heightened communal, tribal and ethno-religious tensions in Nigeria and facilitated fertile grounds for the countries named above; by themselves or through their proxies, to sell their small arms and light weapons (SALWs) at alarming speed and use the country as the latest rogue weapons’ basket of the West African sub-region.

It alarms and saddens us that Nigeria and Nigerians are arming and being armed at alarming level following intensification and entrenchment of anti people and anti democratic policies and conducts by the administration of President Muhammadu Buhari. From various recent scholarly and advocacy studies, Nigeria may mostly have become the world’s second most illicitly armed country after Afghanistan. The battered Republic of Afghanistan with January 2016 estimated population of 33million people is the world’s most illicitly armed country with 10million small arms and light weapons to its homicidal credit, on average of one illicit small arm and light weapon for every four Afghans.

It is credibly estimated that there are 4million-4.5million mostly illicit small arms and light weapons (SALWs) presently in circulation in Nigeria or over 400% spiral increase from estimated one million illicit SALWs in the country in 2000/2001. This simply means that out of every 45 Nigerians (using the country’s estimated 174million citizens); there is small arm and light weapon or SALW. While at least two million SALWs are believed to be in the hands of non-combatant civilians in Nigeria, one million may be in the hands of proliferated communal and States’ armed vigilante groups across the country. The remaining 1million-1.5million others may be in possession of violent non-State actor entities like the Fulani Janjaweed, northern politicians-oiled Boko Haram, Niger Delta Militants, violent politicians and die-hard street and syndicate criminal groups. These SALWs are illicitly sold to Nigerians, who bear and operate them without legitimate authorization by federal laws and authorities. Where laws of some States recognize them as in the case of “militant vigilantism”, such laws are inferior to federal laws and cannot stand the test of time.

The level of militancy in Nigeria presently is alarming and deafening and it is shocking that under the just 12 months of the Buhari administration, militancy and homicidal rates have risen to an apogee. We terribly fear that if nothing proactive and concrete is done to tame this genocidal trend, Nigeria may most likely snowball into “complex humanitarian emergencies”.

It is also estimated that over 25million bullets and cartridges of various models and types, using in powering the estimated 4million-4.5million SALWs in the country; are in circulation, on average of 5 cartridges per SALW. Other than credible independent and scholarly statistics on these SALWs and their propellers; official accounts from Nigeria’s securitization statistical records of the Nigeria Police Force or the National Bureau of Statistics are fundamentally unreliable, if not non-existent.

The recent account by the Presidential Committee on Small Arms to the effect that “60% of Small Arms & Light Weapons in Nigeria are locally manufactured” is fundamentally contentious, unscientific, unreliable and unverifiable. The stark reality is that 98% of small arms and light weapons in roguish and credible circulation in Nigeria are imported; and under licit and illicit circumstances. There are alarming licit and illicit arming going on in the country under the malfunctioning watch of the Buhari administration. That is to say that there is arming at dangerous speeds by State-actor and non-State actor entities in the country. In the area of State actor arming, the Federal Government through its Defense, Interior and NSA establishments; is arming the State at a dangerous speed.

The porosity of the State management of its armories and discriminatory enforcement of gun-control policies in Nigeria is also alarming; most especially whereby belligerent members of some ethnic nationalities like “Hausa-Fulani” found bearing automatic assault weapons without license are treated as untouchables while citizens of other ethnic nationalities like Igbo Ethnic Nationality who hardly bear single barreled guns under non-street crime circumstances, not to talk of assault rifles; are indiscriminately targeted and mass-murdered by the security agencies.

Licit State trade in small arms and light weapons is carried out between Nigeria and a number of world’s leading manufacturers of small arms and light weapons such as USA, China, Russia, UK, Canada, France, Germany and EU. This is facilitated through Nigeria’s international waters and aviation (as case may be). The Nigeria’s State arms trade is conducted through its ministries of defense and interior and the office of the National Security Adviser.

Illicit arms trade, on the other hand, is carried out using Nigeria’s southern and northern borders and such arms are commonly found in leading markets located in Lagos, Maiduguri, Kano, Onitsha and Aba. The cross-border sources of these small arms and light weapons are traced to two categories of sources of northern and southern destinations. While small arms dominate the southern destinations of Togo, Benin Republic, Ghana, Liberia, Sierra Leone and Ivory Coast; both small arms and light weapons are illicitly couriered in large quantity from northern destinations of Chad, Niger and Cameroon Republics; partly sourced from Libya, Somalia and Sudan.

All the illicit small arms and light weapons (SALWs) produced by the named developed countries found their way into Nigeria through third party or proxy means facilitated by the producer-countries. Some of them landed into Nigeria through their first country of use (i.e. Libya, Somalia, Ivory Coast, Liberia, Sierra Leone, Sudan, etc), while others landed directly from their virgin sources or countries of production (i.e. SALWs in the hands of Niger Delta militants, disbanded Nigeria’s Boko Haram, etc); yet some originate from State armories (i.e. SALWs in the hands of Fulani Janjaweed).

It is also very important to point out that the Republic of South Africa still parades the largest number of private military corporations or firms on African Continent; specializing in cross-border trading of mercenaries and sales agents for western countries’ bound illicit small arms and light weapons (SALWs) shipped and sold in Africa under “musketeers” (producers) and “profiteers” (marketers) arrangements. The two referenced parties are commonly referred to as “profiteers of violence”. South Africa is also the only African country to have possessed a nuclear weapon in the 80s and the first country on earth to disband same in early 90s.

In all, Government to Government trade in small arms and light weapons (SALWs) are classified as “licit arms trade”, while sale and shipment of same through illegal means are classified as “illicit arms trade”. Such arms can also be purchased illicitly or illegally and used licitly or legally. In the world over, a set of laws governing the use of arms, particularly small arms are classified under “mala prohibita” (laws with different contents and applications in different countries and cultures). This further means that while it is legally permissible for non-combatant citizens to carry certain weapons in a country like USA, it is legally forbidden to do so in another country like Nigeria. State to State trade in small arms and light weapons (SALWs) as well as their use is governed or regulated through sub-regional, regional and international treaties and customary international laws.

This is governed by the Firearms Arms Act of 2004. The Act categorizes bearable small arms into prohibited firearms and personal firearms. Any citizen can bear “personal firearms” (i.e. single or double barreled guns, pistols, pump action guns, etc) provided he or she is issued with a renewable license by the Inspector General of Police or through his or her principal subordinate. This is contained in Section 4 of the Act. The procurement and use of “prohibited firearms” (i.e. assault weapons such as A-K 47 guns, machine guns etc) by a citizen is conditioned to a presidential license. This is also contained in Section 3 of the Firearms Act of 2004. For war-like or anti-violent crimes control small arms and light weapons, the State security agencies are empowered by law to deploy them when necessary and under strict regulations. But in practice, these are observed in gross breach by concerned security establishments particularly the Nigeria Police Force.

For purpose of clear understanding, small arms and light weapons are weapons that can be carried by a single person, either for military or civilian use. They are commonly referred to as “SALWs” and are relatively cheap, available in abundance, highly portable, long lasting and easy to carry or operate. They range from pistols, assault rifles, machine guns, grenades, mortars to anti tank systems. By light weapons, they are referred to as weapons that are man-portable or transportable by light vehicles and that do not require much in terms of service and logistical back-up training. They comprise small caliber canons, light support weapons, combat grenades, anti-personnel mines, mortars, anti-tank weapons, anti-tank mines, etc.