News Release: New Plots Against Members Of The Islamic Movement In Katsina 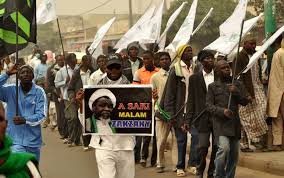 A very reliable report reaching us with regards to the scheduled visit of President Muhammadu Buhari to Katsina is that the authorities, along with security forces have completed devising a devilish plot to attack members of the Islamic Movement in Katsina.

The stratagem involves the use of touts dressed as political or other opponents, who would lay ambush on the path of the President during his visit in Katsina. These paid touts would throw stones at the President and shout him down. They would then attribute this to members of the Islamic Movement and use that as a basis to launch fresh attacks on members of the Islamic Movement in continuation of the brutal clampdown they started in Zaria, which obviously they are yet to complete.
The report further shows that they would arrest some identified prominent members in the mosque during the Friday prayers should they escape unhurt from the attacks.

The whole of this last Thursday was used in plotting this scheme with people earmarked to execute the plan, including some judges who would be required to give long term sentences for those arrested and brought before them. That way, they hope to attack and forcibly prevent the marking of the Annual Martyrs Day slated for Saturday in Katsina. The same day has earlier been marked in Zaria, Kano, Potiskum, Gombe and other towns across the states without an incidence.

We therefore wish to draw the attention of the public that members of the Islamic Movement have never attacked any individual or group for any reason whatsoever. In fact, revenge has never been our modus operandi. We solely rely on Allah alone and He is sufficient for us as a protector and helper. Thus, should anyone see such unruly conduct in Katsina, it should be known and taken as a design by the authorities. We completely dissociate ourselves from such.

What the authorities ought to pre-occupy itself with is implementation of people-oriented programmes and seeking ways to alleviate the suffering of the masses rather than plotting to shed blood. We call on the people and especially members of the Islamic Movement to remain vigilant and avoid responding to any provocative actions by the authorities or their paid agents. We would go ahead with our scheduled Annual Martyrs Day as planned. Members of the Islamic Movement should remain orderly as usual.

May Allah annihilate our enemies.

Ibrahim Musa
President
Media Forum Of The Islamic Movement In Nigeria
0805 078 6093
Posted by PublicInformationProjects at 05:09