News Release: Reversing The Trends In Sexual Violence In Africa 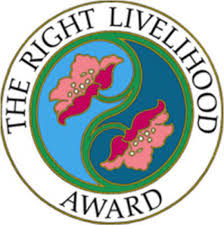 In honour of Africa Day 2016, three Right Livelihood Award Laureates from Africa are speaking out to reverse the current trends of sexual violence on the continent.

The first step to countering sexual violence is knowledge, as lawyer and Laureate Jacqueline Moudeina demonstrated when reporting the atrocities committed during the rule of former dictator Hissène Habré in Chad. Rape was one of the crimes that the ongoing trial in Senegal – with the final verdict expected on 30 May – has revealed: "One of the hardest, most painful things for a woman is to say, 'I was raped.' These women have shared details they have not spoken of for more than 25 years. That is courage," said Moudeina.

Somali Laureate Asha Hagi Elmi, co-founder and Chair of Save Somali Women and Children, fought sexual violence in her country by empowering its women: during the national reconciliation process, she gave life to the so-called Sixth Clan, made up only of female members. As she said: “It has always been the case in all armed conflicts that women and children are the first and last victims of war, though war is neither their desire nor their decision. Women have been killed, raped, tortured and displaced.”

Hagi Elmi has also been the chair of the Somalia-National Committee on Female Genital Mutilation (FGM) and Harmful Traditional Practice, in a country with the world’s highest percentage (98%) of girls and women who have undergone FGM over the past decade. However, it is encouraging that 24 out of 54 countries in Africa have banned FGM by law.

At Panzi Hospital, Laureate Denis Mukwege and his colleagues have treated more than 45,000 women who had been raped in the Democratic Republic of Congo. While striving to obtain international recognition for the term  rape as a “weapon of war”, Dr Mukwege points his finger at men: "Over the past 100 years, women have fought for and won many rights—there has been huge progress. Now the question must be asked: should men not also make an effort in the 21st century, if only to change their mind-set?”

Although sexual violence and FGM in Africa are far from eradicated, these Laureates prove that it is possible to reverse the trends by working with the media and the international community to shed light on the crimes, and to empower all those women who have chosen to speak up and stand up against them.