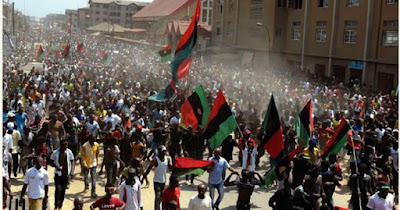 Barely five hours after our latest scorecard on one year in office of the Buhari Administration was released, torrential calls came to us concerning the massacre of innocent and unarmed citizens in three locations in Anambra State today. The locations are Nkpor, Ifite-Dunu and Nnewi. Those responsible for the latest massacre just like those of 2nd and 17th of December 2015 are members of the Anambra State Joint Security Taskforce, constituted by Governor Willie Obiano in his capacity as the Chief Security Officer of Anambra State, who are answerable to Gen Muhammadu Buhari in his capacity as the Commander-in-Chief of the Nigerian Armed Forces.


Personnel of the Onitsha Military Cantonment under Col Issah Abdullahi and the Nigeria Police Force, Anambra State Command, under CP Hosea Karma participated in the massacre. Also participated are reinforcement detachments from the 82nd Division of the Nigerian Army in Enugu as well as personnel of the Delta State Police Command who blocked the Abraka end of Asaba in Delta State. They were reportedly under a firm directive from Gen Muhammadu Buhari’s Presidency; supervised by the Obiano administration to “crush the procession at all costs”.
From detailed information available to us, 30th of May of every year is a day  set aside since 1966 as “International Igbo Heroes’ Day Celebration” in honour of all those that died for the cause and emancipation of Igbo Ethnic Nationality in Nigeria. The event is also marked in over thirty countries across the world. In solidarity with the event, all the major markets in Onitsha and environs were closed by traders in support of the event. It was on account of this that leading Igbo Self Determination movements including IPOB and MASSOB designated today in Anambra State to mark it with prayer session and observation of minutes of silence for their slain compatriots. Following this, the leadership of IPOB World Wide wrote the Commissioner of Police Anambra State Command, Mr. Hosea Karma, to notify the Command formally of its intention to hold prayer session near the Nkpor-Umuoji Road Government Motor Park, in Nkpor, Idemili North LGA of Anambra State.
Following the receipt of the letter, the CP, Anambra State, Mr. Hosea Karma, instead of inviting the signatories to the letter or their representatives to agree on modalities for the Prayer Procession or alternatively respond publicly to same concretely; the notification letter was used by the addressee to plot violence of alarming magnitude against the unarmed and nonviolent Self Determination activists; leading to massive deployment of heavy security personnel and dead weapons. Inter-service agency meetings were further held and strategies mapped out against the IPOB and MASSOB planned prayer procession. The latter, banking on its notification letter, was taken unawares and ambushed; with its innocuous letter turning into “an invitation for State violence”.
Heavy shootings and blockades by soldiers and police started in the late night of 29th of May 2016 during which St Edmund Catholic Church situated along Umuoji Road were invaded by soldiers of the Onitsha Military Cantonment in the hours of the blue law, between 1.30am and 2am, leading to opening of fire on some IPOB and MASSOB members who arrived late night of 29th of May and sought to catch some sleep before 12noon of today, fixed for the prayer session and observation of minutes of silence for their fallen heroes. The Church is a stone throw from the venue of the botched event.  Scores of others were shot and taken away by soldiers to Onitsha Army Barracks.
Soldiers and police also blocked all major roads leading into Onitsha and environs starting from late night of 29th of May 2016. The major roads blocked are Owerri Road, Asaba-Onitsha Head Bridge, Onitsha-Upper Iweka, Onitsha-Nkpor Expressway, Oba-Nnewi Road, Ojoto-Umuoji Road, Nkpor-Ogidi-Old Road, etc. Dozens of those coming from Port Harcourt, Aba, Owerri, Enugu, Asaba, etc were arrested late night and dumped till this moment at Onitsha Army Barracks. Some of them were shot in the same night and killed with their corpses taken away.
As usual, those shot, killed or wounded were dumped in the military hilux vans and taken to Onitsha Army Barracks. As if these were not enough, the military and police personnel with dozens of security trucks stormed the proposed venue and opened fire with live bullets on hundreds who had gathered for the prayer session. The police and soldiers later went on rampage shooting indiscriminately in all directions. Those who  came through  Ifite-Dunu  and Ogbunike to Nkpor were ambushed and shot at in their large numbers; likewise those coming through Ojoto-Umuoji Road as well as those coming through Onitsha-Owerri Road.
The soldiers and police in their hilux vans later traced those shot dead and critically injured ones and picked them from the scenes and headed towards the Onitsha Army Barracks. Two eyewitnesses (one journalist and one IPOB member) told Intersociety that they saw soldiers with three hilux vans with scores of slain citizens. The journalist said he counted six dead bodies in a military hilux, while the IPOB member said he saw two military hilux vans filled dead bodies. Efforts made by sympathizers and IPOB members to take the critically shot victims to hospital were rebuffed by soldiers and police who got them arrested. For now, three hospitals: Nnamdi Azikiwe Teaching Hospital, Uzondu Hospital and Multicare Hospital are said to be treating some gun-shot victims.
The urgency of this statement is to put the records straight and disabuse the sacred minds of Nigerians from unpardonable and serial lies of the authorities of the Nigerian security forces particularly the Nigerian Army who have already started dishing out tissue of lies over the massacre. As we wait for further updates and comprehensive compilation of casualty figures from credible independent sources including Intersociety, we solemnly appeal to the general public to check the whereabouts of their loved ones particularly those who passed through the areas under reference. We are also aware that a number of passersby, artisans and traders nearby were either shot and wounded, or shot and killed or arrested and taken away by soldiers. For the purpose of any information from any member of the public regarding their missing loved ones linked to the massacre, we urge such persons to contact the phone numbers or email addresses below.
Signed:
For: International Society for Civil Liberties & the Rule of Law
Emeka Umeagbalasi, Board Chairman
Mobile Line: +2348174090052
Email: info@intersociety-ng.org, emekaumeagbalasi@yahoo.co.uk
Barr Obianuju Igboeli, Head, Civil Liberties & Rule of law Program
Mobile Line: +2348034186332
Posted by PublicInformationProjects at 02:45