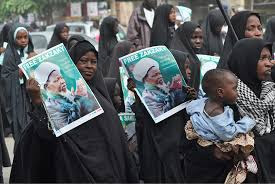 The Islamic Movement in Nigeria will never take up arms in the name of avenging the incessant killing of its members by the Nigerian Army in Zaria last December.


This declaration was made by the representative of the Katsina center of the IMN, Sheikh Yakubu Yahya while revealing plans by the authorities to mischievously instigate some people into arms struggle in the name of the Movement.

He explained that the movement is aware of plans to arm some people in the name of the movement with the intention of blackmailing it and destroying its hard earned peace records.

Sheikh Yakubu stated that it is not possible to use force in establishing the Islamic system adding that it is only through enlightenment and exemplary behaviors that victory would come.

He explained that taking of arms is never a part of and will never be a part of the policy of the IMN calling on those who think otherwise to wade off the wrong thoughts.

The respected scholar said that the authorities are mischievously working to create a group within the movement that will resolve to taking up arms against military and police installations across the country claiming that they are avenging the killing of IMN members.

He called on members of the IMN never to give those mischief makers a chance to achieve their devilish machinations while he advised them to ponder because taking up arms is against the entire interest of the movement and its leadership.

Sheikh Yakubu called on the IMN to continue in the line of prayer as success is certainly close-by and never to engage in anything that will destroy the reputation of the movement.