News Release: A Member Of Islamic Movement In Nigeria Is Dying In Prison 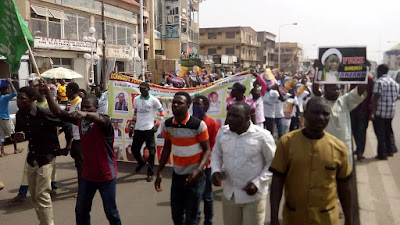 It is obvious that Nigerian government has not had enough of our blood over their heads. Even with the extrajudicial killing of over a thousand IMN members,  its attention has now shifted to ensuring that those who survived the initial onslaught in Zaria, who are at the moment being arbitrarily detained die quietly in detention through denial of medical attention.


Presently, one of such detainees so denied access to medical attention is Aliyu Adamu, a final year undergraduate student in the department of Electrical Engineering, ABU Zaria. He has a serious brain injury that has made him to have multiple convulsions without respite in Prison following trauma he suffered earlier during attack on IMN in Jos. That injury is clearly aggravated by the brutal Zaria massacre, and made worse by refusal of authorities to allow him access to proper medical care. He is now at risk of dying in custody or suffering a permanent neurological damage if the government doesn't act fast to save him.

Similarly, another member at risk of dying in the Kaduna prison is Abdul Hadi, who has severally fainted in detention. He even collapsed in court two weeks ago, yet he is being denied access to proper medical treatment. There are close to ten others with illnesses and injuries of varying degrees of severity being detained without access to proper medical care.

It can be recalled that two other members of the IMN had died in prison custody since the brutal Zaria onslaught due to lack of proper medical care .